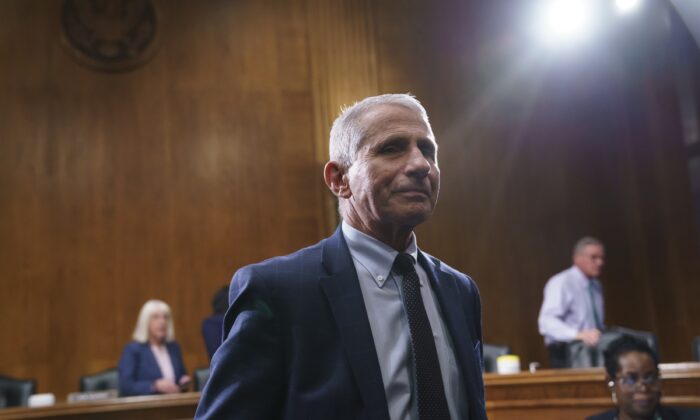 An unknown number of foster children were abused while participating in an HIV experimental drug treatment program overseen by Dr. Anthony Fauci in the 1990s, according to Robert F. Kennedy Jr. in his new bestselling book.

Kennedy’s book, “The Real Anthony Fauci: Bill Gates, Big Pharma, and the Global War on Democracy and Public Health,” takes a critical look at the U.S. health response to the coronavirus pandemic, revisiting some decades-old scandals in the process.

As a longtime gadfly to the pharmaceutical industry, Kennedy is no stranger to these controversies. But when doing research for his book, he found information on Fauci’s connections to child experimentation that he said shocked him.

“The chapter on Tony Fauci’s experiments on children and animals … it was stunning,” Kennedy told The Epoch Times.

The chapter referenced, “Dr. Fauci, Mr. Hyde: NIAID’s Barbaric and Illegal Experiments on Children,” recounts how the NIAID funded experimental treatments for HIV-infected foster care children throughout the 1990s. The chapter relies in part on a May 2005 exposé from The Associated Press, which reported that many foster children were experimented on without having guardians advocating for them.

During an experiment on the drug dapsone, “Researchers reported some children had to be taken off the drug because of ‘serious toxicity,’ others developed rashes, and the rates of death and blood toxicity were significantly higher in children who took the medicine daily, rather than weekly,” AP reported at the time.

“At least 10 children died from a variety of causes, including four from blood poisoning, and researchers said they were unable to determine a safe, useful dosage. They said the deaths didn’t appear to be ‘directly attributable’ to dapsone but nonetheless were ‘disturbing.’”

The AP article doesn’t mention NIAID or Fauci, but evidence to that effect was revealed during a congressional hearing later that month. The evidence included a letter entered into the congressional record from Jonathan Fishbein, who at the time was the director of the Division of AIDS (DAIDS)—a bureaucracy within Fauci’s NIAID.

“The failure of numerous DAIDS/NIAID-sponsored researchers and their institutions to assure that foster children enrolled in their research were appointed individual advocates, even where a foster parent exists, constitutes a violation of the terms of their grant awards,” Fishbein said in a May 2005 letter to Daniel Levinson, the then-inspector general for the Department of Health and Human Services.

“I ask that your office immediately conduct an investigation to determine which foster children were denied their rights under the law and to seek a full recovery of grant funds from the researchers responsible for this lapse.”

The number of children who died as a result of the NIAID-linked experiments on ICC foster children is in dispute.

Kennedy’s book cites an investigation into the matter by the nonprofit Vera Institute of Justice in January 2009. That investigation found that 80 of the 532 children who participated in clinical trials or observational studies died while in foster care, and 25 of them died while enrolled in a medication trial—but Vera medical staff didn’t find that any child’s death was caused directly by clinical trial medication.

However, investigators said in the report they were denied access to certain medical records, making it impossible for them to determine how some aspects of the child experiments were handled.

“Citing confidentiality laws, the New York State Department of Health (NYSDOH) refused multiple requests from Children’s Services that it use its supervisory authority to allow staff from Vera or Children’s Services to review clinical trial research or medical records,” the report said.

“This limited Vera’s review in several ways, including the ability to fully document the frequency and severity of toxicity (side effects), the individual outcomes of trial participation for the children in the review, and the existence of valid, signed informed consent documents.”

“Fauci pooh-poohed all those deaths,” Sharav said. “The very best thing you could say about Dr. Fauci is that he failed to get involved when problems emerged on his management watch.”

Sharav—the founder of the Alliance for Human Research Protection and who played a key role in exposing the child experiments—said political pressure contributed to the investigation concluding that the experiments didn’t “directly” cause any of the 80 deaths.

“You can’t imagine how much twisting went on,” Sharav told The Epoch Times. “That’s how it gets buried.”

The NIAID didn’t respond to a request for comment from Fauci or the organization by press time.

Kennedy, who also spoke to Fishbein for his book, said he’s confident that Fauci personally knew and sanctioned experiments on children.

“Multiple people who watched Fauci operate at NIAID—everyone who sees his operation consistently—testify that he knows every single grant. And these grants were at the center of his interests at the time, because he was trying to figure out ways to expand the market for these HIV drugs,” Kennedy said.

“He already introduced drugs to people who were HIV-infected but not sick. And the next step would be to get the drugs to children, and then as a step after that was to try to get them approved for pregnant women for maternal transmission.”