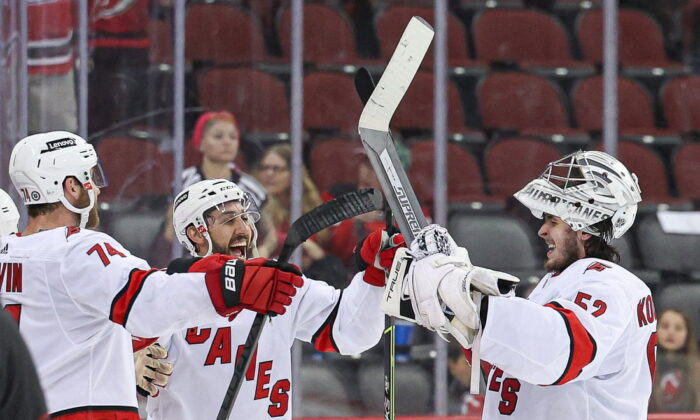 Montour scored his 10th goal of the season when he poked the puck past goaltender Jack Campbell at the end of a 2-on-1 with Mason Marchment, who had two assists in the game.

Claude Giroux had a goal and two assists, and Aleksander Barkov had a goal and an assist for Florida. Mitchell Marner and Justin Holl scored for the Maple Leafs. Both goaltenders were tested. Campbell stopped 32 shots for Toronto. Sergei Bobrovsky made 34 saves for Florida.

Seth Jarvis scored at 1:39 of overtime to complete a huge rally for visiting Carolina in a victory against New Jersey.

Brady Skjei and Nino Niederreiter scored in the last 5:36 of regulation as Carolina produced a third-period uprising for the second game in a row. Niederreiter’s tally came with 1:56 left after the Hurricanes went with an extra skater.

Steven Stamkos and Nikita Kucherov produced three-point games as Tampa Bay handled visiting Nashville. The Lightning captain and Kucherov each posted a goal and two assists, with Kucherov finding the net for the fifth straight game.

Victor Hedman had a marker and a helper, and Anthony Cirelli, Ross Colton and Pat Maroon tallied for the Lightning. Backup goalie Brian Elliott stopped 19 shots.

The Predators got goals from defensemen Roman Josi and Alexandre Carrier. Juuse Saros surrendered all six goals on 30 shots before being replaced early in the third period by David Rittich, who made nine saves.

Mark Kastelic scored his first two NHL goals and got into a fight, and Ottawa used a five-goal second period to defeat Montreal and win its third in a row.

The loss was Montreal’s eighth in a row. Parker Kelly and Austin Watson each had a goal with an assist, Josh Norris posted his 34th goal and Anton Forsberg made 44 saves for the Senators, who snapped an 0-2-1 home rut. Playing one night after the death of legend Guy Lafleur, who was honored with a pregame video tribute, Montreal got a pair of goals from Rem Pitlick and Cole Caulfield’s 20th.

Riley Sheehan and Yanni Gourde scored for the Kraken, who blew a two-goal, first-period lead for the second consecutive night after a 6–3 loss Friday at Minnesota. Goalie Chris Driedger stopped 28 of 31 shots.

Arthur Kaliyev had a goal and an assist to help Los Angeles inch closer to a Stanley Cup playoff berth with a win against visiting Anaheim.

Matt Roy, Alexander Edler, and Alex Iafallo also scored, and Jonathan Quick made 19 saves for the Kings, who moved seven points ahead of the Vegas Golden Knights for third place in the Pacific Division.

The Kings can clinch a playoff spot by earning at least two points over their final two games—at the Seattle Kraken on Wednesday and the Vancouver Canucks on Thursday—or if Vegas loses in regulation to the visiting San Jose Sharks on Sunday or at the Dallas Stars on Tuesday.

Timo Meier collected one goal and one assist to lead host San Jose past Chicago in a matchup of struggling teams.

Jasper Weatherby, Tomas Hertl, and Nick Bonino also scored for the Sharks, who have two wins in 13 games. Goaltender Kaapo Kahkonen made 27 saves in an outstanding performance.

Tyler Johnson replied for the equally floundering Blackhawks, who have only two wins in 14 games. Goalie Kevin Lankinen stopped 15 shots in a losing effort.

Elias Lindholm reached the 40-goal mark for the first time in his career for the Flames. Brett Ritchie, Nikita Zadorov and Johnny Gaudreau also tallied for the Pacific Division champions, who are on a 9–1–1 roll and posted the second-best point total in franchise history. Goaltender Dan Vladar made 28 saves and Chris Tanev collected three assists.

Quinn Hughes, Conor Garland and Elias Pettersson replied for the Canucks (38–30–11, 87 points), who are six points out of a playoff spot with three games remaining. Goalie Thatcher Demko stopped 25 shots.

Logan Brown, Ivan Barbashev and Brandon Saad also scored for the Blues, who extended their point streak to 15 games. Jordan Binnington made 16 saves to earn the victory. The Blues pulled even with the Minnesota Wild for second in the Central Division but Minnesota has a game in hand.

Nathan Smith, Bokondji Imama, Michael Carcone and J.J. Moser scored for the Coyotes, who are winless in their last 10 games (0–8–2). Harri Sateri made 28 saves in defeat.

Rasmus Dahlin snapped a tie by scoring the first of three unanswered second-period goals for Buffalo, which built its longest winning streak in more than three years by beating visiting New York.

Casey Mittelstadt scored in the first, Tage Thompson and Vinnie Hinostroza scored later in the second, and Jeff Skinner added a goal in the third for the Sabres, who have won four straight. It’s their longest winning streak since a 10-game run Nov. 8-Nov. 27, 2018. Goalie Dustin Tokarski made 19 saves.

Mathew Barzal scored in the first, and Noah Dobson and Kieffer Bellows scored fewer than two minutes apart in the third to generate a late comeback attempt by the Islanders, who have lost four straight. Goalie Ilya Sorokin recorded 30 saves.

Kris Letang had a goal and two assists to lead Pittsburgh to a road win over Detroit.

Evgeni Malkin scored two goals, and Sidney Crosby and Rickard Rakell each had a goal and an assist for Pittsburgh. Casey DeSmith stopped 23 of 25 shots for Pittsburgh.

Jakub Vrana and Michael Rasmussen scored in defeat for Detroit. Thomas Greiss stopped 18 of 23 shots in two periods for the Red Wings, before Alex Nedeljkovic made 13 saves in relief.

David Pastrnak recorded a goal and an assist to reach the 500-point mark for his NHL career to lift Boston to a win over visiting New York.

Pastrnak had missed the previous eight games due to injury. Taylor Hall and Trent Frederic also scored goals for the Bruins, who have won three of four following a Thursday loss in Pittsburgh and snapped New York’s four-game win streak.