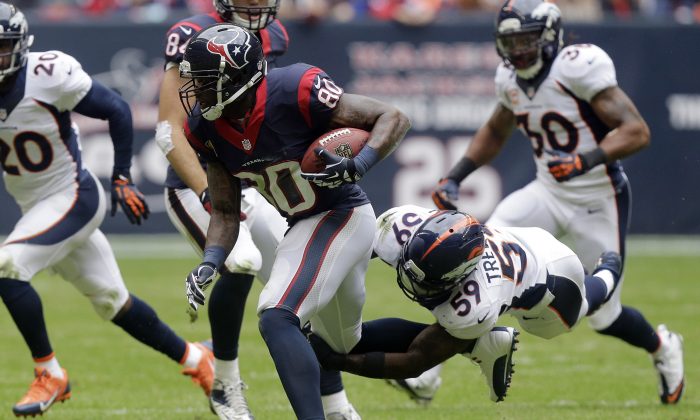 Houston Texans' Andre Johnson (80) tries to evade the tackle of Denver Broncos' Danny Trevathan (59) after he made a catch during the second quarter of an NFL football game on Sunday, Dec. 22, 2013, in Houston. (AP Photo/Patric Schneider)
NFL

The Houston Chronicle reported that the Texans still want Johnson on board.

“The Andre Johnson controversy will be resolved one of two ways: He will report to the Texans under the terms of his contract, or he will sit out,” Chronicle writer John McClain wrote. “Johnson, one of the best receivers in NFL history, will not be traded for several reasons. The Texans want him to finish his career in Houston. They know they are a better team with him. And they don’t want to set a precedent for similar situations that might develop in the future.”

The other rumor stipulates that Gordon, who was suspended for one season over drug problems, won’t be let go by the Browns after his stellar season last year.

“Per a source with knowledge of the dynamics of the situation, it’s not likely that the Browns would cut Gordon, but it remains possible. The source said that it would not be a surprise if the Browns decide to part ways with Gordon before training camp,” writes Pro Football Talk’s Mike Florio.

A few players with the Browns said Gordon should stay and not be cut.

Leary was arrested in suburban Dallas in September 2012 after failing a field sobriety test. According to the arrest warrant affidavit, he was pulled over for multiple traffic violations and on suspicion of driving while intoxicated.

A message seeking comment was left with his attorney Monday.

Leary was a Memphis University guard before the Cowboys signed him as a free agent in 2012. He has had a chronic knee problem.