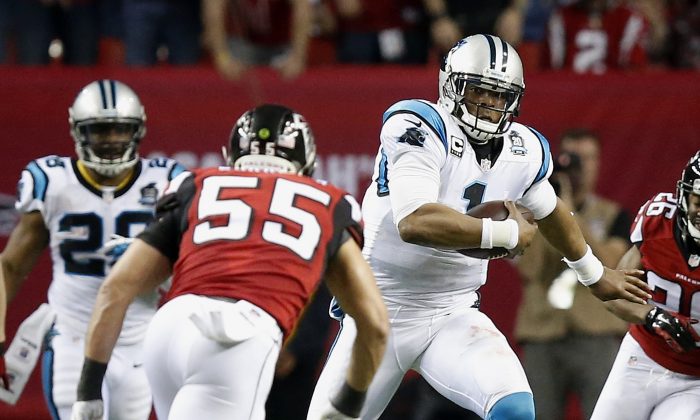 Steelers and Ravens and the Cardinals and Panthers play on Saturday. Here's some of the scores. Carolina Panthers quarterback Cam Newton (1) runs out of the pocket as Atlanta Falcons inside linebacker Paul Worrilow (55) looks on during the first half of an NFL football game, Sunday, Dec. 28, 2014, in Atlanta. (AP Photo/Brynn Anderson)
NFL

Aaron Rodgers held out of practice for Packers

GREEN BAY, Wis. (AP) — The Green Bay Packers got back to work on Friday without star quarterback Aaron Rodgers.

Even though he wasn’t there, teammates still began getting ready for their playoff opener.

“We all have work to do ourselves, and we have to go out to practice, and we’ve got to make sure that we’re crossing our T’s and dotting our I’s so that if and when he does come back we won’t miss a beat,” fullback John Kuhn said.

Rodgers, selected to the All-Pro team on Friday, was held out of practice as he recovers from a calf injury.

“It’s going all right,” Rodgers said after practice. “The calf is slowly progressing. I wasn’t out there today, but we’re right where we need to be in getting ready to hopefully get on the field next week.”

The Packers practiced after coach Mike McCarthy gave the players most of the week off with having a bye in the first round of the playoffs.

Rodgers injured his left calf late in the first half of Green Bay’s final regular-season game last Sunday, then returned to the game midway through the third quarter to lead the Packers to a 30-20 win over the Detroit Lions.

The victory earned Green Bay a fourth straight NFC North title and the No. 2 playoff seed in the NFC.

“Aaron’s doing well,” McCarthy said. “He’s been in treatment during the practice period, will do the same tomorrow, and I really don’t see him getting on the practice field till Thursday, probably at the earliest.”

As the Packers await their next opponent, they have another practice Saturday and then will shift to a normal week of game preparations starting Monday.

Going by McCarthy’s timetable, Rodgers would miss Green Bay’s first of three practice days next week on Wednesday. That wouldn’t give Rodgers much on-field work before the Packers’ division round game Jan. 11 at Lambeau Field.

At least a few players echoed the sentiment after veteran backups Matt Flynn and Scott Tolzien took the snaps at quarterback Friday.

“I think he’s good enough to do without (the practice time),” rookie center Corey Linsley said about Rodgers. “We’re going to prepare regardless for the same opponent, so I don’t think it should hamper us too much.”

Rodgers is confident his extended absence in practice won’t disrupt the continuity of Green Bay’s potent offense. The Packers scored a league-high 486 points in the regular season, second highest in team history.

“The rhythm is established. The play style is established,” Rodgers said. “It’s just about working on checks and kind of going through the plan. That’s why you need to practice.”

NOTES: WR Jordy Nelson, an All-Pro second-team selection, also missed practice Friday for what McCarthy said was a personal matter. McCarthy said Nelson will rejoin the team this weekend. Also not practicing were LB Sam Barrington and rookie CB Demetri Goodson because of illness. CB Davon House returned to practice after being out the last three games with a shoulder injury. . Rodgers and Kuhn were Green Bay’s first-team honorees in the All-Pro voting. “Since I was a kid, I’ve been looking at people who have been All-Pro and saying, ‘Wow, man, they’re really good. They’re the best at their position.’ To have that side by side with my name, it truly is a blessing,” said Kuhn, a nine-year pro who was a second-team choice in 2011. LG Josh Sitton repeated as a second-team selection. . The Packers promoted Eliot Wolf, son of retired general manager Ron Wolf, to director of player personnel. The younger Wolf has worked 11 years for the team and previously was its director of pro personnel.