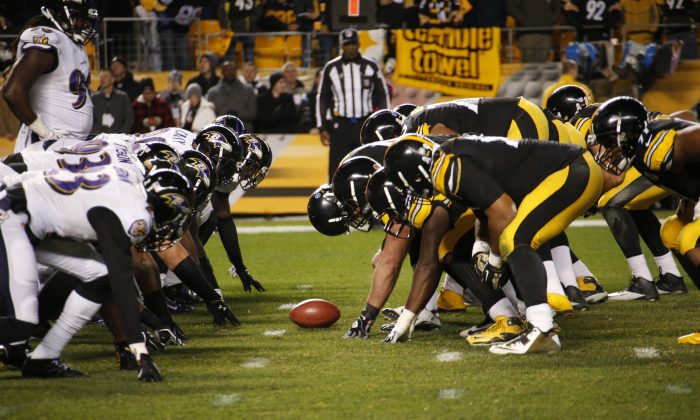 The Pittsburgh Steelers, right, line up against the Baltimore Ravens for a field goal attempt during the second half of an NFL football game, Sunday, Nov. 2, 2014, in Pittsburgh. (AP Photo/Gene Puskar)
NFL

The NFL playoffs start on Saturday with two games–the Arizona Cardinals against the Carolina Panthers, and the Baltimore Ravens against the Pittsburgh Steelers.

The first game, which will be broadcast on ESPN, will start at 4:35 p.m. EST. The Panthers are playing at home.

The second game, which will be broadcast on NBC, will start at 8:15 p.m. EST. The Steelers are playing at home.

The other two Wild Card games will be on Sunday.

The Cincinnati Bengals play at the Indianapolis Colts. The game kicks off at 1:05 p.m. EST and will be broadcast on CBS.

The Detroit Lions play at the Dallas Cowboys. The game kicks off at 4:40 p.m. EST and will be broadcast on FOX.

The NFL playoffs feature a mix-up in the second round, making it more uncertain who the winners will play.

In the AFC, the Steelers are the 3rd seed, the Colts are the 4th seed, the Bengals are the 5th seed, and the Ravens are the 6th seed. The lowest winning seed from the Wild Card round will face the New England Patriots, which got the 1st seed, next weekend. The highest winning seed will play the Denver Broncos, the 2nd seed.

While quarterbacks and other big-name, high-priced players get most of the attention, unlikely heroes often emerge to help their teams win in the NFL playoffs.

Three of the past four Super Bowl winners played in the wild-card round and each team got help from a surprise performer during its championship run.

Packers rookie James Starks had 123 yards rushing in Green Bay’s 21-16 win over Philadelphia on Jan. 9, 2011 after running for just 101 yards the entire season.

Giants No. 3 receiver Mario Manningham caught touchdown passes in each of New York’s first three playoffs wins in January 2012, nearly equaling his total of four TDs in the regular season.

Ravens cornerback Corey Graham matched his season total with two interceptions in one game against Peyton Manning, including a pick in overtime to set up the winning field goal in Baltimore’s 38-35 win at Denver on Jan. 12, 2013.

One of the top defensive performances came from unknown safety Vernon Perry in a playoff win. Perry intercepted four of Dan Fouts’ passes and blocked a field goal in Houston’s 17-14 victory over San Diego on Dec. 29, 1979.

Here are potential unsung heroes for each team this wild-card weekend:

CARDINALS: Outside linebacker Alex Okafor led the Cardinals with eight sacks and could be the key to pressuring Cam Newton and limiting his scrambling. Mobile quarterbacks Russell Wilson and Colin Kaepernick hurt theCardinals recently, so they have to keep Newton in check.

PANTHERS: WR Philly Brown has turned into Carolina’s deep threat and has been used on running plays late in the season. While Kelvin Benjamin will likely go against Patrick Peterson, Brown’s speed and playmaking skills could make the difference.

RAVENS: Cornerback Lardarius Webb has a difficult assignment covering Steelers All-Pro Antonio Brown in a matchup that could determine which team advances. Brown had an excellent season, but Webb isn’t backing down.

STEELERS: RB Josh Harris had nine carries this season, but the rookie is being asked to replace the injured Le’Veon Bell. Fellow rookie Dri Archer along with newly acquired Ben Tate also are in the mix, but Harris will keep getting the ball if he’s productive.

BENGALS: TE Jermaine Gresham averaged a career-low 7.4 yards per catch on 62 receptions while Pro Bowl receiver A.J. Green and Mohamed Sanu make the big plays for Cincinnati’s offense. Andy Dalton likes dumping the ball off, so Gresham could be quite active.

LIONS: S James Ihedigbo had a career-best four interceptions in his first season with the Lions. He is coming off being benched in the second half in last week’s loss at Green Bay, so he’ll have even more motivation to make plays. Ihedigbo also knows what it takes to win in the playoffs. He played for the Ravens two years ago.

COWBOYS: WR Cole Beasley is easily overlooked on an offense that includes Dez Bryant, DeMarco Murray and Jason Witten. But Beasley has a knack for making a tough catch and slipping through the defense for a key first down.