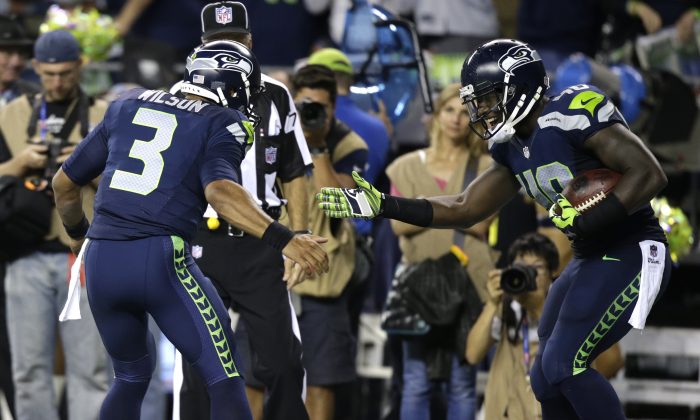 NFL Power Rankings 2014, Standings for Week 1: Seahawks Are Still No. 1

The first week of the NFL season hasn’t shown a whole lot, but it’s clear that there’s some continuity between the 2013-2014 season and this one: the Seahawks are No. 1 and the Broncos are No.2 . By the third week, there should be a much clearer picture. Here’s ESPN’s power rankings and Bleacher Report’s for more reference.

AP analysis: After finishing training camp with no major setbacks, the defending Super Bowl champions stayed in first place in the latest power rankings from the Associated Press. The Denver Broncos had one vote from the 12-person panel in the Pro32 poll released Tuesday. The Seahawks will have their status tested right away, with the NFL opener Thursday against Green Bay. The Packers were fourth, one spot behind the New England Patriots. San Francisco saw the most notable slip, from one first-place vote in the preseason poll six weeks ago to sixth. The 49ers offense was sluggish in exhibition action, and a nine-game suspension of star outside linebacker Aldon Smith became official.

2. Denver Broncos (1-0) – With Peyton Manning at the helm, there’s really no reason to drop this team down any further. But Denver almost squandered a 24-point lead. The secondary, anchored by Rahim Moore, is looking quite a bit better. One also has to be pleased with rookie Bradley Roby’s game–especially when he made the game-deciding play to break up Andrew Luck’s pass to Reggie Wayne.

3. San Francisco 49ers (1-0) – There’s been some offseason rumors and grumblings, but one can expect Jim Harbaugh to have his well-prepared. Colin Kaepernick and the San Francisco 49ers can put a tumultuous offseason behind them. They have a rusty  Tony Romo to thank for making the opener a little easier. Kaepernick threw two touchdown passes to Vernon Davis, one after the first of three interceptions from Romo, and the 49ers cruised to a 28-17 win over the sloppy Cowboys on Sunday.

4. Cincinnati Bengals (1-0) – The Bengals have picked up where they left off, stifling the Ravens’ offense until the fourth quarter.  “Just taking that next step to being a great team. I think these games right here prepare us for going into the postseason. When we’re not scoring every play, when it comes down to making that play, I think that game will help us,” said Bengals WR AJ Green after the win.

5. Green Bay Packers (0-1) – Losing against the best team in football at home isn’t anything to worry about, but the Packers defense still looks suspect. Having Aaron Rodgers helps shore up a lot of deficiencies, though.

6. Atlanta Falcons (1-0) – Massive confidence booster after last season’s dismal performance. This may have been Matt Ryan’s best game ever, as he threw for 448 yards and 3 TDs.

7. New England Patriots (0-1) – Is this the beginning of the end for Tom Brady and New England’s dynasty? Probably not, but the Patriots were shut out in the second half.  Even with Rob Gronkowski healthy, offensive line looked totally out of sorts, giving Brady little time to work with.

8. New Orleans Saints (0-1) The Saints have continued their losing ways when playing away from New Orleans.

11.  Houston Texans (1-0) – This might be a bit of a stretch, but it looks like Houston’s defense is back. This team just needs to protect the football better and JaDeveon Clowney is out for 4-6 weeks with a torn meniscus.

13. Indianapolis Colts (1-0) Ugly start playing the Broncos in Denver, but the Colts should rebound.

14. Philadelphia Eagles (1-0) – A rough first half was eclipsed by 27 unanswered points. However, it was against the Jaguars, so there’s that.

17. San Diego Chargers (0-1) – Outside of the Broncos, the AFC West looks wide open for the Chargers.

19. Detroit Lions (1-0) – Smashing the Giants is a good start. But like last year, too many penalties.

20. Cleveland Browns (0-1) – It’s hard to get a good grasp on the Browns thus far. They laid a goose egg in the first half but eviscerated the Steelers D to nearly come from behind in the second half.

21. Baltimore Ravens (0-1) -Ugly first day for Flacco. And no Ray Rice will compound this team’s offensive woes even more.

25. Tampa Bay Buccaneers (0-1) – The Bucs are supposed to be a decent running team but couldn’t muster up much in that department.

26. NY Giants (0-1)  – There were a few glimmering moments in the first half but the Giants look like they did last year.

27. Jacksonville Jaguars (0-1) – For a half, the Jaguars looked like they may have finally turned the page but then reverted back to normal.

28. Dallas Cowboys (0-1) – Here’s a line from an ESPN article that basically sums up the 49ers-Cowboys game: “An unofficial estimate: Almost half the crowd of 91,174 wore Niners red. That suggestion caused more steam to come out of the Cowboys owner/general manager’s ears than any of Tony Romo’s three poor-decision interceptions. “

30. Washington Redskins (0-1) -It feels all so similar: two fumbles in the Red Zone against the Texans.

31. Oakland Raiders (0-1) – This wasn’t a horrible game by any stretch, but the Raiders have some serious problems on defense that need to be shored up. MJD’s first day wasn’t impressive, but he did kick his own fumble back to Derek Carr. And speaking of Carr, he had a pretty rough debut, getting hurried and sacked by the smothering Jets’ defense.

32.  St. Louis Rams (0-1) – It’s really not looking great for the Rams. Backup QB Shaun Hill was taken out for 3rd-stringer Austin Davis, and DE Chris Long was sidelined with a left ankle injury.