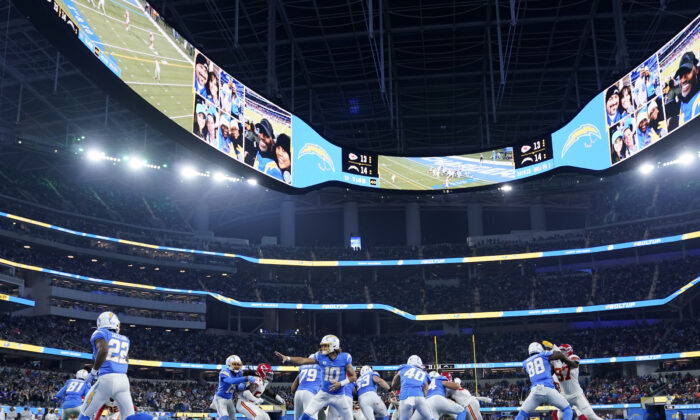 The NFL loosened its COVID-19 protocols over the weekend as the league was forced to postpone several games due to a rise in cases, according to memos that were distributed to teams on Saturday.

The NFL and NFL Player’s Association (NFLPA) said the league would partake in a “more targeted testing plan” for COVID-19, the illness caused by the CCP (Chinese Communist Party) virus.

“The NFL and NFLPA have been engaged with our medical advisors to address the emergence of the new Omicron variant and how to stop the spread to ensure we keep everyone safe and complete the remainder of the season responsibly,” said the NFL and NFLPA a joint statement.

“The intensive protocols implemented last week and the rescheduling of three games were designed to stop the transmission of the virus and play this week’s games safely,” according to the statement. “After this weekend’s games, we have agreed to put into place a new set of protocols, which will include a more targeted testing plan, more flexibility for players to attend meetings virtually and also a high-risk player opt-out for the remainder of the season.”

Under the league’s original COVID-19 rules, vaccinated personnel and players had to be tested for the virus every week. The new rule announced this weekend eliminates the requirement, which allows players and staff to be screened for COVID-19 symptoms and be tested less frequently.

Vaccinated players who show symptoms of the CCP virus will be isolated and tested immediately. Those who don’t show symptoms will be subject to the NFL’s “targeted testing,” according to the memo.

For unvaccinated players, there is no change in the NFL’s protocol. It means they will still have to be tested for COVID-19 every day.

“In many respects, Omicron appears to be a very different illness from the one that we first confronted in the spring of 2020,” NFL Commissioner Roger Goodell said in the memo.

The move appears to be designed to keep players from being sidelined while not experiencing any COVID-19 symptoms. Last week, the league announced that three games were postponed relating to COVID-19 outbreaks among players and staff in the Los Angeles Rams, Cleveland Browns, and Washington Football Team.

“We can’t apply 2020 solutions to the 2021 problems that we’re having,” NFL Chief Medical Officer Dr. Allen Sills said several days ago. “We’re often at the tip of the spear in seeing some of these changes before they show up in other elements of society because we do have so many tools at our disposal.”

“I think we will get to a point, probably this week, that we’ll test only if symptomatic, that’s if you’ve been vaccinated,” Jones told 105.3 The Fan over the weekend. “That’s a good thing. Test when you’re symptomatic and that’s it.”