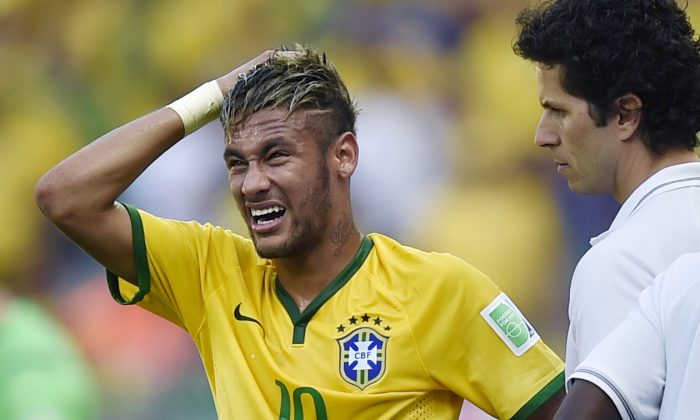 Brazil's Neymar reacts during the World Cup round of 16 soccer match between Brazil and Chile at the Mineirao Stadium in Belo Horizonte, Brazil, Saturday, June 28, 2014. (AP Photo/Martin Meissner)
Gaming

How did Neymar fare for Barcelona and what is his FIFA 14 potential and rating?

The 22-year-old Brazilian was ruled out of World Cup 2014 in the quarter final stage after sustaining an unfortunate back injury.

Colombian defender Juan Camilo Zúñiga dangerously and cynically brought down Neymar with a flying tackle to the back, which left Neymar with a fractured vertebra, just before the Brazil-Colombia quarter final match ended.

In all, Neymar scored four goals (two against Croatia and two against Cameroon) and notched one assist (against Colombia) for Brazil at the World Cup.

Neymar joined Barcelona in the 2013/2014 season, and made 28 appearances, scored 13 goals, and provided 11 assists in all competitions, according to WhoScored.com.

In FIFA 14, EA Sports’ popular soccer simulator, Neymar has a base rating of 84 in Career mode, and a growth potential of 7, according to Futhead. In Ultimate Team, the FC Barcelona version also has a 84 rating; Team of the Week 85; World Cup 89; and World Cup Team of the Month 88.

Willian took Neymar’s position when Brazil’s reserves played against a local under-20 squad at its training camp outside Rio de Janeiro.

The regular starters stayed in the gym and didn’t practice on the field, but all players touted as possible Neymar replacements trained normally. Willian was used in the middle, in front of Brazil’s defensive midfielders, the same way Neymar played before being ruled out of the tournament because of a back injury.

The other options for Scolari include Ramires, Bernard and Hernanes.

Brazil won the training match 3-0 with goals by Bernard, Dante and Ramires. It was Brazil’s second-to-last practice session before traveling to Belo Horizonte for Tuesday’s match at the Mineirao Stadium.

“You can’t compare Neymar to any other player, he has a lot of quality,” Willian said. “I have a different style. He is more of a striker, scores more goals, while my strong suit is to set up my teammates.”

The Chelsea player left practice near the end of Saturday’s session because of a hit on the back but said the injury was not a problem even though it “was still bothering” him a bit.

Bernard said he is prepared to play but acknowledged it won’t be easy to replace the team’s biggest star.

“It’s a difficult situation,” he said. “No player would want to have this opportunity to play because of an injury to someone so important to us on and off the field. But it happened, and we have to understand that we can get through this.”

In addition to missing Neymar, Brazil will not be able to count on captain and central defender Thiago Silva because of a yellow card suspension. Dante, who plays in Germany for Bayern Munich, is his likely replacement. Fellow defender David Luiz is the probable captain on Tuesday.

The Brazilian football confederation is trying to overturn Silva’s suspension and FIFA said it was analyzing the request, but it remained unlikely Brazil would get its way.

Neymar had missed only six of Brazil’s 60 matches played after the 2010 World Cup. In the 54 matches he played with the national team, Brazil won 36, drew 12 and lost six. He had scored half of Brazil’s eight goals going into the World Cup quarterfinals.

The Barcelona star was kneed in the back in the 86th minute of the match against Colombia, sustaining a fractured vertebra that will sideline him for about 45 days.