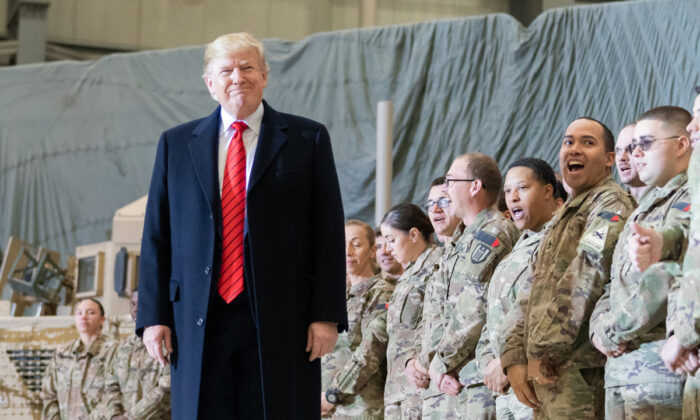 Jessica Kwong, a Newsweek reporter who wrote an inaccurate article about President Donald Trump’s Thanksgiving Day plans, has been fired by the media outlet, according to the Washington Examiner.

Kwong wrote an article with the headline “How is Trump spending Thanksgiving? Tweeting, golfing and more” alleging that Trump only planned on tweeting and golfing over the holiday.

The article was published before reports of Trump’s surprise visit to American troops in Afghanistan on Thanksgiving emerged.

“Newsweek investigated the failures that led to the publication of the inaccurate report that President Trump spent Thanksgiving tweeting and golfing rather than visiting troops in Afghanistan,” Newsweek told the Washington Examiner. “The story has been corrected, and the journalist responsible has been terminated. We will continue to review our processes and, if required, take further action.”

I thought Newsweek was out of business? https://t.co/3ro4eSJloo

According to the pool reports, Trump spent several hours at Trump International Gold Club in West Palm Beach, Florida on Wednesday, the day before Thanksgiving.

Trump left on Wednesday night before boarding a military plane at an undisclosed airport before going to Joint Base Andrews. He then transferred to another Air Force One plane before flying to Bagram Airfield north of Kabul.

Word of his visit to Afghanistan came at around 2 p.m. ET on Thursday when journalists traveling with the president were authorized to provide reports about the visit.

The White House said an identical Air Force One plane stayed at the airport in Palm Beach, Florida, while the president was in Afghanistan.

Speaking to troops at the base around 10:45 p.m. local time, Trump said, “There’s nowhere I’d rather celebrate this Thanksgiving than right here with the toughest, strongest, best, and bravest warriors on the face of the Earth.”

He added later: “We flew 8,331 miles to be here tonight for one simple reason: to tell you, in person, that this Thanksgiving is a special Thanksgiving. We’re doing so well. Our country is the strongest, economically, it’s ever been. We have never done so well. We have the greatest economy anywhere in the world. So it’s nice to know that you’re fighting for something that is doing well, as opposed to something that was not doing well just a number of years ago.”

Newsweek updated the previous article with a new headline that reads “How is Trump spending Thanksgiving? Tweeting, golfing—and Surprising U.S. Troops in Afghanistan” after the presidents trip was announced to the public.

The article also now includes details about Trump’s visit to U.S. troops in Afghanistan and an editor’s note at the bottom of the article reads: “This story has been substantially updated and edited at 6:17 pm EST to reflect the president’s surprise trip to Afghanistan. Additional reporting by James Crowley.”

It wasn’t an “honest mistake” you tried to dunk on Trump and ended up dunking on yourself because you couldn’t resist. Notice how there’s never been a story that broke in Trump’s favor & had to be corrected the other way? These aren’t mistakes, they are a very consistent pattern. https://t.co/HmyrHrOjqB

Kwong later deleted her tweet about the article and claimed it was “an honest mistake.”

“Deleting this tweet because it was written before knowing about the president’s surprise visit to Afghanistan—an honest mistake,” she wrote on Twitter.

Trump and his eldest son Donald Trump Jr. reacted to the article on Twitter, with Trump Jr. writing, “It wasn’t an ‘honest mistake’ you tried to dunk on Trump and ended up dunking on yourself because you couldn’t resist. Notice how there’s never been a story that broke in Trump’s favor & had to be corrected the other way?”

“These aren’t mistakes, they are a very consistent pattern,” he wrote.