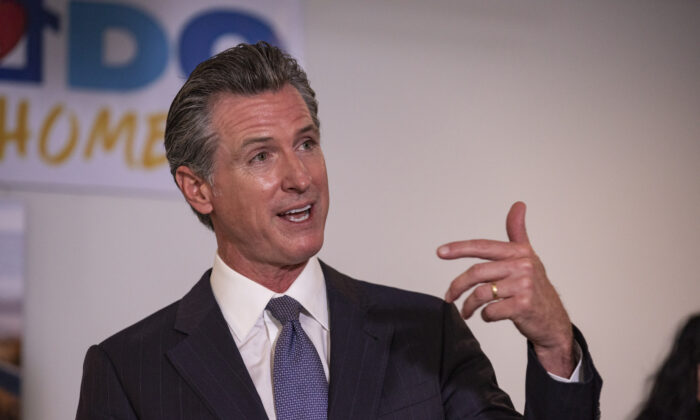 Newsom Vows to Make California a Sanctuary State for Abortions

LOS ANGELES—Gov. Gavin Newsom vowed May 4 to make California a safe haven for women from other states seeking abortions, following a potential overturn of the federal abortion law under Roe v. Wade.

“This never [has] happened in our lifetime,” Newsom said during a press conference at a Planned Parenthood office in Los Angeles. “We’re taking away rights that have been affirmed over and over again and well established … wake up America.”

Newsom met alongside Planned Parenthood advocates holding signs with the words “ban off our bodies,” following the leak of a draft decision written by U.S. Supreme Court Justice Samuel Alito, which is being investigated, of the possible overturning of Roe v. Wade—the 1973 Supreme Court decision that legalized abortion nationwide.

The governor became emotional while warning residents that the government was coming after them and their right to privacy, while highlighting the “extremist” Republican Party that, he said, is denying abortions to those in rape and incest pregnancy dilemmas.

“I think folks should be really pissed off at this moment,” Newsom said.

“What they’re doing is really over the top. Paying for the abortions for women from all across the country? That’s just insane,” Melendez told The Epoch Times in a previous interview.

If Roe v. Wade is overturned, the ruling wouldn’t ban abortion nationwide, but instead, let each state legislature decide.

Since the leak on Monday, California has sought to propose an amendment in the state constitution to ensure the right to an abortion without a doubt.

Newsom said the proposed amendment will be presented to voters in the November general election.

“California is proposing an amendment to enshrine the right to choose in our state constitution so that there is no doubt as to the right to abortion in this state,” the governor, Atkins, and Rendon said in a joint statement.

“We know we can’t trust the Supreme Court to protect reproductive rights, so California will build a firewall around this right in our state constitution. Women will remain protected here.”