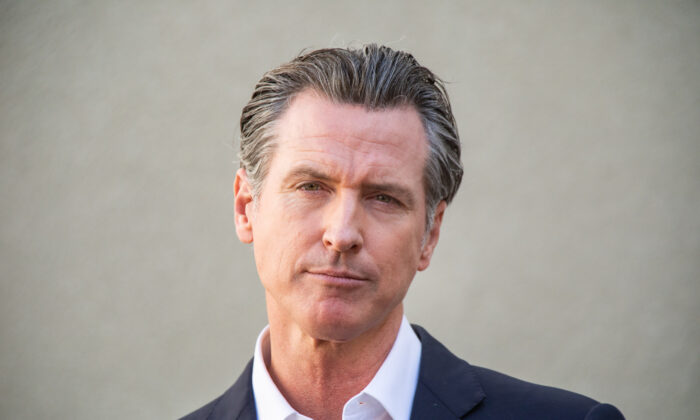 California Gov. Gavin Newsom caught the nation by surprise on June 16 when he made his debut on the Truth Social social media platform and called out officials in red states over high murder rates.

Newsom’s first “truth”—truths are to Truth Social as tweets are to Twitter—is a short video of himself talking about murder rates; while essentially true, it doesn’t tell the whole story about crime in deep-blue, Democratic-run cities.

The Truth Social platform was started by former President Donald Trump after he was unceremoniously banned from Twitter near the end of his presidential term in January 2021.

Going to be on there calling out Republican lies. This could get …interesting.

Newsom announced on Twitter that he joined Truth Social to “call out Republican lies.”

“I just joined Trump’s Truth Social. Going to be on there calling out Republican lies. This could get … interesting,” he wrote on Twitter.

“Hey everybody, it’s Gov. Gavin Newsom. And I know we’re all on this platform in search for the truth,” Newsom says in the video. “But, the truth is I’ve not been able to find a simple explanation for the fact that we have a red state murder problem. Eight of the top 10 states with the highest murder rates happen to be red states.

“So, the question is simple. What are the laws and policies in those states that are leading to such carnage?”

“Truth Social exists so that people of all political perspectives can express their views without being discriminated against,” Nunes told The Epoch Times on June 17. “We’re glad Gov. Newsom is embracing the Truth Social ethos and engaging in robust debate on our rapidly growing free speech platform.”

While Newsom doesn’t mention guns in his “truth,” he is a strong advocate of gun control.

Mark Oliva, spokesman for the National Shooting Sports Foundation, a trade association for the firearms industry, told The Epoch Times that Newsom’s “truth” may be more of a half-truth.

“He wants to selectively use snippets of the truth to bolster his argument without providing the full picture … that these blue cities continue to have failing policies because of progressive politics that refuse to hold criminals accountable for their crimes,” Oliva said. “If he doesn’t want to address that, then he’s not being truthful with California citizens.”

Newsom is essentially correct that states with the highest murder rates per capita tend to lean Republican, but most of the total murders occur in Democratic-leaning, urban areas, according to FBI statistics.

Blue cities such as Chicago, Detroit, St. Louis, Baltimore, Oakland, and Los Angeles are known for high numbers of murders, regardless of per capita rates. Louisiana’s blue cities Baton Rouge and New Orleans have some of the highest murder rates in the nation, according to FBI statistics.

California recorded 2,368 deaths from homicide in 2020, the highest of any state, according to the Centers for Disease Control and Prevention.

“California voters just recalled the district attorney in Gov. Newsom’s hometown over his soft-on-crime policies,” he said. “The governor has also presided over a mass exodus of citizens from his state over his administration’s failing policies. Those Californians are relocating to red states, where rights are respected and criminals are held accountable for their crimes.

“The governor would be better served addressing the needs of his citizens than playing games on social media.”

“Gavin Newsom’s desperate publicity stunt attempting to boost both his ego and his laughable presidential ambitions is embarrassing. Here’s the truth: Newsom should spend less time lecturing red states that have stronger economies and lower gas prices because of commonsense Republican policies, and more time worrying about the problems he and California Democrats have created at home,” she said.

“If he wants to talk about gun policies, we’d welcome his response to the news that two El Monte police officers were murdered by a criminal potentially released from prison early because of Democrat soft-on-crime policies,” she said.

State Sen. Melissa Melendez (R-Lake Elsinore) said in a text to The Epoch Times, “No matter how many social media platforms Gavin Newsom goes on, he will never be president.”