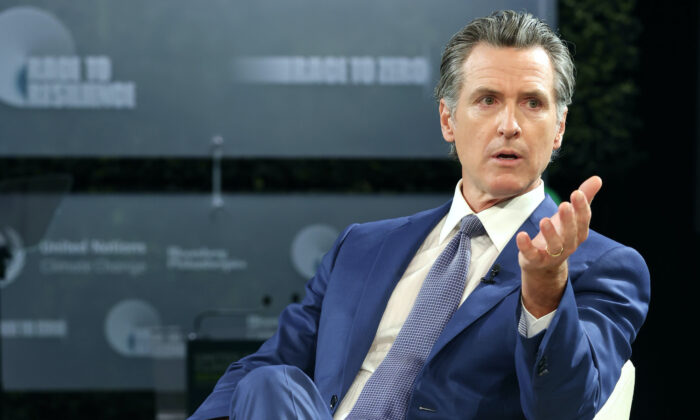 California Gov. Gavin Newsom on Tuesday signed into law a package of abortion-related bills, some of which immunize women and doctors from criminal and civil liability for what critics have called infanticide.

While many Republican-led states move to ban abortion, Democrat-led California “continues to lead the nation’s fight” to decriminalize aspects of abortion and create more privacy around it, according to Newsom’s office.

“An alarming number of states continue to outlaw abortion and criminalize women, and it’s more important than ever to fight like hell for those who need these essential services,” Newsom said in a statement.

“We’re doing everything we can to protect people from any retaliation for accessing abortion care while also making it more affordable to get contraceptives.”

Among the package of laws signed Tuesday is AB 2223, which Newsom’s office said will “ensure that pregnancy loss is not criminalized.”

Newsom’s office said the law will “prohibit a person from being criminally or civilly liable for miscarriage, stillbirth, abortion, or perinatal death due to causes that occurred in utero.”

A lawyer from the American Center for Law and Justice has said the inclusion of “perinatal death,” which extends to 28 days after birth, will mean the law immunizes women and doctors from liability if an infant isn’t given medical care after being born alive during a failed abortion so long as the doctor notes that it was “due to” causes “that occurred in utero.”

Christian pastor Jack Hibbs described the state’s legislature as Newsom’s “huddle from hell,” and said the package of laws allows “the most cruel and extreme form of abortion—late term.”

Newsom’s office said that among the California legislature’s goals was to create more “privacy” around abortion in the state.

The previously mentioned AB 2223 also creates privacy by prohibiting a county coroner from launching an investigation “related to or following known or suspected self-induced or criminal abortion.”

The bill states that after a coroner examines a fetus and finalizes their report, the findings can’t be used to “establish, bring, or support a criminal prosecution or civil cause of action seeking damages against any person who is immune from liability.”

“Through its courts and statutes and under its Constitution, California protects the right to reproductive privacy, and it is the intent of the Legislature to reaffirm these protections,” the bill states.

This would include scenarios where care is withheld or omitted from an infant, whether full-term, premature, or born alive but subsequently dies due to lack of care, according to the American Center for Law and Justice.

In such cases, a coroner might note it as an “unattended fetal death”—which under the new law couldn’t be investigated further because the mother and doctor would be immune to civil or criminal liability or penalty, no matter the coroner’s finding. The law also deletes the requirement for a coroner to handle such a death as a “death without medical attendance.”

“In other words, it could effectively legalize infanticide up to twenty-eight days after the baby is born (the perinatal period) ‘for any reason,’” wrote Jordan Sekulow, the executive director of the American Center for Law and Justice, in a blog post.

Some of the other new laws that achieve California’s privacy goals include the “Keeps Medical Records Private” act, introduced by Assemblymember Mia Bonta (D-Oakland).

This law “prohibits a health care provider from releasing medical information on an individual seeking abortion care in response to a subpoena or request from out-of-state.”

Assemblymember Rebecca Bauer-Kahan (D-Orinda) introduced AB 1242, called the “Prohibits Cooperation with Out-of-State Entities” act. This law is designed to block law enforcement and California corporations from cooperating with out-of-state entities regarding an abortion that happens in California. This measure seeks to protect a person from arrest for aiding in an abortion performed in California.

Some of the other bills in the package Newsom signed will expedite the licensing of abortion providers who move to California to set up shop, provide grants to service providers who give free abortions in low-income areas, and set up a fund to educate “disproportionately affected communities” about sexual health, including “abortion care.”

The package of bills will also provide training opportunities for nurses and midwives to learn the suction abortion technique, which is generally performed at up to 16 weeks.