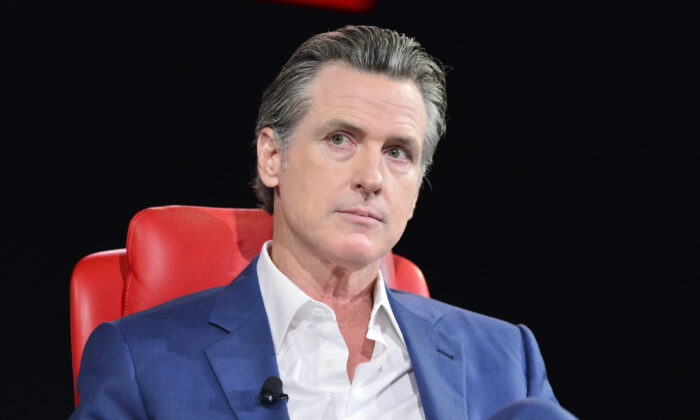 The executive director of a law firm trying to stop a California bill that he says will enable infanticide has criticized billboards paid for by the campaign of California Gov. Gavin Newsom which promote abortion with Bible quotes.

Newsom, a Democrat, announced on Sept. 16 that he had launched the billboards in Texas, Indiana, Mississippi, Oklahoma, and three more of what he called “the most restrictive anti-abortion states.”

The billboards encourage women to seek abortions in California, with some including a Bible verse from Mark 12:31, in which Jesus is quoted as saying: “Love your neighbor as yourself. There is no greater commandment than these.”

“To any woman seeking an abortion in these anti-freedom states: [California] will defend your right to make decisions about your own health,” Newsom wrote on Twitter alongside images of the designs of each billboard.

The move has been denounced by Jordan Sekulow, the executive director of the American Center for Law and Justice, a constitutional law firm urging Newsom not to sign an abortion bill, AB 2223, which has gone to his desk.

“Governor Newsom has taken it upon himself to be the ambassador of abortion in America, inviting others to come to California to have abortions,” Sekulow wrote in a blog post.

“But while it’s obnoxious to post billboards in other states, he goes a step further into pure evil,” he added. “The most depraved part is that the very same billboards quote and twist the words of Jesus Christ in order to promote the killing of unborn children in abortion.”

Sekulow said he finds it “hard to imagine” that Newsom loves God when he “advocates for legally killing babies after they’re born.”

“And it certainly isn’t loving your neighbor. These babies are our neighbor. Yet Newsom is pushing hideous new extreme abortion bills,” Sekulow said, referring to an abortion bill awaiting the Democratic governor’s signature.

In an Aug. 31 letter (pdf) to Newsom, Sekulow said AB 2223 will, if signed, change California law “in a way that radically undermines protection for newborns,” and unless amended, “will allow certain forms of infanticide.”

Introduced by Assemblymember Buffy Wicks, the bill would delete from the existing law the requirement for a county coroner to hold inquests to investigate perinatal deaths “related to or following known or suspected self-induced or criminal abortion.”

Under the legislation, if a person withholds or omits care from an infant—which a coroner might note as an “unattended fetal death”—whether that infant is full-term, premature, or born alive but subsequently dies due to lack of care, the person would be immune to civil or criminal liability or penalty, no matter what the coroner finds.

The bill further states that it would “delete the requirement” for a coroner to handle “an unattended fetal death” as a “death without medical attendance.”

Under the legislation, immunity from criminal or civil liability extends to any of the mother’s “actions or omissions with respect to their pregnancy or actual, potential, or alleged pregnancy outcome, including miscarriage, stillbirth, or abortion, or perinatal death due to causes that occurred in utero.”

The phrasing in the clause is particularly egregious for Sekulow because the scope of “pregnancy outcome” would include if a newborn died for any reason during the “perinatal” period, which extends 28 days after birth, including if a newborn is left to die after a failed abortion.

“In other words, it could effectively legalize infanticide up to twenty-eight days after the baby is born (the perinatal period) ‘for any reason,'” Sekulow wrote.

Sekulow said the “abhorrent language” has remained unchanged in the bill throughout the amendment process. He added that there had been a “complete refusal” on the part of California lawmakers “to remove the term ‘perinatal'” from the bill.

“It is now abundantly clear that this refusal is intentional and not due to a misunderstanding of the term,” he said.

After American Center for Law and Justice conducted legal analysis of the bill, Sekulow noted another part of the phrasing in that clause of the bill for its ambiguity: “occurred in utero.”

Sekulow said ambiguity in the bill’s language left it open to interpretation which allows doctors to claim an infant’s death was “due to” something that happened in utero, or before birth, and that the law would “effectively bar” any investigation to verify those claims.

“People would be protected regardless of whether the death of the child was caused by their actions or their omission with regard to their pregnancy and their care of the infant born alive,” he said.

The lawyer accused the California legislature of “attempting to shield women,” and those who help them in a “self-performed” abortion, from having to provide medical attention to “babies born alive after botched abortions.”

“This law would, sub silento, overrule those protections, and would create a subclass of newborn human beings by taking away their right to not only medical care, but to life.”

Under the Californian bill, women wouldn’t need to visit a physician in person to access abortion pills nor get a pre-natal scan to determine the actual pregnancy stage.

In his letter to Newsom, Sekulow cited how, under similar laws in the UK, an East Yorkshire woman took an abortion pill known as mifepristone at 30 weeks pregnant believing she was 12 weeks pregnant. The child was born in a hospital toilet and despite medical attention died four days later. An inquest into the incident heard the woman had not received proper pre-natal scans, The Daily Mail reported.

New Zealand in 2020 passed an abortion law with similarities to California’s AB 2223. It was described as the country’s “most liberal” abortion law, allowing abortions up to 20 weeks without consulting a doctor.

A right-leaning elected official attempted to insert an amendment into that legislation to make it a legal requirement to provide medical care to any infants born alive in a failed abortion. New Zealand’s left-leaning government voted 80–37 against it, including Prime Minister Jacinda Ardern.

The following year, an infant was left gasping for breath for two hours before dying after an unsuccessful late-term abortion at 21 weeks, according to Voice for Life, the country’s oldest pro-life organization, who reported the eye-witness account of a health care student who was reportedly left traumatized after witnessing it.

The Epoch Times has asked Newsom’s office for comment.