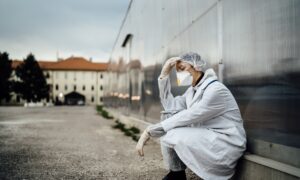 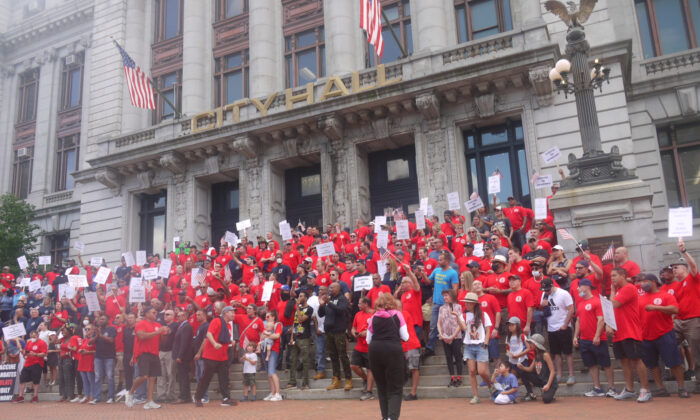 People participate in the rally outside the City Hall organized by firefighters and police unions to demand negotiations on the COVID-19 Vaccine Mandate in Newark, N.J., on Sept. 8, 2021. (Ella Kietlinska/The Epoch Times)
Local News

Firefighters and police unions in Newark, New Jersey, held a rally on Wednesday to demand that the city government negotiate with them on the change in their work conditions due to the COVID-19 vaccination mandate imposed by the mayor.

More than a hundred people demonstrated in Newark against the forced vaccination order by holding signs, shouting slogans, and marching outside around City Hall.

Mayor of Newark Ras Baraka issued an Executive Order in August requiring all municipal employees including police and firefighters to be fully vaccinated against COVID-19 or face termination, according to New Jersey News Network.

Employees who were not fully vaccinated were given 30 days to provide their proof of vaccination and also undergo weekly testing at their expense for 30 days.

The city allowed medical or religious exemptions from vaccination against the CCP (Chinese Communist Party) virus, commonly known as the novel coronavirus, which causes COVID-19 disease.

The city’s firefighters union was able to obtain from the state employment commission a restraining order, which temporarily prevents the city government from implementing the mandate, wrote Charles West, president of the Newark Firefighters Union, in a letter to union members.

The restraining order applies also to police officers. West called on all members of the firefighters union to stop providing vaccination information until the city negotiates with the union.

The city government opposed the temporary restraint motion but the commission upheld it, according to an interim decision by the New Jersey Public Employment Relations Commission (pdf).

According to New Jersey laws, a public employer is obligated to negotiate “with a majority representative” a proposal to modify working conditions before changing them, the decision stated.

“The threat of discipline, including termination, set forth in the Executive Order, resulting in potential loss of income and health insurance benefits, carries severe personal impact to both the employee and the employee’s dependents,” the decision said, “No monetary award at the conclusion of these matters would redress the harm that could occur before that time.”

“The harm to the City is relatively less harmful if the vaccine mandate awaits a finite period of negotiations on mandatory negotiable subjects.”

President of Fraternal Order of Police in Newark, James Stewart Jr. told The Epoch Times that the goal of the protest was to compel the city to negotiate with the union members the change in the terms and conditions of employment caused by the mandate.

The Mayor’s Executive Order requires employees to use their personal time for mandated vaccination and testing but the contract between the police union with the city stipulates that members should get paid for this, Stewart said.

“The city says if you can’t produce a negative test result, we’re sending you home on unpaid sick leave. Well, the members here today, the union members, we don’t have unpaid sick leave, we get paid for our sick time.”

”The people that organize this [event] today–we’ve all been vaccinated already. This[rally] doesn’t pertain to our issue about vaccine or no vaccine. This is about union members and the rights that they have,” Stewart said adding that he also had been vaccinated.

“Tomorrow, they could create another Executive Order and take away more rights and benefits that these union members enjoy right now. And that can’t stand,” he added.

Battalion Fire Chief at Newark Department of Public Safety Gerrell Elliott told The Epoch Times that the mayor’s order to force vaccination is like an act of someone who does not make mistakes.

To illustrate his point Elliott cited how after about 20 years, pharmaceutical companies admitted their mistakes related to pills causing opioid overdoses some of which resulted in deaths. Mistakes were made by the tobacco industry admitting after several decades that their products might cause cancer, he said.

First, people were told to get vaccinated, but now it turned out that they also need a booster, Elliott noted.

During the pandemic “I was on the frontline every day,” said Elliott who has been a firefighter with the Newark Fire Department for the last 20 years.

“I’m risking my life every day I go to work. I don’t need you to put more risk in my life” from inoculation, he said.

“European people just show up in hundreds of thousands,” Ostrowska said, “Nothing will change if we don’t stand up, if we don’t rise up. I grew up in Poland–communism [is] very, very well known to me. … We have to extend the answer; we have to say ‘no’ because communism is around the corner.”

Ostrowska, who owns a Pilates studio in New York City, told The Epoch Times that the requirement to show a vaccine passport in order to get into restaurants, gyms, concerts, museums, or big venues “is absolutely wrong” because that would segregate people.

“I make people stay in shape, I help their immune system by making them strong. We have to exercise in order to stay healthy, … to help our immune system,” said Ostrowska.

Now she is allowed to only let vaccinated people into her studio, Ostrowska explained. “So as a business owner, I cannot comply with this order.”

“Everybody has the right to bodily autonomy. I decide what goes into my body, not my governor, not my mayor.”

Mayor Baraka justified his vaccination mandate in an op-ed published by NJ.com in August.

Mayor Baraka: Our cops, firefighters must be vaccinated to protect the public | Opinion https://t.co/myOcKwQVrR

City employees “come in constant contact with the public, either in the office or in the field,” Baraka wrote in the op-ed. People who come to the city hall for various reasons “should be confident their public servants have been vaccinated and they will not leave city hall infected,” he said.

“The police and fire division personnel of our Public Safety Department are routinely in contact with members of the public in either emergency situations or while making routine rounds.”

Unions organizing members whose jobs are to protect the public have lost nine members to the disease, Baraka wrote.

The Epoch Times reached out to the City of Newark for comments.