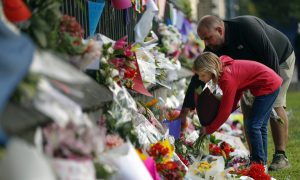 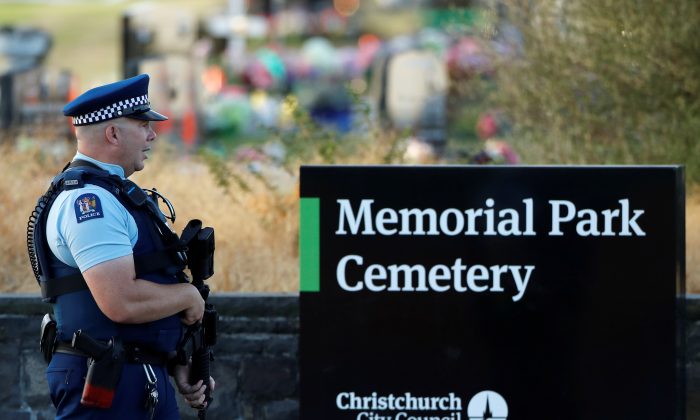 An armed policeman stands guard as the burial ceremony of the victims of the mosque attacks, at the Memorial Park Cemetery in Christchurch, New Zealand, on March 20, 2019. (Jorge Silva/Reuters)
Asia & Pacific

CHRISTCHURCH, New Zealand—A father and son who fled the civil war in Syria for “the safest country in the world” were buried before hundreds of mourners on March 20, at the first funerals for victims of shootings at two mosques.

The services for Khalid Mustafa, 44, and Hamza Mustafa, 15, came just days after a gunman systematically shot dead 50 worshippers at two mosques in Christchurch—a massacre that was broadcast live on Facebook.

Hamza’s high school principal described the late young man as compassionate and hardworking, and also an excellent horse rider who aspired to be a veterinarian.

Those present included Hamza’s younger brother, Zaed, 13, whose arm and leg was wounded during the attack. The boy tried to stand during the ceremony but had to sit back in his wheelchair, one mourner said.

“We tried to not shake his hand, and not touch his hand or his foot, but he refused, he wanted to shake everybody’s hand, he wanted to show everyone that he appreciated them. And that’s amazing,” said Jamil El-Biza, who traveled from Australia to attend the funeral.

The Mustafas had moved to New Zealand in 2018, after spending six years as refugees in Jordan. Mustafa’s wife, Salwa, told Radio New Zealand when the family asked about the land of the Kiwi they were assured “it’s the safest country in the world, the most wonderful country you can go … you will start a very wonderful life there.”

“But it wasn’t [afterall],” Salwa added.

Prime Minister Jacinda Ardern said the family should have been safe.

“I cannot tell you how gutting it is to know that a family came here for safety and for refuge,” Ardern said.

Families of those killed had been anxiously awaiting word on when they could bury their loved ones. Police Commissioner Mike Bush said police have now formally identified and released the remains of 21 of those killed.

The burials began soon after Ardern renewed her call for people to speak of the victims rather than the man who killed them.

Meanwhile, a man accused of sharing video footage of the March 15 massacre is being detained until his next court appearance in mid-April. New Zealand Police Commissioner Mike Bush believes police officers stopped the gunman on his way to a third attack.

About 30 people wounded in the attacks remain hospitalised as of the evening on March 19. About 10 of them are in critical condition, including a 4-year-old girl.

Australian-born Brenton Harrison Tarrant, 28, has been charged with murder and is next scheduled to appear in court on April 5. Police said they are certain Tarrant was the only gunman but are still investigating whether he had support from others.

New Zealand’s international spy agency, the Government Communications Security Bureau, confirmed it had not received any relevant information or intelligence before the shootings.

Philip Arps, 44, appeared in a Christchurch court on March 20 facing two charges of distributing the killer’s livestream video of the attack on the Al Noor mosque, the first mosque that was attacked, a violation of the country’s objectionable publications law. Each charge carries a maximum sentence of 14 years in prison.

Arps, heavily tattooed and dressed in a t-shirt and sweatpants, has not entered a plea. He remained expressionless during the hearing, his hands clasped behind his back.

Court documents accuse Arps of distributing the video on March 16, just one day after the massacre.

Bush said police believe they know where the gunman was going for a third attack when officers rammed his car off the road but will not say more because it is still an active investigation.

In a 74-page manifesto released before the attack, Tarrant said he was going to attack two mosques in Christchurch and then one in the town of Ashburton, if he made it that far.

Bush also revised his timeline, saying officers rammed the suspect 21 minutes after the first emergency call rather than 36 minutes. Bush said U.S. Federal Bureau of Investigation agents have travelled to New Zealand to help with the investigation.

Abizar Valibhai, of Christchurch, said the burials mark an important moment, adding there would be many waves of emotions to come for families of the victims.

Residents of this close-knit city have created makeshift memorials near the two targeted mosques and at the city botanical gardens, where a mountain of flowers has grown by the day.

Janna Ezat whose son, Hussein Al-Umari, was killed in the Al Noor mosque, visited the memorial at the gardens and was overwhelmed by the outpouring of love. She knelt amid the flowers and wept, grabbing at daisies and lilies as though she might find her boy in them.

She is comforted by reports that Hussein confronted the killer, charging at him after surviving the first spray of bullets.