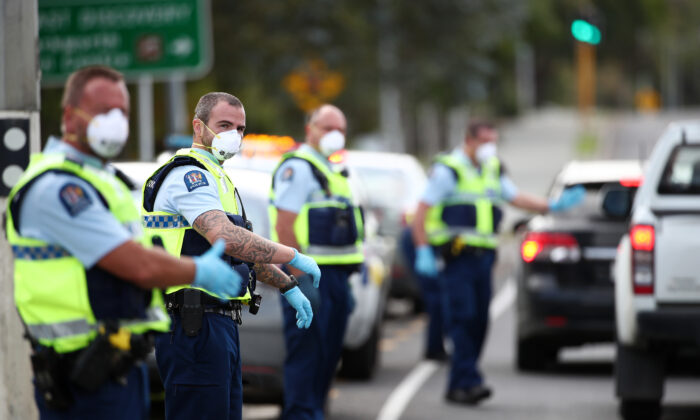 The New Zealand High Court has upheld a challenge to a vaccine mandate for Police and Defence Force staff, stating that it was not a “demonstrably justified” breach of the Bill of Rights.

Justice Francis Cooke was asked by a group of Police and Defence Force personnel to judicially review the vaccine mandate enacted under the COVID-19 Public Health Response Act in December.

The mandate required all Defence Force personnel and all Police constables, recruits, and authorized officers to receive two doses of the vaccine by March 1.

But on Jan. 6, three unvaccinated staff who did not wish to receive the shots sought a judicial review of the mandate. They were supported by affidavits from 37 of their colleagues in the same position.

The group claims that two rights of the New Zealand Bill of Rights Act 1990 had been limited by the mandate: the right to refuse a medical treatment and the right to manifest religious beliefs.

Part of the group’s religious objections to the mandate were concerns over the fact that “the Pfizer vaccine had at some point been tested on cells that had been derived from a human foetus.”

According to UCLA Health, COVID-19 vaccines do not contain aborted fetal cells but Johnson & Johnson did use fetal cell lines when developing and producing their vaccine, and Pfizer and Moderna used them to test their vaccines to ensure they work.

The group claimed that “requiring vaccination by such a vaccine was in conflict with the religious beliefs of some of the affected persons.”

Cooke, in a judgment (pdf) released on Friday in New Zealand, did not accept some of the applicants’ arguments but agreed that the mandate “is not a reasonable limit on rights that can be demonstrably justified” and set the order aside.

“I conclude that the Order does not involve a reasonable limit on the applicants’ rights that can be demonstrably justified in a free and democratic society and that it is unlawful,” Cooke said.

“The order limits the right to be free to refuse medical treatment recognised by the New Zealand Bill of Rights Act (including because of its limitation on people’s right to remain employed), and it limits the right to manifest religious beliefs for those who decline to be vaccinated because the vaccine has been tested on cells derived from a human foetus which is contrary to their religious beliefs,” Cooke said.

However, he pointed out the court’s decision did not affect any other vaccine mandates or any internal vaccination policies of the police or Defence Force.

“In essence, the order mandating vaccinations for police and NZDF staff was imposed to ensure the continuity of the public services, and to promote public confidence in those services, rather than to stop the spread of COVID-19. Indeed health advice provided to the government was that further mandates were not required to restrict the spread of COVID-19. I am not satisfied that continuity of these services is materially advanced by the order,” he said.

“Moreover there is no evidence that this number is any different from the number that would have remained unvaccinated and employed had the matter simply been dealt with by the pre-existing internal vaccine policies applied by police and NZDF. Neither is there any hard evidence that this number of personnel materially effects the continuity of NZDF and police services,” the judge wrote.

The judge also said it was apparent, based on evidence, that the Omicron variant of COVID-19 was highly transmissible and could affect a large number of New Zealanders including police or Defence temporarily but that the termination of jobs arising from the mandate was permanent.

“Vaccination has a significant beneficial effect in limiting serious illness, hospitalization, and death, including with the Omicron variant. But it was less effective in reducing infection and transmission of Omicron than had been the case with other variants of COVID-19,” the judge wrote.

However, Cooke stressed that his decision to set aside the order was not for “the purposes of limiting the spread of COVID-19” but for “the continuity of service of police and Defence.”

“But the order made in the present case is nevertheless unlawful and is set aside,” he wrote.

The applicants were awarded costs.

Associate Professor Helen Petousis-Harris, a vaccinologist at the University of Auckland told Stuff NZ that she was disappointed with the decision and that it legally and morally undermines the mandates.

“It’s really disappointing. These are temporary mandates. They are for the benefit of our whole community. Communities have always depended on our people cooperating and working together – right through time since we camped outside the caves. It’s an essential component of a successful society,” Petousis-Harris said.

“This isn’t working together. Right in the middle of a pandemic, it’s not in the spirit of trying to keep us all safe.”

Spokespersons for both Police and NZDF told The New Zealand Herald that terminations of staff who do not get vaccinated will be suspended while the decision is considered by the government.

A New Zealand Defence Force spokesperson told The Epoch Times, “As the judicial decision has only just been released, we will be taking time to consider it.”

“We are communicating with staff about next steps. In the meantime terminations of employment will not proceed at this time,” the spokesperson said.