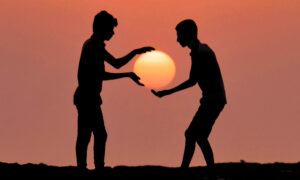 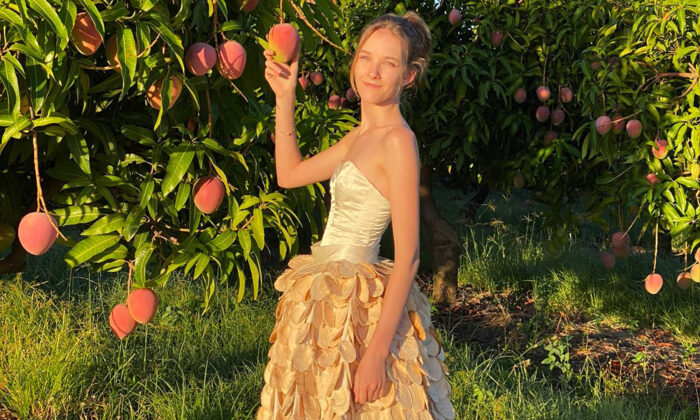 A New Zealand student is raising awareness for food waste and sustainability with a crafty project: She made a beautiful gown from mango seed pits and showcased it for a class project.

Jessica Collins, 18, used the seed husks from over 700 Calypso mangoes to craft a full-length ivory dress you would never imagine is made from something from your produce section.

“It smells like dried mango, if anything, because we dried all the seeds out,” Jessica said in an interview with CBC, adding that she smells “like a walking mango” when she wears the dress.

“It’s got a kind of pearly iridescence color to it, so when it goes out in the sunlight, it shines, actually,” she said, describing the gown. “So it’s quite beautiful.”

A grade 12 student at Abbotsleigh School, Jessica designed the dress for her design and technology class final. It was a personal project for her, fueled by her own experience of seeing so much food waste on farms.

After growing up on her family’s farm and helping pack mangoes, Jessica said she never liked seeing how much fruit ends up being wasted because it doesn’t meet supermarket standards.

“I’ve always seen all the waste from the mangoes, and I just wanted to utilize something like that, because it just gets thrown out and dumped on the farm and it’s never seen again,” she said. “So if I can use something like that and make an alternate source of income for farmers that are struggling, it would be really good.”

Even after her teacher told her the project idea was far-fetched, she decided to try it out anyway.

Still, the process was quite tedious. According to Daily Mail, Jessica cut 700 mango seed pods in half, resulting in over 1,400 pieces for the skirts. She then sewed them together in rows of 20, leaving the shiny side facing outward.

Her passion for the project shows in the end result. The gorgeous ivory-esque dress looks like a ruffled ball gown with a white corset-style top.

Jessica hopes her dress will open minds to different ways of reducing waste. Rather than sewing individual seed pods together, Jessica pointed out that the fibers of mango seeds could be used to craft fabric or other fibrous material.

“It would be like cotton or silk or linen … That would definitely be more suitable,” she told CBC. “There’s a lot of farms around here that would definitely love to be able to see those mangoes used in a way, instead of just dumping them on the farm. So I definitely think farmers would jump on that.”

In an interview with Daily Mail, Jessica also pointed out that the idea of combining sustainable clothing with a career in fashion is appealing to her.

“I love the thought of mixing sustainability with fashion. I think it’s a very big possibility,” she said. “I’d love to see that happen.”