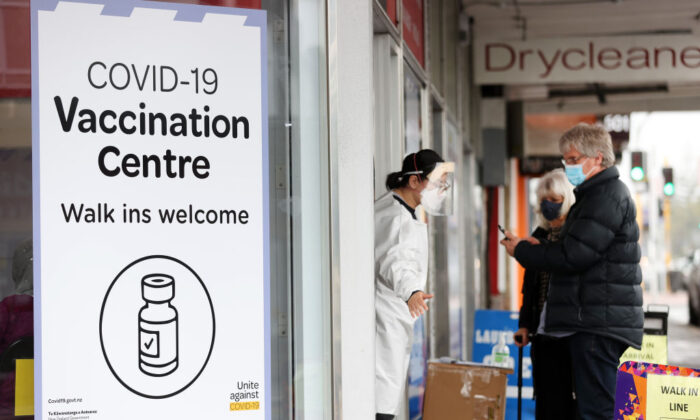 A New Zealand father has been banned from having contact with his three children until the whole family is vaccinated, a family court judge has ruled.

The judgement, made on February 10 by Justice Anthony Grieg, noted that the middle child, aged 11, was “at risk of serious illness/hospitalisation/death in the event that he catches COVID-19.”

Grieg ordered that the two younger children are to receive COVID-19 vaccinations to protect the 11-year-old, a decision that was “accords with their welfare and best interests.”

“It is in the children’s best interests to have the closest possible relationship that it is safe for them to have with their father,” he said.

The eldest child, 12, is deemed old enough to make her own decisions on receiving a COVID-19 vaccine, according to the Ministry of Health.

The Epoch Times is keeping the family members’ identities anonymous for privacy reasons.

“Indeed, if [the middle child] was in the care of two parents who were refusing to vaccinate him, I would consider having him removed from their care until such time as he could be properly vaccinated,” Grieg said in the judgement.

The father, who was on supervised contact with his children until it was suspended on Nov. 25, 2021, argued that he could see his children while taking other precautions, such as wearing a mask, hand washing and sanitising before contact, and having all contact outdoors.

However, Grieg said he would “need advice” from both the contact supervisor and one of his child’s medical professionals “to be sure” of these measures, and that he was currently not prepared to “take the risk.”

The father has not consented to his children receiving a COVID-19 vaccination because he does not believe it is safe nor able to properly protect people from COVID-19.

“He does not trust the science that has been accepted by governments around the world that say this vaccination is not only safe but will protect against severe COVID,” Grieg said.

However, virologist and immunologist, Dr. Robert Malone, has warned parents to think twice about vaccinating their children.

“If you draw the short straw and your child is damaged, most of these things, if not all of them, are irreversible. There is no way to fix it,” he told EpochTV’s “American Thought Leaders” program in an interview.

He also noted that all the data for COVID-19 vaccinations are mismatched for the Omicron strain, with some data even showing that people with three vaccination doses are at higher risk of infection from the current dominant strain.

“This is worrisome because it suggests that there are aspects of Omicron that may be enhanced by something that is associated with vaccination,” he said.

An additional study by the New York State Department of Health and the University at Albany School of Public Health also found that Pfizer’s children’s vaccine effectiveness dropped from 68 percent in mid-December 2021 to just 12 percent in the last full week in January.

The data also suggested the protection against severe disease plummeted, from 100 percent in mid-December to 48 percent in late January.

“In the Omicron era, the effectiveness against cases of BNT162b2 declined rapidly for children, particularly those 5-11 years,” researchers wrote, referring to the Omicron variant of the CCP (Chinese Communist Party) virus which causes COVID-19.

“Should such findings be replicated in other settings, review of the dosing schedule for children 5-11 years appears prudent,” researchers wrote. “Given rapid loss of protection against infections, these results highlight the continued importance of layered protections, including mask-wearing, for children to prevent infection and transmission.”