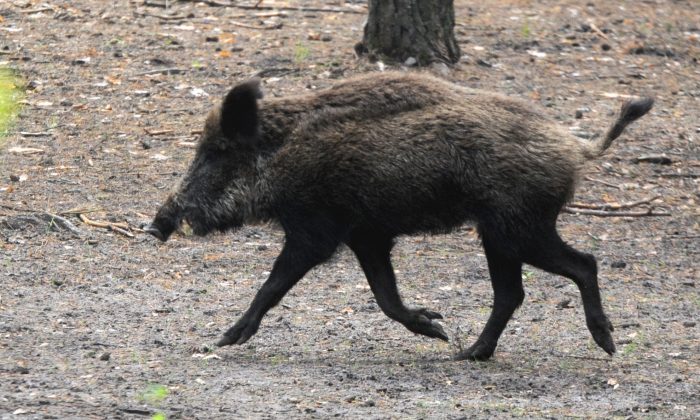 Three members of a family in Putaruru, New Zealand, are unable to move, and could possibly be paralyzed for life, after eating wild boar meat.

Thirty-five-year-old Shibu Kochummen brought the boar home after a hunting trip that day, and he, his 32-year-old wife Subi Babu, and his 62-year-old mother, Alekutty Daniel, ate it for dinner. They began to suffer about half an hour after they started eating.

The three adults are in a hospital in Hamilton, New Zealand, after the meal caused them to vomit and faint.”

“The grandmother was able to speak a bit and she was trying to open her eyelids, but she was still very weak,” a neighbor told Stuff.  “She is the only one that has been able to open her mouth, though, because even though Shibu is out of ICU and in the ward, he hasn’t been able to speak.”

“They both have movement in their arms and legs, but there is still stiffness.”

They were all found unconscious in their home on Nov. 10  by paramedics, who came after Kochummen called for help, according to the New Zealand Herald.

Kochummen and Babu’s two children, who are fine, did not eat with their parents, and were in bed asleep when the ambulance arrived, according to Daily Mail. The children, ages 7 and 1, are now in the care of members of a church the family attends.

The cause of the sudden illness is still under investigation. Officials have taken the remaining boar meat for testing.

National Poisons Centre director and medical toxicologist Dr. Adam Pomerleau suggested that the cause of the family’s illness could be botulism, but said that the fact that they fell sick 30 minutes after ingestion is unusual.

“But it’s all about dose. If the dose is very high, the symptoms could be seen more rapidly—the incubation period could be the day of consumption,” Pomerleau told the New Zealand Herald.

Don Hammond, head of the New Zealand Game Animal Council, said that he’s never heard of a case of someone being poisoned from game meat.

“Thousands of people every day in New Zealand eat wild pork that’s been caught in the bush. It’s a major source of protein in many small rural areas, and I’ve never heard of anyone getting sick from meat that’s been looked after properly,” Hammond said to Radio New Zealand.

Hammond also said that it is impossible to eat enough meat to get secondary poisoning from toxins.

Family friend Joji Varghese told Stuff that a toxicology report is expected out Nov. 17 that could give some answers about what the family is suffering from.

If you like this article, please share it with your friends so we can get enough ad to produce more great articles for you. Thanks!