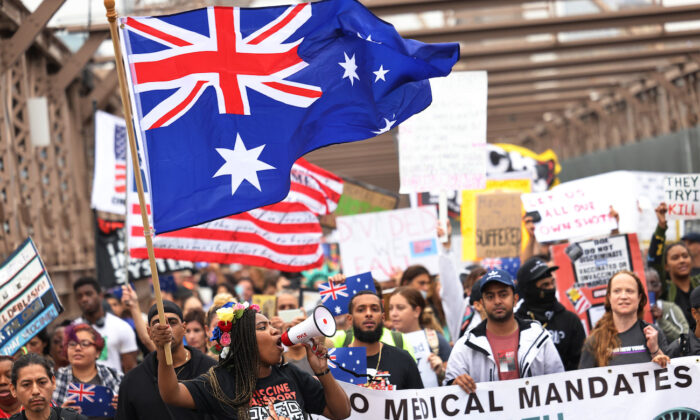 New Yorkers Chant ‘Save Australia’ in Protest Against Vaccine Mandates

Protesters in New York City on Monday waved the Australian flag and chanted “save Australia” in a demonstration against mandatory vaccinations amid the COVID-19 pandemic.

Protesters had gathered in Brooklyn outside the headquarters of the city’s Department of Education for a rally after a COVID-19 vaccine mandate took effect Monday for New York City public school employees.

Hundreds of people chanted “save Australia” as they marched across the Brooklyn Bridge and ultimately congregated outside the Australian consulate in midtown Manhattan. They also chanted other slogans against lockdowns and vaccine mandates, including “freedom,” and “we will not comply.”

During the march, two people flipped over a mobile COVID-19 testing site tent that was set up in Union Square.

According to video footage taken by independent reporter Brendan Gutenschwager, people held signs that read “Australia is the example of the new world order,” and “What is happening in Melbourne?”

Melbourne, an Australian city in the state of Victoria, has seen the longest lockdown in the world. The city has also gained global media attention after multiple videos emerged showing police attacking unarmed protesters amid local protests in recent weeks against COVID-19 vaccine mandates, passports, and lockdowns.

“What’s going on in Australia is not just going to be Australia, and when it shows up on our doorsteps, we’re gonna punch it right in the [expletive] teeth … it is only freedom that we will accept, period!” a man holding a microphone said at the Australian consulate in Manhattan on Monday. A crowd cheered and whistled in support.

At one point, the crowd also chanted, “We’re holding the line for Australia, we support Australia!”

Australia has seen some of the lowest infection and death rates from COVID-19 by global standards. In turn, this has seen popular support surge for state and territory leaders who have readily used strict measures to combat the virus, including border closures and snap lockdowns—sometimes across entire cities over a single case of COVID-19.

Draconian COVID-19 lockdown restrictions continue across metropolitan Sydney and Melbourne and parts of regional New South Wales and Victoria. The state governments have suggested it would ease restrictions once about 80 percent of people are fully vaccinated.

Efforts among Australians to resist lockdowns and vaccine mandates continue among organizations such as National Education United and Reignite Democracy Australia. Telegram groups have become a hub for Australians to coordinate and share their efforts to challenge current vaccine mandates and lockdowns in multiple ways, including by sending letters, signing petitions, launching lawsuits, and organizing peaceful demonstrations.