New York Will Become a ‘Law-and-Order State’ Under Zeldin: DeSantis 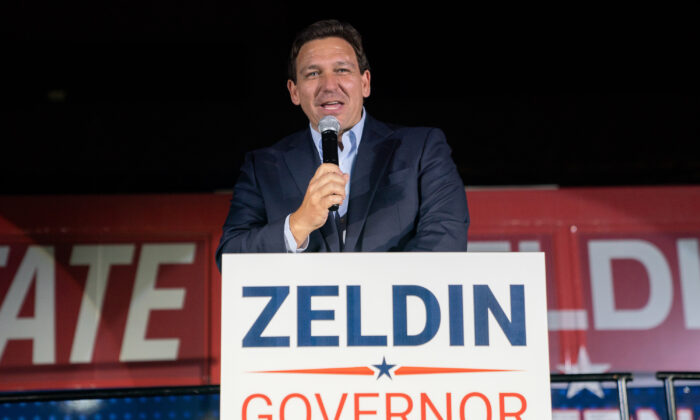 DeSantis, who’s widely expected to win a second term as Florida governor, said New York needs a governor who will “stand up for the men and women of law enforcement” and stop “coddling” criminals, such as by releasing them early from prison.

Crime in New York City jumped by 15.2 percent, with 11,057 crimes in September compared to 9,596 in the same month last year, according to New York Police Department data. Burglary, auto theft, and grand larceny were the categories of crime that saw the biggest increases, rising by 22.7 percent, 21.5 percent, and 21.3 percent, respectively, compared to September 2021.

Crime is one of the biggest concerns for New York voters. According to a recent poll by WNYT-TV/SurveyUSA, 35 percent of the respondents said inflation was the most important issue to them, followed by crime at 18 percent and abortion at 15 percent.

“We need to focus more on supporting the rights of the victims of crime and not be so concerned with the rights of the criminal,” DeSantis said. “Lee Zeldin will not coddle these people. He will hold them accountable, and you will be safer as a result.”

In addition to fighting crime, DeSantis said Zeldin would be able to do what’s right for New Yorkers in terms of COVID-19 policies, energy decisions, and education issues.

“If you have Lee as governor, he’s going to put the kibosh on any attempt to impose medical mandates,” DeSantis said.

New York hasn’t had a Republican governor since 2006. If Zeldin is elected in November, it “will be the 21st-century version of the shot heard round the world,” the Florida governor said.

“So I think this is an important choice for the state of New York. Do you want to continue down the path that you’re on—a path that’s seen you hemorrhage people, wealth, you name it? Or do you want to try a different direction?”

Speaking before DeSantis, Zeldin said the November election presents New Yorkers with an “incredible opportunity to be able to save our state.”

Zeldin noted that if elected, the first thing he would do is remove Manhattan District Attorney Alvin Bragg for his refusal to enforce the law. Bragg is one of several prosecutors linked to progressive billionaire donor George Soros.

Zeldin said he would declare a crime emergency and end cashless bail.

“We want a government that isn’t passing pro-criminal laws. We want district attorneys that actually do their jobs and enforce the law, and we want to back, unapologetically, our selfless, dedicated men and women in blue,” he said.

Zeldin recalled a recent shooting outside his Long Island home on Oct. 9 while his two 16-year-old daughters were in the house.

“You want to know why this is so important to me, to fight crime?” he said. “These two girls were at home doing homework at their kitchen table when my house, just three weekends ago, became the site of a drive-by gang shooting.”

Zeldin also called on his supporters to vote for other Republican candidates—Alison Esposito for New York’s lieutenant governor, Michael Henry for the state’s attorney general, Paul Rodriguez for the state’s comptroller, and Joe Pinion for the U.S. Senate.

Attendees of the Oct. 29 rally told The Epoch Times that they were unsatisfied with how things were going in New York. Several had been Democrats until recently. Orline Borno, who taught history in a Queens high school for 26 years until losing her job over the vaccine mandate, said she’ll be casting her first Republican vote—for Zeldin—this November.

Phil Boyle, who was a state senator representing New York’s 4th State Senate District until retiring on Oct. 21, said the escalating crime situation in New York is “not just a perception” but a reality.

“Because many of us on the island, we read the papers, we watch the news, it seems like every single day, there’s another random act of violence in New York City,” he said.

Hochul had recently announced actions to crack down on crime, but Boyle says it was too late.

“She had plenty of opportunities,” he said. “Governor Hochul has been governor for a year,” but has “made no effort” to repeal bail reform and increase criminal penalties for violent defendants.

Boyle quoted Hochul’s comments on crime during a debate with Zeldin on Oct. 25: “Anyone who commits a crime under our laws, especially with the change we made to bail, has consequences. I don’t know why that’s so important to you. All I know is that we could do more. We could do more.

John Sandusky, a military veteran and retired police officer, said he doesn’t like the direction his state and country were going.

“I’m here to support people that I believe embrace American values and my values,” he said. “I think Lee is the Republican and conservative’s best chance to win the governorship since George Pataki was there.”

Hochul was part of the Cuomo administration that was “incompetent in their handling of the COVID-19 crisis, and I think it’s time to change,” according to Sandusky.

“Decades of Democratic leadership in this state has not made it better,” he said.

Alix Louca, 53, a gym owner, said she was attending the rally “for patriotism.”

“It’s very important that we bring some common sense back into government,” she said.

As a parent, she hopes to make decisions for her children on how they should live.

“Many of us would never have thought we would have the popular governor of Florida to come up here for a rally for Republicans in blue New York, but that just shows that on Election Day, we’re going to have a red wave in New York state,” Boyle said.

“I’m very excited. I’ve been to many, many political rallies in my 30 years in government. This is the largest one I’ve ever seen by far. The energy is palpable.”