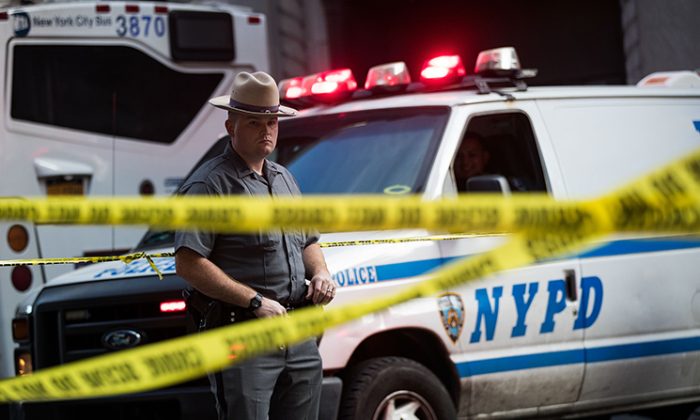 NYC Shootings Up 220 Percent From a Year Ago

Former New York Gov. George Pataki said in a July 26 radio interview that the surge in crime in the city is a fallback to “dark days” when crime in the Big Apple was rampant.

“When I took office, New York was the most dangerous state in America. People got used to safety over the last 20 years,” he told John Catsimatidis on 770 AM, the New York Post reported.

“They don’t remember the time back when we were so dangerous. What we are seeing now is a regression to those dark days when criminals ruled the streets,” Pataki added.

“When parents were afraid to send their kids to school. And when tourists knew better than to come to New York. I’m worried about the future of New York.”

“In a short period of time, the radicals have taken over,” Pataki said.

The NYPD has repeatedly complained that last year’s bail reforms let criminals stay out of jail even after repeated arrests. Another contributing factor could be that as the city was hit hard by the COVID-19 outbreak, many city services were curtailed or shut down, with courts adjudicating only the most pressing cases. Others, such as those involving gun possession, have piled up.

“We’re going backward. It’s tragic,” Pataki said in the interview. “We’ve got to change it.”

Meanwhile, the City Council, at Mayor Bill de Blasio’s recommendation, recently slashed the NYPD budget by $1 billion amid a massive budget shortfall caused by the pandemic lockdown, as well as calls from some politicians to defund the police completely.