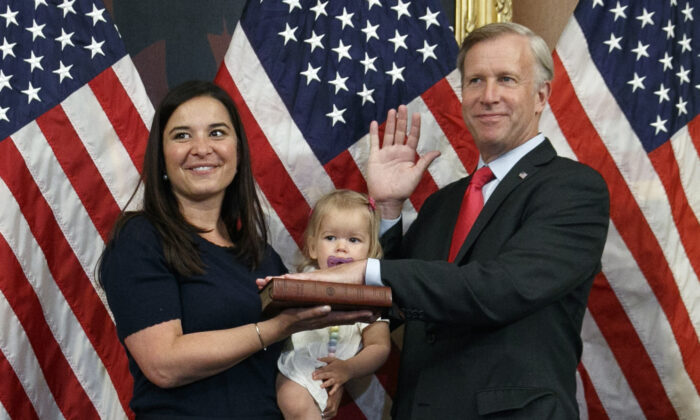 A New York Republican representative who once promised to protect the Second Amendment rights of his constituents has announced that he will not seek reelection after changing his stance on gun control following a spate of mass shootings.

In announcing his decision, Rep. Chris Jacobs, whose 27th New York congressional district is near the recent mass shooting in Buffalo, said his split from the Republican Party on gun control made any reelection bid difficult.

“The last thing we need is an incredibly negative, half-truth-filled media attack, funded by millions of dollars in special interest money coming into our community around this issue of guns and gun violence and gun control,” he said.

Conservatives and Republicans were taken off guard by Jacobs’s new stance, criticizing the move as they fight against the Democrats’ new push for gun control laws in the wake of mass shootings.

Jacobs, who was the only candidate for his district to be endorsed by the National Rifle Association (NRA) during his congressional campaign in 2020, flagged his change of heart in late May.

In an interview with Buffalo News, he described the recent mass shootings at the Buffalo supermarket and Uvalde elementary school as being “profoundly impactful” on him.

“I hope I’ve been compassionate when I read and heard about previous incidents like this that have happened over the years, but I guess there’s just something markedly different when it happens in your city, to people you know,” Jacobs told Buffalo News on May 27.

His remarks came after 18-year-old self-described white supremacist Payton Gendron allegedly gunned down black Americans at a Tops Friendly supermarket in Buffalo, New York, killing 10 and injuring three more on May 14. Authorities described it as a racist attack.

It also came after another 18-year-old suspect, Salvador Ramos, slaughtered 19 fourth-grade students and two teachers at Robb Elementary School in Uvalde, Texas, on May 24.

“Being a father and having young children and visualizing what those parents are going through and, I guess, being able to feel it more personally certainly has had an impact as well,” Jacobs said in his interview.

In late May, Jacobs told a news conference that “if an assault weapons ban bill came to the floor that would ban something like an AR-15, I would vote for it.”

He also said he would support raising the minimum purchasing age for some guns to 21, and would support banning the sale of body armor to civilians, because “I just can’t think for the life of me why a civilian who’s not in the law enforcement sector or security should have the right to obtain that kind of body armor.”

His new position stands in contrast to his campaign promise in 2020 to uphold the rights of Americans in New York’s west district, when he won the backing of the NRA and then-President Donald Trump.

“It is truly an honor to be the only candidate to receive the endorsement of the NRA for NY-27. This is a testament to my conservative record and experience of fighting for the Second Amendment rights of my constituents as County Clerk and New York State Senator,” Jacobs said in a June 2, 2020 release on his Jacobs for Congress website.

He added: “I have always stood with law-abiding gun owners. I promise to uphold this commitment to protecting our rights, and Western New York gun owners can rest assured they have an ally and a fighter for them in Congress with me.”