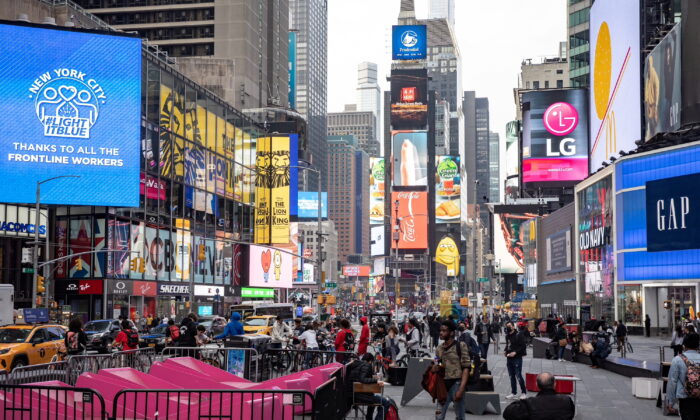 People wearing protective masks are seen in Times Square during the outbreak of the CCP virus in the Manhattan borough of New York City, N.Y., on March 25, 2021. (Jeenah Moon/Reuters)
Politics

“We are ready to bring New York City back fully on July 1,” de Blasio told a news briefing. “Now we can see that light at the end of the tunnel.”

De Blasio said he had not discussed the city’s reopening date with Governor Andrew Cuomo but his announcement comes a day after Cuomo lifted restrictions that would clear the way for a revival of the city’s signature nightlife. The state has the power to impose or lift coronavirus-related restrictions.

“I think the best way to proceed here is to set out the city’s vision,” de Blasio said.

Asked about New York City’s reopening plan at a press conference later, Cuomo said he was “reluctant” to set a date but was hopeful it could happen even before July 1.

“I don’t want to wait that long,” said Cuomo. “I think if we do what we have to do, we can be reopened earlier.”

Even though the July 1 date is still aspirational and other jurisdictions such as Texas have already declared complete reopening, de Blasio’s announcement is significant. New York is the country’s most populous city and was the early epicenter of the pandemic in the United States.

The news was welcomed by many New Yorkers. “It means that we’re getting back on track, that everything’s going back to normal,” said Francisco Krauz, a construction worker who was taking a break on Manhattan’s Upper West Side.

Rob Dicks, head of IT consulting firm Accenture’s capital markets talent and organization practice, said he was eagerly awaiting the full reopening, his appetite whetted by a recent business meeting he held in Manhattan after a year of Zoom meetings.

“It was surreal to be back in Midtown for the first time in a year, having a face-to-face client meeting outside at a restaurant,” he said. “Video is an evolution … and is effective, but there are some topics that just need to be covered face-to-face.”

The mayor said his optimism on the city’s return to normal reflected the progress of a massive vaccination drive. He said 6.4 million doses of vaccine have been administered in the city of more than 8 million residents.

More than 42 percent of residents have received at least one shot of a coronavirus vaccine, according to city data.

Coronavirus cases, hospitalizations and deaths have trended lower in New York City since the beginning of the year. On a seven-day rolling average, the city reported over 7,000 new cases a day at the outbreak’s peak in January. By March new infections ebbed to 4,000 a day and now average about 2,000 a day.

De Blasio did not provide clear guidelines on whether those attending shows, dining indoors or frequenting gyms and salons would have to adhere to any specific requirements, such as presenting proof of vaccination.

“There certainly will be particular institutions that may choose to have rules around a vaccination or testing,” he told reporters, adding that the city will keep monitoring COVID-19 data and adjust its approach accordingly.

Currently, the New York Yankees and Mets require those attending baseball games to take a rapid COVID-19 test or show proof of vaccination before gaining admission to their ballparks in keeping with New York state guidelines. Attendance is limited to 20 percent of capacity.

On Wednesday, Cuomo set a date for the end of a curfew that had forced city restaurants to end their bar and food service by midnight. The curfew would end on May 17 for outdoor dining areas and on May 31 for indoors, he said. The governor also allowed seating at bars across the state to reopen for the first time on May 3.

In addition, Cuomo said capacity limits would increase starting May 15 for several businesses outside of New York City, including gyms and casinos. Offices across the state, including in the city, will be able to increase capacity from 50 percent to 75 percent, the governor said.

By Peter Szekely and Maria Caspani