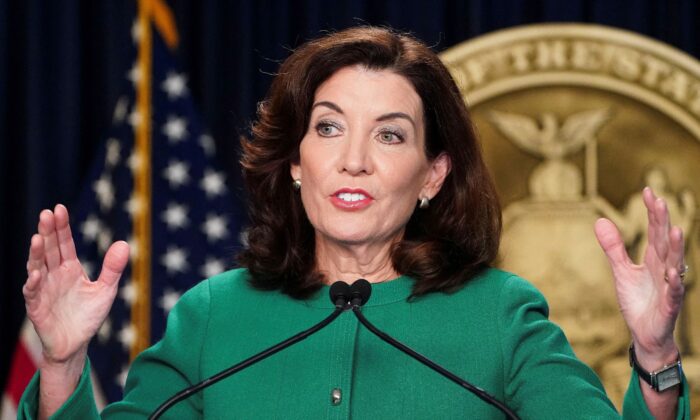 New York Gov. Kathy Hochul speaks during a news conference amid the coronavirus disease (COVID-19) pandemic, in the Manhattan borough of New York City, on Dec. 14, 2021. (Carlo Allegri/Reuters)
US News

New York Gov. Kathy Hochul said the state is making an adjustment regarding how hospitals will report patient intake by separating hospitalizations with COVID-19 or because of COVID-19 amid an increase of cases driven, in part, by the Omicron variant.

“Is that person in the hospital because of COVID or did they show up there and are routinely tested and showing positive and they may have been asymptomatic or even just had the sniffles,” she also said, adding that an individual who is “is in a car accident” who goes “to the emergency room” and tests positive are “not there being treated for COVID.”

Her statement on Monday is similar to comments that were made by White House pandemic advisor Anthony Fauci, who last month said it is important to distinguish between a child who is hospitalized because of COVID-19 or who tested positive for COVID-19 after being admitted to the hospital.

With Hochul’s announcement, New York hospitals must now determine whether patients with COVID-19 came to the hospital because of their COVID-19 symptoms or due to another medical issue.

As of Monday, there were about 9,500 people hospitalized in New York state medical facilities, according to data from Hochul’s office.

Overall, the United States has seen a daily average of 486,000 cases of the CCP (Chinese Communist Party) virus, which causes COVID-19, over the last week, a rate that has doubled in seven days and far outstrips that of any other country. The 978,856 new infections on Monday include some cases from Saturday and Sunday, when many states do not report.

But studies and data suggest the Omicron variant presents less severe symptoms and fewer hospitalizations. An official with the World Health Organization (WHO), which named the variant in late November, admitted as much on Tuesday and noted the Omicron strain mostly affects the upper respiratory tract, causing milder symptoms than previous variants.