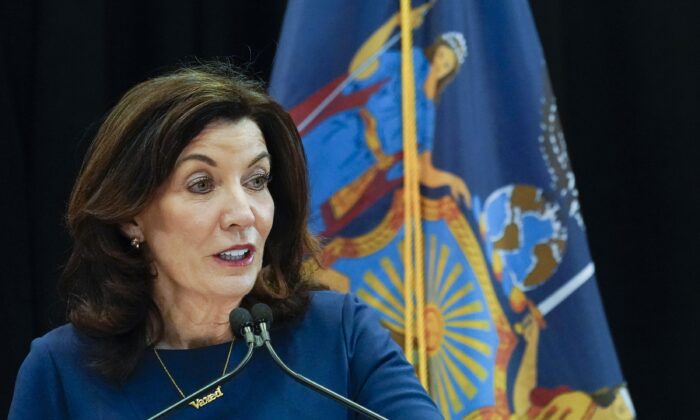 New York’s governor said Monday that her administration will not seek to compel counties to comply with her new mask mandate, which took effect on Dec. 13.

“I do hope that the businesses will enforce this, and individuals will understand how important it is,” Gov. Kathy Hochul told reporters at a briefing in New York City.

“We have left it to the counties to enforce, so counties can choose not to enforce. But we hope counties are enforcing,” she added later.

Hochul, a Democrat who replaced Andrew Cuomo when he resigned earlier this year, on Friday announced that masks would be required in all indoor public places unless the entities imposed vaccine mandates.

Officials in multiple counties, though, are refusing to enforce the mask mandate.

“Governor Hochul derided the use of these types of measures just days ago. Now, we are back to Cuomo-era approaches. That is an unfortunate, and swift, switch of position by the governor,” Livingston County Board of Supervisors chair David LeFeber said in a statement.

Rockland County Executive Ed Day said enforcing the mandate would mean taking workers “who are vaccinating children and others right now with a life-saving vaccine” and have them “go walk around to different places to figure out whether people are masking up or not.”

“That would be utterly reckless on my part and I will not do that,” the Republican said.

Saratoga County Board of Supervisors Chairman Theodore T. Kusnierz, Jr. said in a statement on Monday that its public health department and law enforcement “will not enforce New York State’s misguided and unrealistic mask mandate.”

“Importantly, under no circumstances will the County enforce the harmful provision that bars school children from taking mask breaks,” he also wrote.

Hochul was pressed on whether counties that don’t enforce the mandate will face repercussions. She indicated they will not, though she urged them to carry out enforcement.

“It’s in the best interest of public health, but it also comes down to individual businesses doing the right thing as well,” she said, calling the mandate “a very short-term, minor effort” in compared to lockdowns imposed last year by Cuomo.

Hochul said she would never order lockdowns but left open the possibility of extending the mask mandate.

“It’s a temporary measure, as long as people follow it,” she said.

New York City Mayor Bill de Blasio, a Democrat who has imposed some of the strictest mandates in the country, is also expected to announce a bid after leaving office due to term limits at the end of the year.

About 70 percent of people in New York are fully vaccinated, according to state data. Over 9 out of 10 New Yorkers 18 or older have gotten at least one vaccine dose.

Hochul spoke after joining the Kings County Democratic County Committee at a holiday party last week. Hochul shared a picture of herself not wearing a mask, despite being indoors. She did not wear a mask while announcing a new terminal at the John F. Kennedy Airport on Monday, but put one on before taking questions from reporters.

Hochul’s office did not respond to a request for comment.