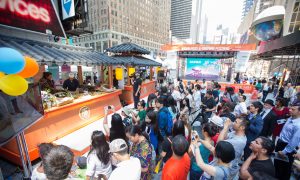 NEW YORK—Times Square is not typically known as a culinary center, but once a year its flashy, billboard-lined streets are transformed into imperial kitchens styled after China’s most glorious historical period, the Tang Dynasty.

New Yorkers cannot help but draw near to the city’s top chefs as they whip up delectable dishes using Asian flavors and cuisines. For some, it’s a taste of home. For others, it’s a chance to gather with a community that shares a passion for Asian culture and the culinary arts.

This is the Taste Asia Food Festival, the largest Asian food festival in North America, hosted by Epoch Times and New Tang Dynasty (NTD) Television. This will be its second year at the city’s famed tourist spot, and the event has gotten much, much, bigger.

“Although Asian cuisine has only gotten more popular, there’s still so much that remains undiscovered (at least by those outside the culture!)” said Channaly Philipp, co-curator of Taste Asia Food Festival and managing editor of Epoch Taste, Epoch Times award winning dining section.

“We hope to go beyond the clichés (as delicious as they might be) like chicken tikka masala or banh mi. There’s a world of flavors that I would say is even more delicious—and surprising.”

The event kicked off in the beginning of June with the Best NYC Asian Restaurants ​contest and will culminate in a two day foodie extravaganza on June 26​–27 in Times Square.

The contest, which is still going on, promotes and invites participants to vote for their favorite Indian, Japanese, Korean, Chinese, Thai, Southeast Asian, Asian fusion, and Asian inspired local restaurants.

The first day of the event will feature demonstrations from some of New York’s top chefs, such as David Bouley of Brushstroke, a Michelin starred Japanese Kaiseki restaurant, and Japanese Iron Chef Yuji Wakiya, who can be found at KOA restaurant.

There’s also Hemant Mathur, who helped Devi become the first Indian restaurant in the United States to earn a Michelin star while he worked there as co-executive chef. He then went on to open his own restaurant Tulsi, which has consistently earned a Michelin star each year since opening in 2011. Named one of the best Indian chefs in United States by GQ, he is now focusing on regional cuisines of India through his own restaurant group Fine Indian Dining.

In addition, a whole new generation of chefs with innovative takes will present their cuisines, like Esther Choi of Mokbar, located in Chelsea Market, who’s combining Korean flavors she learned from her grandmother with ramen noodles; or Brian Tsao, head chef at Mira Sushi & Izakaya, whose dishes are Korean, Chinese, and American—think of a bulgogi grilled beef taco (that beat celebrity chef Bobby Flay, by the way, on Flay’s Food Network cooking-competition TV show).

“We hope to show off the incredible diversity of chefs—some who have embraced authentic culinary traditions and others who have embraced their own creative approach,” said Philipp. “When selecting chefs we were also guided by our taste buds.”

On the second day at Times Square, the world’s best authentic Chinese food chefs will fire up their woks and battle it out in Taste Asia’s fully equipped, outdoor kitchens in an international Chinese culinary competition. China’s five distinct regional cuisines will be explored: Sichuan, Shandong, Huaiyang, Canton, and the Northeast.

Attendees can watch the demonstrations live and up close. Throughout the event, there will also be cultural performances and food from local restaurant booths, including The Handpulled Noodle​, Totto Ramen, Nyonya, and Obao Noodles & BBQ​. Cathy Erway​, celebrated author of “The Food of Taiwan” and “The Art of Eating In,” will be hosting a Dumpling Making & Eating Contest.

Seven Years in the Making

Taste Asia has its beginnings in a single Manhattan restaurant, where the first International Chinese Culinary Competition was held seven years ago. Since then, over 500 notable chefs have participated, drawing thousands of New Yorkers and visitors to Times Square.

The birth and expansion of Taste Asia reflects New York’s cache as a unique culinary breeding ground. In New York one can find a full spectrum of cuisines and flavors, from the most traditional to the most innovative.

During a press preview on June 10, three chefs from distinctly different backgrounds and cultures each presented an authentic local dish.

Zizhao Luo, the 2011 Gold Award Winner of the International Chinese Culinary competition and head chef at Radiance Tea House, crafted crispy duck skin served with a sweet and sour plum sauce. Luo spent most of his life in China and trained extensively in traditional Cantonese cuisine. Before coming to the United States, he belonged to an exclusive group of master chefs in Beijing.

Mathur cooked a delicious shrimp balchao (spicy stew), a Goan recipe that was heavily influenced by Portuguese ingredients such as vinegar and bread.

One does not need to be from Asia or be an Asian chef to cook with authentic Asian flavors.

Third-generation chef Joe Isidori served up his grilled watermelon, a refreshing dish for the summertime.

“When I first tried Joe’s grilled watermelon, there was something about it that reminded me of home. Then I found out that he used fish sauce and lime juice, which are ingredients I grew up with,” said Phillip, who was raised on Cambodian food. “I was transported to my mom’s kitchen.”

One does not need to be from Asia or be an Asian chef to cook with authentic Asian flavors. In New York, we can find all the necessary ingredients right in our own backyard.

Originally from the Bronx, Isidori first found inspiration from local markets, where his father taught him how to buy ingredients.

“Being in New York City, 9 out of 10 are Asian markets. I don’t cook Asian food. I just cook with Asian flavors,” said Isidori. “My cuisine is a melting pot cuisine because I am a product of a melting pot. I’m a New Yorker.”

“Chefs are creative people so they will bring themselves into their cooking. Their cuisine reflects who they are. That’s what’s amazing about Taste Asia in New York—we can select all these influences. There’s nothing forced. It flows from who they are as individuals,” said Phillip.

“The Epoch Times has its roots in Asia, so what better way to celebrate Asia in our dining initiatives then to create a Pan-Asian grand event at the crossroads of the world?” said Jan Jekielek, co-curator of Taste Asia Food Festival.

“This is just the beginning—expect to see more Taste Asia events, products, and publications in the coming year,” said Jekielek.