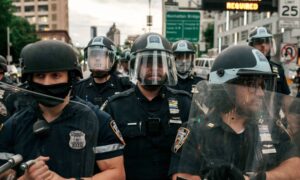 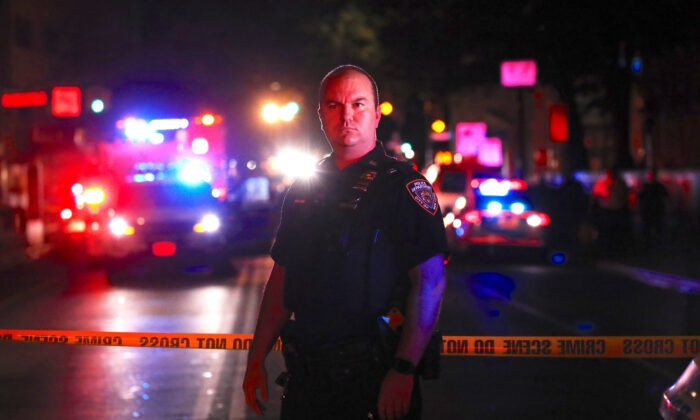 Police gather at the scene where two New York City officers were shot in a confrontation, in New York on June 3, 2020. (Spencer Platt/Getty Images)
NY News

BROOKLYN—New York City is spiraling into a rule-of-law crisis, according to the city’s police department, citing the recent surge in shootings and a paralyzed justice system that can’t keep repeat offenders off the streets.

While the NYPD has sounded the alarm for months, city leaders seem to be headed in the opposite direction, slashing the department’s budget by $1 billion.

“I hope I’m not the only one—it takes a long time to turn the ship—that sees the iceberg directly in front of us,” NYPD Commissioner Dermont Shea told NY1 on June 22.

The problem is the result of multiple compounding factors, several current and former NYPD leaders said. First, the city passed a bail reform law that allowed more criminals to immediately get back on the streets. Then the city went into lockdown in response to the CCP virus pandemic, resulting in the shutdown of the court system, which created a sizable backlog of cases. It then released hundreds from its jails, saying it would mitigate the spread of the virus among inmates.

Finally, protests sparked by the death of George Floyd during his arrest in Minneapolis in May quickly turned violent, fueling resentment toward police and elevating calls for abolishing police altogether.

There were 250 victims of shootings across the city between June 1 and June 28—an increase of nearly 160 percent from the same period last year, and the largest number for that four-week time frame since 1996.

On the Fourth of July weekend, 39 people were shot across the city, including two men in East Flatbush, Brooklyn. A 20-year-old died after a dispute during a party that spilled out into the street ended with bullets flying.

Three days later, the street had been cleared and there was no evidence of a crime scene. Three men fixing a car on the street said the incident was a celebration gone wrong.

“Their energy in the city is all messed up,” one said, declining to provide his name.

The city needs to reopen recreation facilities, said two women sitting on the stairs of a house near the scene of the crime.

Frustration among the youth runs high as the virus lockdown forced them to stay inside even as the summer came, they said.

One said she’s never seen anything like this on the block in the 28 years she’s lived there.

Indeed, crime has been on the decline in the city for decades, even as the rest of the country saw a major spike in violence in 2015–2016. Much of those improvements now seem erased in a matter of a few months.

“When you ask the police department now to somehow wave a magic wand and fix [this] when you’re putting all the dangerous people back on the street, you’re seeing what’s happened,” Shea said. “And the shame is, again, this is not a surprise. We knew this was coming. We warned people. We asked people to change and fix the law. We asked people to do many things, but I can’t remember the last law that was passed that actually helped law enforcement, and that’s a shame.”

He pointed out that “a month or two ago,” he was already warning people of “a storm on the horizon.”

Meanwhile, the City Council, at Mayor Bill de Blasio’s recommendation, passed a $1 billion NYPD budget cut amid a massive budget shortfall caused by the virus lockdown as well as calls from some politicians to defund the police completely.

De Blasio said the money will instead go to affordable housing and youth programs and so address the underlying issues that lead to criminality, such as a lack of recreation or jobs for young people in poor neighborhoods.

The NYPD has repeatedly complained that last year’s bail reform has allowed criminals to stay out of jail even after getting repeatedly arrested.

“[It] basically diminished the authority of the courts to keep people in jail pending trial,” Kerik said. “So you have people now that get arrested and they’re back on the street in six hours.”

“We cannot expect the police to go out there and fix laws that are broken. We cannot stop our way out of this problem,” Shea said. “We need bad people held accountable, and right now we have a lack of accountability.”

“We have arrested individuals more than 20 times since the pandemic started and we see them continuing and continuing to get right back out,” he told Fox News. “When we look at pre-pandemic and beginning of the year, we did see a large number of people released on their own recognizance, by judges across the city, who were carrying an illegal firearm.”

As the city was hit hard by the CCP virus pandemic, most city services have been shut down or significantly curtailed. Courts only adjudicate the most pressing cases, and even those are conducted virtually. Cases have thus started to pile up.

“We have over 1,000 people that have been indicted on a gun possession charge, where the cases are open, and they are walking around the streets of New York today,” LiPetri told The New York Post in June.

The lockdown was no excuse, according to Kerik.

“If you were doing it right and you were aggressive, lockdown or not lockdown, you can handle that,” he said.

At worst, the suspects would simply sit longer in pre-trial detention. But then again, that system has been virtually crippled by the bail reform.

“We’ve been trending this way for a while. And the shootings are just the latest symptom,” Shea said. “We need the criminal justice system to start working, quite frankly.”

The city, however, went out of its way to release many people already locked up.

As part of his promise to shut down the city’s notorious jail on Rikers Island, de Blasio has dramatically reduced the jail population. Hundreds were released as part of the campaign to “stop the spread” of the virus.

But the city can’t expect to release large numbers of inmates and face no repercussions, according to Shea.

“There’s literally almost no one in jail when you look at the levels. You cannot have the releases that we’ve had, the continued population declines with really, where’s the aftermath?” he said. “Where are the questions about supervision, parole, etc.?”

While the city jails are far from empty, the jail population has nearly halved since 2019.

There were more than 8,000 people on average in city jails between January and March 2019 (pdf).

The whole idea of closing Rikers Island was nonsensical to Kerik, who used to run the jail system and accomplished massive reductions of inmate-on-inmate violence.

“They had corruption, they had assaults by staff, they had violence in the system, all that stuff they had had nothing to do with the facilities,” he said.

If de Blasio spends billions on new facilities, but puts the same staff and inmates inside, “how’s that going to help you?” Kerik asked rhetorically.

“It doesn’t help, it doesn’t do anything. It’s stupidity.”

The solution is to change the management and “make everybody accountable to do their job,” he said.

In June, Shea announced the NYPD will eliminate its plainclothes anti-crime units, about 600 officers, and will transfer those personnel to detective assignments and neighborhood policing.

Shea noted that the move is “not without risk,” questioning whether the decision would result in fewer guns being taken off the streets of New York City. But he said the risk rests “squarely on my shoulders.”

According to Kerik, this is another factor fueling shootings, because anti-crime units specialized in discovering guns.

“Your whole sole function in life is to go look for guns,” Kerik said. “Because you’re in plain clothes, you can walk around communities, you can respond to jobs.”

“Piece by piece, de Blasio has whittled away a unit by unit, and on top of that handcuffed the police,” Kerik said.

He referred specifically to de Blasio’s instruction to handle the rioting after Floyd’s death with a “light touch.”

Combined with the other issues, there’s a resentment brewing within the NYPD.

On June 26, the commander for the Bronx precinct resigned in protest of the city’s management.

“I was shocked,” he said. “You know why? It had to be endorsed by the police commissioner.”

Shea voiced support for “quality-of-life” policing, also called “broken windows policing.” The strategy focuses on arrests for minor offenses, particularly in cases in which the officers know from experience that the conduct is likely about to escalate into more serious crimes.

“We cannot step away from quality-of-life policing, and we also need to support our police officers that are out there doing a very difficult job,” he said, noting that almost every shooting the weekend before “had three common nexuses: alcohol, marijuana, and dice games.”

“We tie it to street lawlessness right now,” LiPetri said. “The small amount of individuals that are out there causing mayhem, they feel empowered. We see an increase in dice games on the street. We’re seeing an increase in house parties [that are] then getting violent. So the individuals that are causing these quality-of-life conditions are the very people that are then part of the violence after the fact.”

Kerik doubts dice games are a significant factor in street violence. He commented, however, on going after minor crimes.

In the 1990s, under Mayor Rudy Giuliani, he remembered, the NYPD started to arrest people for trivial crimes like skipping subway fares. As it turned out, a large portion of those arrested were sought by police for more serious crimes.

Kerik said the methods the NYPD adopted at the time might not have been nice, but violent crime did drop by 60 percent.

The two women in Brooklyn, however, saw the other side of the coin. The incessant stops by police, constant probing for minor infractions leaves emotional scars, they said, recalling several incidents of their own.

“You can’t arrest yourself out of every situation,” he said, bringing attention to approaches like the precision policing model, which focused on the most notorious criminals who commit a large share of violent crimes, and the neighborhood community officer (NCO) program, which designates certain officers as liaisons for their communities who people can call with problems that haven’t yet raised to the level of a crime.

The NCO program started in 2014 and appeared to make a difference, according to Shea.

“Our NCO program … was seeing unbelievable results,” he said. “We’re not hearing much about that lately.”

Update: The article has been updated with information.