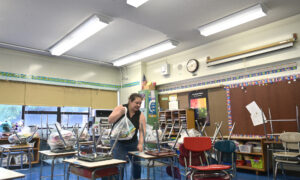 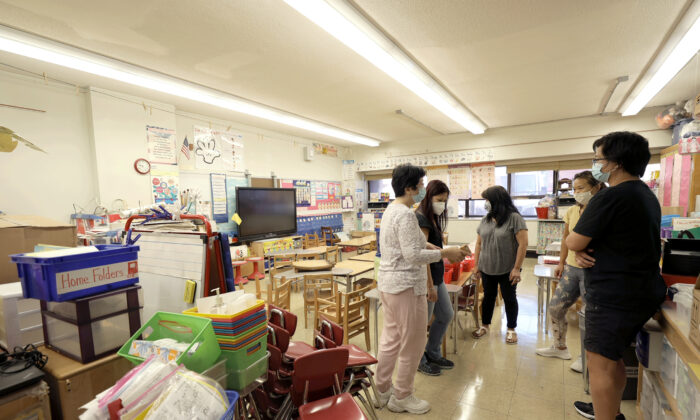 New York City’s largest teachers union has won a battle to keep teachers and other educators employed if they suffer from certain medical conditions and as a result don’t want to comply with the Big Apple’s COVID-19 vaccine mandate.

An arbitrator ruled late on Sept. 10 that teachers with certain documented medical afflictions must be offered assignments outside of classrooms and be kept on the city’s payroll.

Other educators who don’t want to get a COVID-19 vaccine must be offered unpaid leave that keeps their health coverage in place or a severance package.

City officials announced in August that all 148,000 of the New York City Department of Education’s employees would have to get a COVID-19 vaccine, with limited exemptions.

The city had planned to remove people who were granted an exemption from the payroll, infuriating the United Federation of Teachers (UFT), the city’s largest teachers union.

“That was it for us,” Michael Mulgrew, the union’s president, said recently on NY1.

That prompted pushback, which ultimately resulted in the arbitration decision, even after New York Mayor Bill de Blasio seemed to publicly reverse the stance during a Sept. 8 press conference.

De Blasio said that few cases of medical or religious exemptions being granted are expected, “but they will be honored” if approved.

“Those folks will continue to work for us in some capacity, in some location. We got to work that through,” he said, referring to the arbitration.

Mulgrew said it was the pushback from the union that led to the reversal.

“After our demand for independent arbitration, the city backed off its initial position that all unvaccinated personnel be removed from payroll, and will offer out-of-classroom work for those with certified medical or other conditions,” he said in a statement after the arbitrator’s decision was released.

Educators with a documented “contraindication,” as defined by the Centers for Disease Control and Prevention (CDC), for the vaccines are now able to refuse to comply with the mandate.

Temporary exemptions will also be granted if a person has received a monoclonal antibody treatment within the previous 90 days, is being treated for conditions as delineated by the CDC, or has suffered heart inflammation, a condition seen in some people after they receive a COVID-19 vaccine.

Religious exemptions must also be approved, but not if the leader of the religious group has spoken publicly in favor of the vaccine and not if the request is deemed “personal, political, or philosophical in nature.”

More than 80 percent of the city’s teachers have already been vaccinated, according to the UFT. Schools Chancellor Meisha Porter pegged the number as 72 percent on Sept. 8.

De Blasio’s office and the New York City Department of Education didn’t respond to requests for comment by press time.

“Our vaccine mandate was put into place for the health and safety of our children and the protection of our employees,” Porter told NBC New York in a statement. “We’re pleased that the binding Arbitration was issued before the first day of school, and we will swiftly implement the terms.”