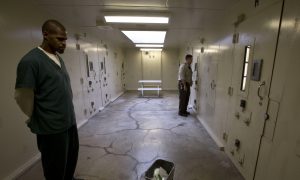 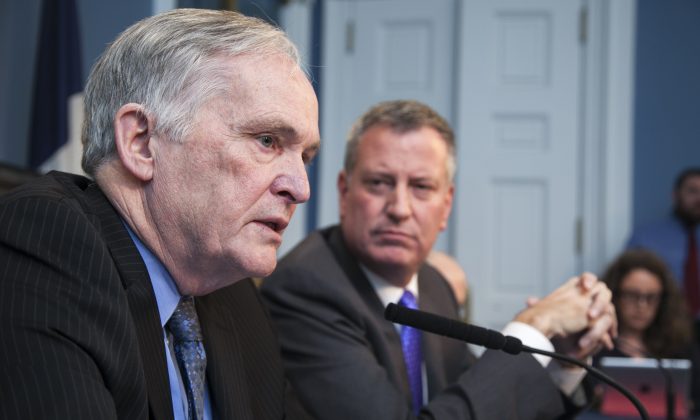 NEW YORK—At a Thursday press briefing on the Department of Correction’s planned reforms of jail conditions at Rikers Island, Mayor Bill de Blasio and Corrections Commissioner Joseph Ponte expressed that their biggest challenge is how to provide for mentally ill inmates.

The mayor said the high proportion of inmates with a mental illness—at 40 percent of the total population at Rikers Island—was a reality that the Corrections Department failed to address, and was at times unwilling to. Half of all violent incidents reported at Rikers involved mentally ill inmates.

“There was no public acknowledgement that the problems on Rikers Island were first and foremost a mental health problem,” the mayor said. “We literally as a city, didn’t diagnose the problem until now.”

To that effect, Ponte replaced over 90 percent of the top leadership, or 25 to 30 staff, including uniformed and civilian positions.

The department is also establishing a new housing unit where the most violent inmates will be kept. Just over 2 percent of inmates at Rikers are responsible for the most serious acts of violence, said Ponte. At the new “enhanced supervision housing” unit, the officer-to-inmate ratio will be increased, and inmates will spend seven hours of the day out of their cells.

The department had previously relied on solitary confinement—referred to as “punitive segregation”—to punish inmates who violated jail rules. There, inmates spend 23 hours-a-day in isolation. Ponte said the new unit will allow corrections officers to keep jails safe without having to use solitary confinement as a means to discipline inmates.

The new housing unit is financed with part of $32.5 million that the de Blasio’s administration allocated in June for providing mental health services and preventing violence at city jails.

With regard to inmates with severe mental illnesses, they are excluded from solitary confinement upon diagnosis. Such inmates make up seven to eight percent of the total population.

For inmates with less serious mental illnesses, who occasionally act out violently, the Corrections Department is still working with the Health Department to come up with a way to humanely manage them.

First Deputy Mayor Anthony Shorris also acknowledged at the press briefing that the entire health care delivery system at Rikers is “not meeting the standard,” and said changes in that area will be announced in the coming months.

The Corrections Department also reduced the maximum length of solitary confinement from 90 days to 30 days for each rule infraction. It also ended the practice of “time owed,” or requiring inmates to finish serving the time in solitary confinement that they did not complete during their previous incarceration.

Within 18 months, the department will also install an additional 7,800 cameras to cover all jail facilities at Rikers, allowing for enhanced transparency.

The mayor said he will visit Rikers Island in December to monitor how conditions have changed there.