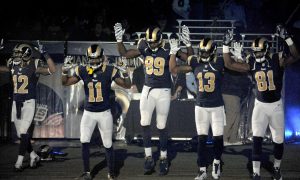 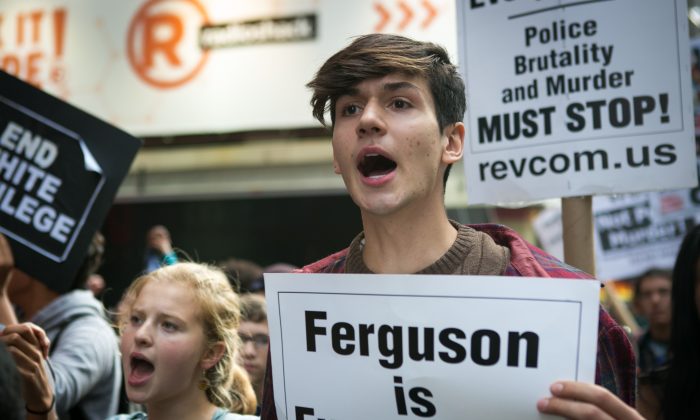 High school students hold signs as they march around the streets of New York on Dec. 1, 2014 in protest of the grand jury in Missouri’s decision not to indict officer Darren Wilson. (Benjamin Chasteen/Epoch Times)
New York

NEW YORK—Hundreds of high school students walked out of class on Monday around lunchtime and gathered at Union Square to march in solidarity with Ferguson walkout protests happening across the country.

Fresh-faced students from at least three boroughs screamed the chants, “Hands up, don’t shoot!” which morphed into chants of “Join us!” when they crossed P.S. 212 in Midtown, little kids peering curiously back at them.

The chants then turned into angry obscenities hurled at police when the protesters marched back to the police station in Times Square.

For the past week, just before and following the St. Louis county grand jury’s decision in Missouri not to indict officer Darren Wilson for murder in the shooting death of a teenage black man, protests have erupted in New York as well as throughout the country.

In New York, white police officers causing the deaths of unarmed black men is an issue that also hits close to home: Eric Garner from Staten Island died in July after a police officer placed him in a chokehold, and Akai Gurley was shot and killed last month in a Brooklyn stairwell by a rookie officer.

To keep the nation aware of the ongoing injustice of police brutality, the strategy is for protesters to keep coming back and refusing to go away, said Mojique Tyler, 17, one of the key protest organizers. He was notified about the planned walkouts by the Ferguson Action Team about four days earlier and started organizing the New York version immediately.

Tyler, who is a senior at Bard High School Early College in Manhattan, rallied hundreds from his school by handing out flyers, and contacted several other high schools through social media and networking with other student leaders. Overall, he was pleased with the turnout.

The New York protests have been docile compared to the escalated violence in Ferguson, although some were arrested Monday afternoon and several others on previous occasions. Police lined up and rode motorcycles to follow the protest Monday, warning people not to obstruct traffic as they headed southwest.

In defiance of the order, the crowd marched onto the road, filling up 8th Avenue to capacity, in spite of honking cars. Police then arrested at least four protesters, including a student who attends school in the Bronx.

The frequency of arrests when people lingered in the street intimidated some students as they jaywalked several blocks downtown.

About 30 students from Fiorello H. LaGuardia High School in Manhattan left class at roughly 1pm to join the protests. They said the principal and teachers warned them that they might get suspended for walking out of class.

Even so, for students, the price of walking out of school can be more than the threat of arrest. The principal and several teachers at Fiorello H. LaGuardia High School refused to let students join the protest, finally declaring that anyone who left would be suspended. The faculty acted out of concern for their jobs, noted one student.

“They took down our names,” said Alex Crowe, 16, a sophomore. Security guards also watched the exits, but that didn’t stop at least 20 students from heading down to Union Square around 1 p.m.

Sule Murray, 15, said that school officials claimed the students had no parental permission when that wasn’t the case. “My mom said she was proud of me for coming here.”

Come Tuesday, the LaGuardia students plan to return to school, where they’ll figure out what happens next.

Another one of the main organizers, Shana Buckstad, 17, a senior at New York Harbor School on Governor’s Island, exchanged Facebook messages with Tyler last Monday at the Union Square pre- and post-indictment decision protest.

When she heard of the protest Tyler was planning, she convinced 167 students and four teachers from her school to attend. The consequence, however, was that the principal took her aside and said she would be suspended for a month.

“I’m taking the fall,” said Buckstad, somberly. No one else at her school would be getting punished. But she was quick to amend her statement: it was a great cause that she was willing to go to great lengths for, such as marching for miles following the grand jury decision.

Crowe shared her sentiment, in saying that fighting for racial injustice was worth the suspension.

Many of the protesters were looking for change, but not willing to settle. Fourteen-year-old Daniele Whitely, a freshman at Bard, said she would have come out to protest even if officer Wilson had been indicted.

Meanwhile, protesters also held out hope for the future: as they rallied and chanted, President Barack Obama was meeting with New York Mayor Bill de Blasio and other elected officials in Washington to discuss how to mend the relationship between communities and police.

Tyler’s strategy will continue as well. The protest organizers will hold a meeting Tuesday to plan the next step. “Preferably a sit-in—those are powerful,” said Buckstad.