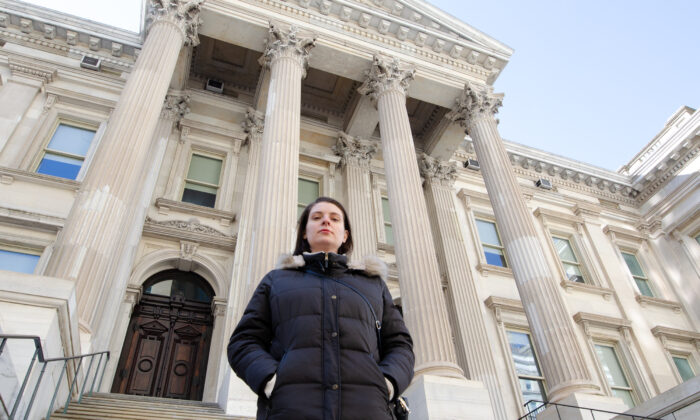 NEW YORK—New York City’s Department of Education (DOE) on Feb. 14 notified unvaccinated teachers and other school employees of their terminations, which it had been threatened for several months.

“I am officially unemployed and fired, despite having a clean record,” elementary school teacher Nadia Lyakhnovich told The Epoch Times after receiving the email.

Lyakhnovich is not alone. The number of City employees terminated is estimated between 900 and 1,430, according to secondary school teacher Rachel Maniscalco, who was put on unpaid leave last fall for not getting the vaccination.

Maniscalco believes the DOE has circumvented termination laws. “When you’re terminated, you need a 30-day notice in writing,” she told The Epoch Times. “No one received that.”

“There was no due process; there were no 3020A hearings,” she said, referring to the proceedings before an arbitrator when authorities seek to strip a teacher of her or his tenure and potentially terminate the teacher.

“When you’re terminated, especially from a City job, they have to cite a reason, insubordination—whatever. There was no reason given for any of these firings,” Maniscalco said. “How do you fire a thousand people, give or take, with no reason other than ′you didn’t get this experimental shot′?”

She said the United Federation of Teachers (UFT) filed a lawsuit last week to get an immediate injunction to stop the termination of the teachers, but was not successful. Up until that point, the UFT was not aiding these teachers in their plight.

“I don’t know why the UFT cares after six months, to be honest with you,” Maniscalco said.

Maniscalco was an English and special education teacher in Staten Island on both the middle and high school levels and is a participant in three lawsuits against the DOE and the City of New York. She has not been terminated and believes that has something to do with one of her lawsuits.

At the time of the mandate, she was pregnant with her second daughter and did not feel the vaccination was a good idea.

Leah, who preferred not to use her last name, was a paraprofessional who worked one-on-one with first graders with special needs at an elementary school in Brooklyn.

She did not take the vaccination for religious reasons and filed for a religious exemption. “It contradicts my faith,” she told The Epoch Times.

Leah applied for a religious exemption last fall and was denied. She appealed and was denied again, with the section “date of hearing” left blank.

After a second appeal, she was denied yet again with the reason being “hardship to the employer.”

“Quite honestly, it breaks my heart on multiple levels,” she said. “I love my job; I love working with my students.”

Leah said she was instructed to ignore any communications that may come from students or their families. She’s received text messages and calls to which she cannot reply.

“My heart hurts because these children were part of our family,” she said.

“It’s heartbreaking to have such a large portion of your life stolen from you because you’re standing firm in your convictions.

The four lawsuits are ongoing but, for now, the teachers and other professionals remain unemployed.