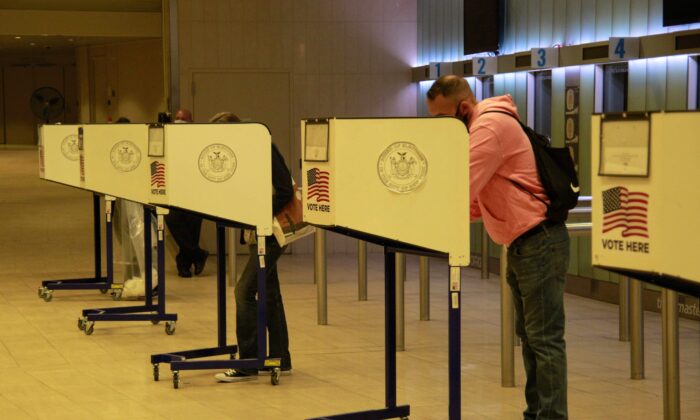 The Democrat-led New York City Council on Thursday voted to pass an ordinance that allows non-citizens to vote in City Council races and other municipal elections starting in 2023.

If the bill is signed by the mayor and if it survives lawsuits, New York City would become the largest city in the United States to grant access to polls for people who aren’t American citizens. About 800,000 non-citizens live in the city. Noncitizens cannot vote in statewide or federal elections.

“I am proud to be voting on legislation that will give the right to vote to green card holders and people who are authorized to work in the United States of America,” Council Speaker Corey Johnson said ahead of the vote earlier this week.

“Immigrants pay taxes,” he said. “They use city services. Their kids go to our public schools. They are part of our community, and they deserve a say in local government.”

The measure, which passed 33-to-14, is just short of a two-thirds majority, which is veto-proof.

Republicans and some Democrats opposed the measure. Some argued that the bill’s 30-day residency requirement to vote is too short.

“We pledge action, legal or otherwise, any means necessary to stop this dangerous legislation from undermining our elections,” New York GOP Chairman Nick Langworthy told news outlets last week, arguing that it will “allow foreign powers” to have the “ability to influence U.S. elections.”

Republican National Committee Chair Ronna McDaniel, in a statement, said that with the passage of the bill, “American citizens should decide American elections—full stop.”

“Today’s decision in New York is the product of a radical, power-hungry Democrat Party that will stop at nothing to undermine election integrity,” McDaniel said.

“This particular legislation is going to shift the power dynamics in NYC in a major way, and we do not have the numbers or the information to know how that is going to impact African-American communities,” Cumbo said, reported FOX 5.

New York City Mayor Bill de Blasio, a Democrat, previously said he opposes the bill. It’s not clear if he will veto it.

“In the end, I want to make sure that citizenship, which people work so hard to achieve, is valued and is given its full weight,” he said in an interview with NY1 in late November.

According to a Reuters analysis, at least 14 U.S. cities, including San Francisco, already allow non-citizens to vote in municipal elections.