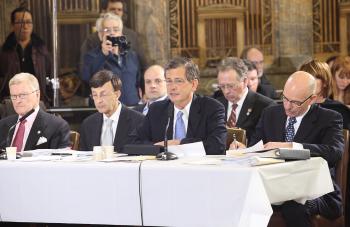 Tara MacIsaac
Tara MacIsaac is an editor and reporter who has worked on a variety of topics over the course of her ten years with The Epoch Times, including science, the environment, and local New York news. She is currently working with The Epoch Times edition based in Southern California.
View profile
Follow
biggersmaller
Print
NEW YORK—With another 6 to 12 inches of snow forecast for Wednesday, the city is continuing to come to terms with the slow blizzard response that left at least three dead three weeks ago.

On Monday, the City Council questioned leading city officials involved in the blizzard 2010 cleanup at a hearing and Mayor Michael Bloomberg released a 15-point action plan on how the city can prepare for future blizzards.

Though Bloomberg was not present at Monday’s hearing, representatives of the relevant departments in his administration offered their apologies, while explaining their actions during the storm and in the days that followed.

“We owe you and all New Yorkers for that lack of performance our administration’s apology and my personal promise not to let it happen again," declared Stephen Goldsmith, deputy mayor for Operations.

The officials also laid out the changes to take place in their respective agencies.

“As we examine the problems associated with responding to the storm I believe we will find out that there were systematic failures across several agencies and that not one person, not that just one person is to blame,” noted Councilwoman Elizabeth Crowley.

Still, a few fingers got pointed.

Councilman Jumaane Williams drew a parallel between Marie Antoinette and Mayor Bloomberg.
When the French people had no bread to eat in the 18th century, Queen Marie Antoinette supposedly said, “Let them eat cake.” While New Yorkers missed days of work, sustained damage to their property, or waited hours for an ambulance, Mayor Michael Bloomberg suggested they take in a Broadway show and get a cup of hot cocoa, according to Williams.

Councilwoman Letitia James assured those gathered for the hearing that in spite of the “perceived indifference of the administration … this will not turn into a public flogging.”

WHERE THEY WENT WRONG

The delayed ambulances had the most devastating effect on the city, with several people dying while EMS workers were stuck in the snow and the 911-call log was backed up—as many as 1,400 calls were backlogged Dec. 27.

Not only was it a problem of over 100 ambulances being stuck and mechanically damaged, explained Fire Commissioner Salvatore Cassano, but also the call volume was unusually high. Typically, EMS receives about 3,300 calls a day. On Monday, Dec. 27, 4,662 calls flooded in at a rate of 200 calls an hour. Cassano says 911 was blocked up by calls that were not urgent, making it more difficult to address the calls that were matters of life and death.

Ambulances will now have flat chains for the tires. The tire chain technology has changed, noted Cassano, since FDNY stopped using chains because they caused severe vehicle damage when they broke. The new chains are designed to avoid this issue. Sled-like apparatus for transporting patients will now be placed in EMS vehicles.

“Why wasn’t a state of snow emergency called?” Speaker Christine Quinn demanded of the panel more than once, insisting on a crystal-clear answer.

Goldsmith explained that when a snow emergency is called, all cars must be removed from the designated snow routes. The administration feared the movement of many cars to parking on secondary routes would lead to more chaos and stuck cars. In retrospect, however, he admitted calling a state of emergency may have mobilized the various city agencies more quickly and might have prevented more people from getting out on the road through the course of the storm.

“During severe weather, officials face difficult judgment calls about whether to disrupt the lives of the public in anticipation of an event of ultimately uncertain merit,” stated Goldsmith.

Though the storm was forecast in the days before it hit, it was not until 4 p.m. on Dec. 25 that a blizzard warning was issued, explained the panel of witnesses. Initially, the city was looking at a few inches of snow, then about 6 to 8 inches, and finally the blizzard warning brought with it an estimate of 16 inches—still short of the 20 inches that actually fell. The severity of the blizzard surpassed expectations, pleaded the panel.

The cooperation of various city agencies was not up to par, the hearing found. Speaker Quinn insisted that Office of Emergency Management (OEM) Commissioner Joe Bruno, should call together the various agencies under the OEM sooner than an hour before the expected snowfall begins.

Goldsmith observed that private resources were not gathered in a large enough force to combat the blizzard. He said the city will create a better Rolodex of private companies to be alerted and on call in the future. Day laborers were discouraged when they called 311 and got a message saying they would not be paid for 6-12 weeks. The payment structure must be altered, said Goldsmith to encourage as many hands on board as possible.

Internal and external communication was an issue: Only one radio channel was used for all sanitation workers in a borough, explained Department of Sanitation Commissioner John Doherty. It was over-saturated and could not get vital information about disabled vehicles, or about the on-the-ground situation to those in charge. After the success of a pilot program of 50 GPS phones in sanitation vehicles, the city will go ahead with procuring these devices for all 1,700 vehicles citywide.

A page will now be available on the nyc.gov website with maps, alerts, and more information for public access.

Information will be provided on the City Council website for public hearings concerning the storm cleanup in the weeks to come. On Friday, the council will meet with MTA officials to address that agency's response to the blizzard.