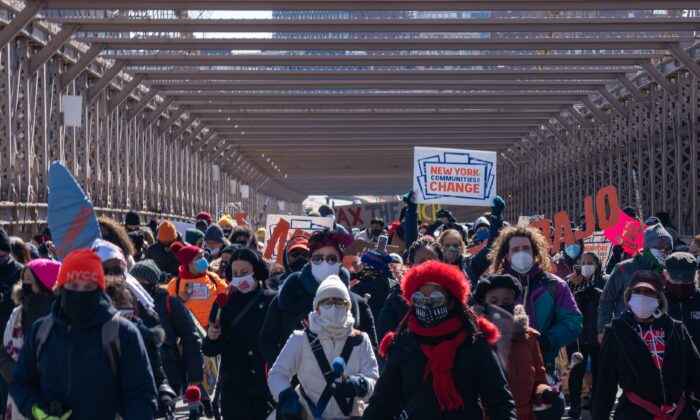 New York state legislators this week agreed to establish a $2.1 billion fund that will give money to illegal immigrants and other so-called excluded workers who lost their jobs during the COVID-19 pandemic but were ineligible for federal stimulus checks, unemployment aid, or other benefits.

The Excluded Worker Fund will extend a one-time payment to workers who lost jobs or income during the pandemic.

“During the COVID-19 pandemic, essential workers across the state risked their lives to keep our state moving and our families safe,” Assembly Speaker Carl Heastie, a Democrat, said in a statement. “When unemployment rates skyrocketed last summer, many of those selfless workers were excluded from any type of federal assistance during this pandemic and we must take care of all New Yorkers.”

People can receive up to $15,600 total; taxes will be deducted before they receive the money. Workers won’t be eligible unless they were making less than $26,208 in the 12 months prior to the bill taking effect and unless they can prove they can still work. People must show a valid taxpayer number and a letter from an employer, along with other papers, to get the maximum payments.

People who can’t meet the more stringent documentation requirements can still receive a $3,200 payment, provided they prove their identity and residency.

Approximately 290,000 people will get money from the fund, according to the Fiscal Policy Institute.

Illegal immigrants and supporters engaged in a weekslong hunger strike to push for the inclusion of the fund in the state’s budget. The community group Persist Brooklyn shared a story with state lawmakers during a recent public hearing about Ana, a pseudonym, a Honduran mother who entered the United States from Mexico in early 2020.

Ana was denied asylum and, during the pandemic, “lost what meager profits she was making selling goods in the street,” Cole Edick of Persist Brooklyn told lawmakers.

“Pursuing asylum should be Ana’s right, not a privilege reserved only for those who can pay for it. But because this government has not yet found the courage to ensure the basic needs of people like Ana during a national crisis, she has had to put her rights on hold,” he added.

California established a similar fund in February, giving a one-time $600 or $1,200 payment to illegal immigrants.

The Excluded Worker Fund was ultimately included in New York’s record $212 billion 2021-2022 budget, which will be financed with funds from the federal government and higher taxes on the wealthy and large corporations.

Gov. Andrew Cuomo, a Democrat, pushed for the eligibility restrictions.

“Just because you are undocumented doesn’t mean we don’t care and we don’t have compassion and we don’t want to help. It is difficult to do it in a way that can be administered without fraud. And that’s obviously a major concern for us, that we protect every tax dollar. We ran an unemployment insurance program for citizens of the state. There was tremendous fraud,” Cuomo told reporters in Albany on April 7.

“The assertion that some of … my neighbors are just waiting for the opportunity to commit fraud is disgusting,” Assemblywoman Catalina Cruz, a Democrat, told reporters.

New York Attorney General Letitia James, a Democrat, said her office would verify whether the regulations and the process being established by the fund are constitutional.

“Despite having $22 billion more in funds available over the next two years than when the governor proposed the budget in January, leaders agreed to raise personal income and business taxes and to use some portion of federal funds to inflate spending that likely cannot be supported in the out-years,” Citizens Budget Commission President Andrew Rein said in a statement. “The tax increases simply are unnecessary and economically risky.”

New York Senate Majority Leader Andrea Stewart-Cousins said that she was proud that the budget will fund schools, help businesses rebuild, and protect the state’s “most vulnerable.”

“Working and middle-class taxpayers will receive the relief they desperately need, while the wealthiest New Yorkers will help their neighbors. This budget makes New York better for all,” she said.

But Republicans criticized major portions of the budget.

“Rather than helping families, veterans, teachers, and senior citizens, the Democrats in Albany have made it their priority to push their radical agenda by giving a $2.1 billion taxpayer giveaway to illegal immigrants,” Senate Minority Leader Robert Ortt said in a video message. “Instead of giving people a reason to remain here in our state, this budget drives ever more families, seniors, and young New Yorkers away.

“Instead of helping Main Street businesses recover from the pandemic, this budget increases taxes on our small businesses and makes it even more difficult for them to survive.”