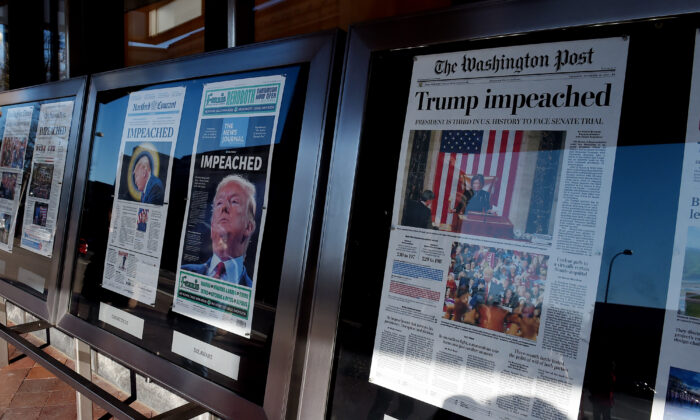 Newspaper front pages are on display at the Newseum in Washington on Dec. 19, 2019. Olivier Douliery/AFP via Getty Images
Viewpoints

Ever since Donald Trump declared for the presidency, the mainstream media—apparently to protect us and themselves from the dreaded Donald (even though his candidacy and presidency were enriching many of them as never before)—have given themselves permission to lie about and/or distort and/or exaggerate almost everything they say about the president.

We all know why this has happened, but how does it work? It’s not that complicated. Shakespeare spoke of the “lie circumstantial” and the “lie direct” in Touchstone’s magnificent speech in “As You Like It,” but a more contemporary version might be the “lie iPhoned” or more simply “the leak.”

The leak is the mother of most of today’s journalistic malfeasance, especially for anything political, and why the public, according to so many polls, has little respect for the press.

What is the reporter then thinking? Is the info true? Well, maybe in some cases. More likely, is it true enough? Can I sell it? Can I make it sound true? And is it a scoop and if so, more importantly, what side is it on? Whose ox will be gored? Will it satisfy my reader/viewership and will my boss approve? (Or, as Dean Baquet, executive editor of The New York Times, put it, “We wrote a lot about Russia and I have no regrets. It’s not our job to determine whether or not there was illegality.”) And, best of all, is there a Pulitzer in it for moi? (No matter that several recent Pulitzers were shown to be premised on lies that undoubtedly arrived via leaks. They’re not taken back.)

If all these boxes are checked, and especially if the ox that gets gored is Donald Trump or someone close to him, even remotely, step two occurs. Corroborating evidence is sought from other sources.

As with the first step, these sources will almost always be anonymous and referred to in the text as “a source close to …” (whatever or whoever it is) or “someone in a position to know …” and so forth.

Most newspapers supposedly require a certain number of these corroborating sources before they run an article, but who knows if they really do, because they are … anonymous?

This leaking—whether factual, a lie, or, as is often the case, a combination of the two—is, of course, illegal, but the leakers are rarely if ever prosecuted, despite promises from the Justice Department and others. The journalists who rely on the leakers are a protected class of their own and are at little risk for printing what they wish. They rarely, with only a handful of exceptions, pay a penalty for promulgating lies or half-truths, creating a perfect pas de deux of corruption.

Nevertheless, this is the essence of the bulk of modern political journalism—a far cry from the police blotter of yore or the “who, what, why, when, where, and how” of the pre-Watergate days. Journalism then was not so high and mighty, and you could still pick up a newspaper with at least some certainty that you weren’t about to be propagandized.

Isn’t it time we went back to those old days for the new year?

What about a resolution never to run an article based on or even containing anonymous sources?

Plenty of other possible resolutions exist for the errant journalistic class, but at least that’s a start. One step at a time, as they say. Unwinding this situation won’t be easy. We’re all biased humans, after all. But if some of us try, others may follow.