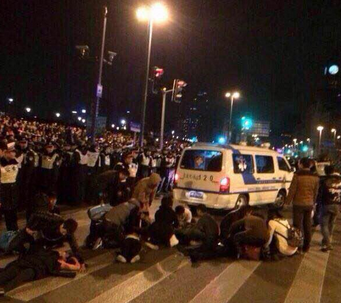 A New Year’s Eve stampede has killed 35 people in Shanghai, according to Chinese state media.

Officials say at least 35 people have been killed at the New Year event in Chenyi Square on the Bund in the Huangpu district.

Another 42 people were injured, according to initial reports. The injured persons were taken to the No. 1 People’s Hospital of Shanghai.

A picture published by Xinhua showed police lined up around the event, trying to calm people down and restore order.  Multiple people lay on the ground in the picture, seemingly dead or injured. Others gathered beside them.

Other pictures posted by social media users showed more gruesome scenes from the area. The “crush” broke out at approximately 11:35 p.m. local time. It’s unclear what sparked the stampede.

Shanghai, stampede at the Bund, Shanghai. Some are injured. pic.twitter.com/OQZ7pY7fWp

“As a native of Shanghai, I believe this is the worst (very rare) stampede incident in Shanghai history in recent decades. Shock!!” he said via Twitter.

The situation happened just before midnight when huge crowds of people gathered at Bund for the New Year countdown.

Instead, revelers were allowed to experience a toned down version of the event in several different locations in the city. But the stampede happened in one of the areas, near where the original display was set to take place.

The China Daily newspaper in February reported that the city’s population was more than 24 million at the end of 2013.