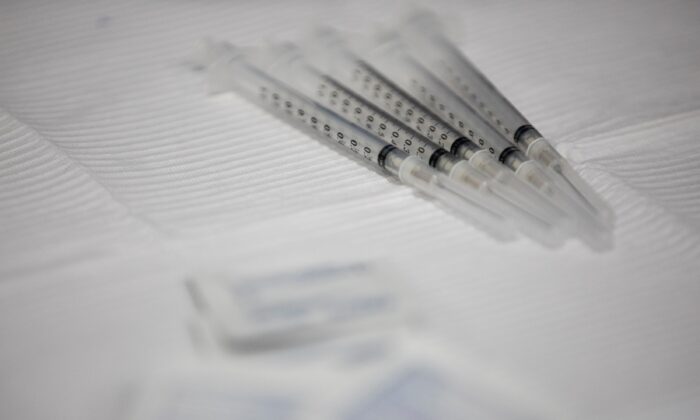 Syringes filled with the Pfizer-BioNTech vaccine sit on table during vaccine clinic in Southfield, Mich., on Sept. 29, 2021. (Emily Elconin/Reuters)
Viewpoints

New scientific findings in the prestigious Lancet Infectious Diseases journal blow a hole in the argument that workers need to get vaccinated to protect those around them. The findings prove the foolishness of forcing police and other public employees to get vaccinated or lose their pay. And President Joe Biden should retract his order to the Occupational Safety and Health Administration to compel large employers to mandate vaccines.

The journal reported on Nov. 4 that COVID-19 vaccines have a “minimal” impact on preventing transmission of the delta strain. Delta is the COVID-19 strain currently causing more than 99 percent of U.S. cases.

Vaccines protect the people getting the shots from serious illness, but they don’t stop the delta variant from spreading to others.

Don’t get me wrong. Americans should choose to get vaccinated. The keyword is “choose.” Though shots are no guarantee against getting infected and spreading it to others, they provide significant protection (90 percent or more) against hospitalization and death. I’m triple-vaccinated.

Choosing not to get vaccinated is choosing to risk your own life. The health risk to others is minimal.

Most vaccines—against polio, smallpox, measles, and other diseases—prevent infection and spread. But not COVID-19 vaccines. Now that the battle is against the delta variant, they’ve become disease-tamers rather than infection preventers.

Tell that to Mayor Bill de Blasio, who gave New York employees until Nov. 8 to get at least one dose or be sent home without pay. As of Nov. 1, 9,000 were on unpaid leave because they have refused the vaccines. Twenty FDNY companies were shuttered because many of New York’s bravest refuse the vaccine. Police Commissioner Dermot Shea claims the mandate will not further diminish the number of New York’s finest on the street. That remains to be seen.

Governors and mayors from Maine to Los Angeles are demanding that public employees, and even nurses and doctors, hailed just months ago as heroes, get vaccinated or go without a job.

Sorry, Governor, but you don’t know what you’re talking about.

Just as politicians don’t read the bills before voting on them, they don’t keep up with science, but still want to tell the rest of us what to do.

The groundbreaking findings in Lancet show that fully vaccinated people who came down with COVID-19 infected others in their household at the same rate (about 25 percent) as unvaccinated people did (about 23 percent). The vaccinated had just as much viral load in their upper respiratory tract, making them just as contagious.

“Our findings show that vaccination alone is not enough to prevent people from being infected with the delta variant and spreading it,” study co-author Ajit Lalvani said.

One thing is for sure: The science is uncertain on this. So, government should not be using a heavy hand to impose mandates claiming to make workplaces safer.

Meanwhile, the White House is pressing large companies to mandate vaccinations and calling on OSHA to enforce that policy with hefty penalties. The Build Back Better bill increases the penalties tenfold to as much as $700,000 per incident for hazardous conditions, threatening bankruptcy for all but the largest enterprises. The Biden administration expects to publish the rules in the Federal Register in the coming days, affecting about two-thirds of the private sector workforce.

Yet the new science undercuts OSHA’s claim that unvaccinated people are a workplace hazard. So far, workplace mandates have been challenged at least 39 times in federal courts with little success, but the new scientific evidence may change that.

Lancet Infectious Diseases stressed the urgency of improving current vaccines or developing new ones to actually “protect against asymptomatic infections and onward transmission.”

Foolishly, the Biden administration and Democrats in Congress vilify the vaccine developer Moderna for making a profit and threaten to seize its patents. It’s possible COVID-19 will continue morphing into new variants, requiring new vaccines from companies such as Moderna.

When you’re fighting a war—in this case, against a killer disease—attacking your own ammunitions maker is no way to win it.