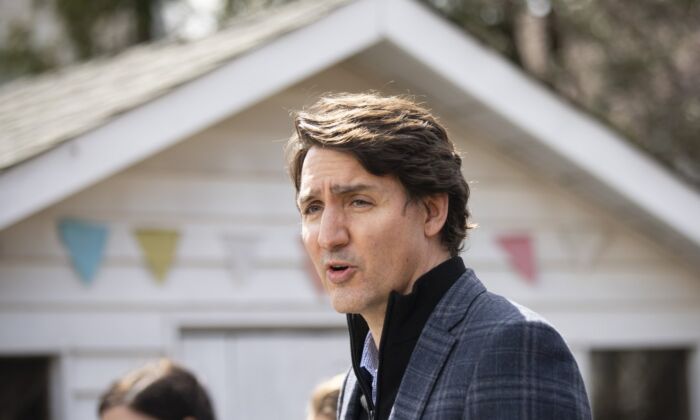 Prime Minister Justin Trudeau speaks about Budget 2022 highlights on housing investments from a podium in a backyard in Hamilton, April 8, 2022. (The Canadian Press/Peter Power)
Canada

Investments in new tools for Canada’s security agencies to deal with “extremist ideology” and “misinformation” are being made by the government, Prime Minister Justin Trudeau says.

“We need new tools to fight all of these pending threats, and that’s why we’ve turned to all of our security agencies to look at new ways of ensuring peoples’ safety,” Trudeau said in French while addressing media in Vancouver on May 24.

“Because, as we know, what happens in the virtual world has impact in the real world. It doesn’t stay on the internet.”

Trudeau said the measures are needed to counter the “new threats weighing on our society and our country,” citing the rise of “misinformation” and “disinformation,” and social media being “weaponized” by foreign actors and domestic extremists.

“Whether it’s extremist ideology and right-wing terrorism on the rise in Canada, or whether it’s examples like the illegal [Freedom Convoy] protests we saw in the winter, there are a whole new set of challenges that we need to be responding to,” Trudeau said.

The prime minister said this would be done in a way that protects freedom of speech and protest.

“While at the same time, we’re taking on more tools to keep Canadians safe.”

The Liberal government invoked the Emergencies Act on Feb. 14 to deal with the trucker-led Freedom Convoy protest in Ottawa and related border blockades, with protestors demanding the lifting of COVID-19 mandates and restrictions.

Throughout the three weeks of protests, there was very little violence reported on the part of protesters. On one occasion a large vehicle painted in camouflage broke through a police barricade in Surrey, B.C. The RCMP also made a seizure of firearms and several pre-emptive arrests near the border blockade in Coutts, Alberta, with some individuals being charged with conspiracy to commit murder and other weapons charges.

The remaining protesters at Coutts dispersed voluntarily after arrests were made, in order to not be associated with that event.

Public Safety Minister Marco Mendicino said there were links between the individuals arrested in Coutts and the protest organizers in Ottawa, but didn’t publicly substantiate the claim.

Many other claims made by the government and Liberal MPs surrounding the Freedom Convoy have since been unsubstantiated or debunked, such as that protesters were behind an apartment arson, that they made threats of sexual assault, that they were in possession of loaded firearms, or that they were bankrolled by Russia.

A serious violent incident unrelated to the convoy took place at the same time as the protests on Feb. 17, when the Coastal Gas Link operation in B.C. was attacked by reportedly axe-wielding assailants which caused millions in damages.

In addition, dozens of churches in Canada were attacked in politically-motivated arsons last summer around the issue of unmarked graves found at residential schools.

Trudeau didn’t make a reference to these incidents in his comments about developing threats on May 24.

While not specifying which new tools are being invested in or adopted, Trudeau said the government is “working closely with organizations like the Canadian Security Establishment [CSE] around communications.”

This focus on the information space suggests some computer-assisted collection and analytic capability to gather data from social media and identify potential threats using keywords and algorithms.

CSE is not allowed to collect information on Canadians, but its technical expertise can be leveraged by other security agencies. The eavesdropping agency has also been releasing information on its Twitter feed in recent months to counter Russian disinformation, saying the tweets are based on its collected intelligence.

The Epoch Times inquired with Public Safety Canada about what security investments are being made and which tools are being developed, but they didn’t provide a response by the deadline.