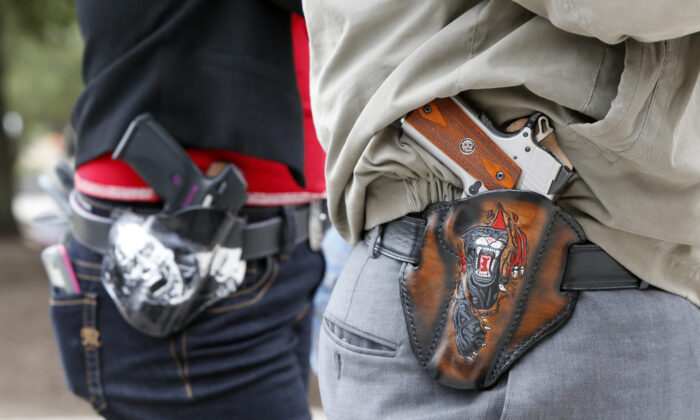 Texas on Wednesday became the latest state to allow individuals to carry a gun without a permit.

That means that Texans who are aged 21 and older and who are legally able to purchase and own a handgun will no longer need a license to carry one. No training is required, either.

The bill was signed into law in mid-June by Gov. Greg Abbott, a Republican, after GOP state lawmakers argued that the previous permit requirement had restricted Texans’ right to bear arms under the Second Amendment of the Constitution.

“This bill, to me, is a restoration of the belief in and trust of our citizens,” said Republican Texas Sen. Charles Schwertner, a sponsor of the bill. “If you possess a firearm, you should be able to carry a firearm.”

This year, Utah, Montana, Wyoming, Iowa, and Tennessee have passed similar bills allowing permitless carry in the face of federal pressure to implement more gun-control measures in the wake of several highly publicized mass shootings in Colorado and Atlanta. Several Democrat members of Congress similarly introduced bills, including one that would ban the ownership of more than 200 “assault weapons,” mandate universal background checks, and ban magazines that hold more than 10 rounds.

“Constitutional carry is simply the state acknowledging your personal right to carry a firearm, but they’re requiring you to do all your own homework, know what the laws are, where you can carry, where you can’t. And the penalties for doing something wrong or making a mistake are pretty stiff—much different than if you had a license to carry,” Danny Garcia, a gun safety instructor at the Texas-based Sharp Shooter, told KRIS-TV.

“It’s reasonable and important to ask that someone carrying a firearm in public know how to safely handle and store a gun and have a basic awareness of the laws related to weapons and the use of deadly force,” Chacon said, according to KVUE. “Stripping away those safeguards will make our streets less safe, and they will make law enforcement’s jobs harder.”

According to the law’s provisions, there are restrictions on where one can carry a firearm, including schools, bars, polling places, airports, sports events, government offices, jails and prisons, hospitals, federal property, National Park buildings, and private businesses that post signs.