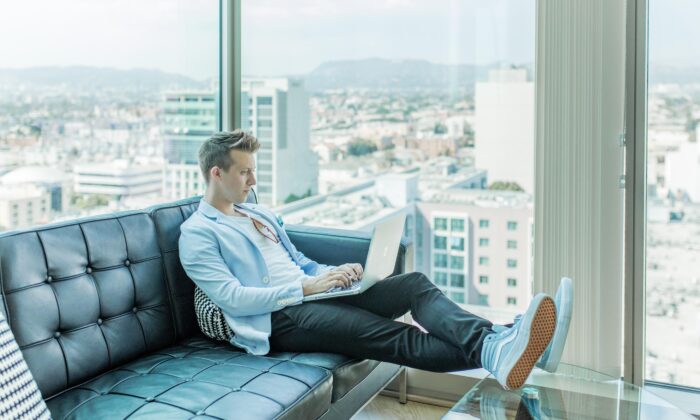 The Federal Reserve Bank of New York released the results of a new labor survey on Thursday, attesting that many of the remote work opportunities that opened up during the pandemic have remained and are expected to remain into the future, even as skeptics question whether remote employees are as productive as in-person professional workers.

The Fed’s New York branch published an analysis of the results of its August regional business surveys, particularly focusing on the questions concerning remote work.

The survey followed up on a similar study conducted last summer, which found that service firms saw more than 30 percent of work conducted remotely, as of June 2021. This month saw that number decline to just over 20 percent—a major decline, but still markedly higher than pre-pandemic levels, when less than 10 percent of work was done remotely. The authors of this analysis concluded that remote work would decline only slightly by next summer, as many of the fears and restrictions which had driven remote work during the pandemic have subsided, even as remote work remains strong and robust.

“While the amount of remote work conducted among regional businesses has declined over the past year, it remains well above pre-pandemic levels … Looking ahead, this level of remote working is expected to decline only modestly, and only among service firms,” the authors concluded.

While remote work had become more prevalent throughout the 2010s, the practice became massively popular by necessity during the lockdowns which ensued after the COVID-19 pandemic hit in the spring of 2020.

For employees, the benefits of remote work are obvious: By taking away the onerous and sometimes costly process of having to commute to work, remote employment can help workers save time and money. For these reasons, many employees who have grown comfortable with remote work may find a return to brick-and-mortar offices unappealing, even as their supervisors lament the situation.

However, therein lies the problem for employers: With less direct in-office supervision, remote employees may be less productive and more difficult to manage than their in-person counterparts.

For employees, there is at least one major downside: Remote workers may be less likely to receive promotions, assignments, and other benefits, and may be more likely to be laid off. Sixty-seven percent of business owners admit that they view remote workers as more expendable than in-person workers, according to a survey conducted last year by the Society for Human Resource Management.

Laszlo Bock, Google’s former chief of Human Resources, for example, has expressed his confidence that remote work will gradually fade away, largely on account of the disadvantages remote employees have concerning promotions and assignments. “There will be some gamesmanship driving them back to the office as well,” Bock said in an interview, elaborating upon the reasons he believes remote work will fade away in a gradual “boil the frog” transition to normalcy.

However, in the view of the authors of the New York Federal Reserve employment analysis, remote work will likely remain common for the foreseeable future. As supervisors and employees continue to butt heads over competing preferences, only time will tell which prediction will be vindicated in the uncharted waters of the post-pandemic economy.