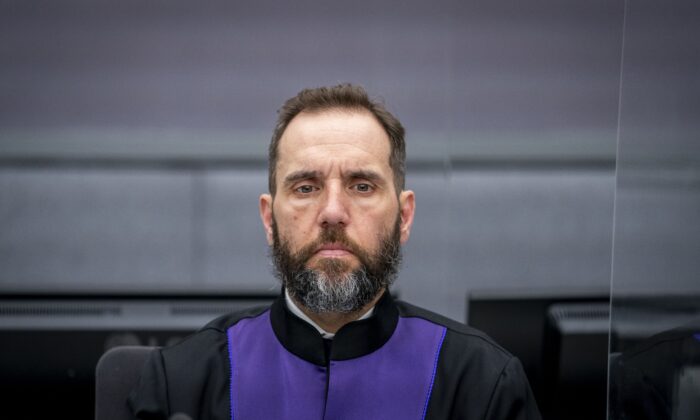 American prosecutor Jack Smith presides during a presentation before a war crimes court in The Hague on Nov. 9, 2020. (Jerry Lampen/Pool/AFP via Getty Images)
By Zachary Stieber

Newly appointed special counsel Jack Smith, in a Nov. 24 letter to a federal appeals court, challenged an assertion by lawyers for former President Donald Trump in a classified-documents case.

It was Smith’s first public move since being tasked with leading the investigation into whether the former president violated the Espionage Act and other federal laws with Trump’s handling of certain records, including records with classified markings.

The assertion by Trump’s attorneys is “incorrect,” Smith said in a one-page letter to the U.S. Court of Appeals for the 11th Circuit. He was responding to Trump’s attorneys, who had invoked a case that involves materials seized from Rudy Giuliani, the former New York mayor who had served as Trump’s lawyer.

James Trusty, one of the lawyers, said the approach backed by the government in the Giuliani case was a reference for the Trump records case.

“The question raised was whether a court has previously asserted equitable jurisdiction to enjoin the government from using seized materials in an investigation pending review by a special master. The answer is yes,” Trusty said in a supplemental filing after the parties offered oral arguments during a court hearing.

In the Giuliani case, none of the materials were utilized in the investigation until the special master process was completed.

“The process worked. On November 14, 2022, the United States filed a letter brief notifying the District Court that criminal charges were not forthcoming and requested the termination of the appointment of the special master,” Trusty said.

“As plaintiff recognizes, the court did not ‘enjoin the government,’ id.; instead, the government itself volunteered that approach,” he said in the brief. “Moreover, the records there were seized from an attorney’s office, the review was conducted on a rolling basis, and the case did not involve a separate civil proceeding invoking a district court’s anomalous jurisdiction.

“None of those is true here.”

The competing briefs come after a panel of the U.S. Court of Appeals for the 11th Circuit heard from both sides on Nov. 22 regarding the government’s motion to remove U.S. District Judge Raymond Dearie as special master.

The appeals court panel hasn’t yet ruled on that motion.

Dearie, a Reagan appointee who was appointed by U.S. District Judge Aileen Cannon, a Trump appointee, is currently scheduled to complete his review of the seized records in December. The FBI seized the records from Mar-a-Lago, Trump’s residence in Florida, in August while executing a search warrant.

Smith was supposed to immediately return to the United States from The Hague, where he was working, but a bicycle crash means that he’ll remain overseas for the time being, the Department of Justice told media outlets after Garland’s appointment.

During the hearing, one of the appeals court judges asked the parties whether they were aware of any case, other than the case in question, where a federal court exercised what’s known as equitable jurisdiction—or the authority of the court to act in the interest of fairness—in a scenario before an indictment has been announced and without a showing that the seizure itself was unlawful.

“We have been unable to find a case in which that that has happened, Your Honor, and I don’t think plaintiff has identified one in his briefs either,” Sopan Joshi, a government lawyer, told the court.

“Not in the context of an immediate, fully formed motion that indicates that in fact, we know this to be an unconstitutional seizure,” Trusty said. “I agree with the court’s premise that there’s no case law. I would start with the broader premise, which is there’s also not a situation in the history of this country where a sitting president authorized [a] raid of a presidential candidate’s home.”

Government lawyers also said the part of Cannon’s ruling that enjoins the government from utilizing the disputed records in its investigation—except for the ones with classified markings—was wrong.

The injunction prevents the government from using “lawfully seized records per a lawful warrant,” Joshi said.

Cannon “should not have exercised jurisdiction over this case in the first place,” he said.

Trusty said Cannon’s ruling was proper because Trump couldn’t establish the raid was unlawful without access to the documents.

“This is a judge who’s giving us an opportunity to initially create a carve-out of limited equitable jurisdiction for us to explore whether or not there’s a valid claim,” Trusty said.

“The case could fizzle out” in several ways, but could also lead to a fresh claim of government overreach, he noted.

The parties diverged over their interpretation of whether Rule 41 of the Federal Rules of Civil Procedure enabled Cannon’s special master insertion.

That court already ruled in September that the government could resume using the materials with classified markings in its investigation and ordered that Trump and Dearie be prevented from seeing those materials.

FBI agents seized more than 11,000 materials without classified markings and about 100 records marked classified, according to an inventory filed with a federal court.