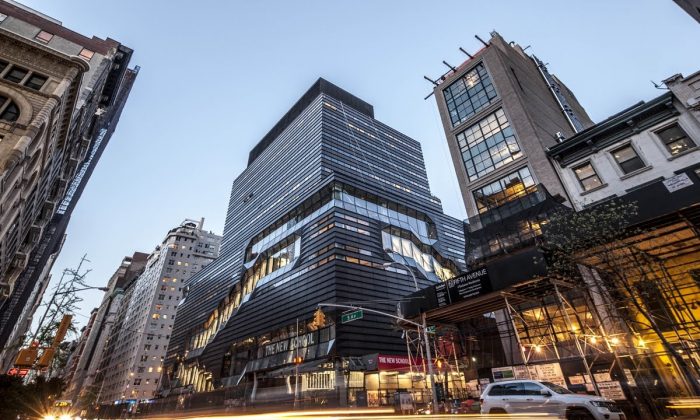 Elected officials and university staff held a ceremony to celebrate the occasion. Sarah Jessica Parker, whose brother Pippin Parker is the Director of The New School for Drama, was also present for the occasion.

“The university center is also public resource,” Parker said. “It’s a gift to the Village. The Tishman auditorium is one of downtown’s largest performance spaces and will offer educational and cultural programming that will engage the community.”

The University Center is located at one of the most prominent sites in the city at 14th Street and 5th Avenue, sandwiched between two historic districts: Ladies Mile and Greenwich village. Its avant-garde exterior, complete with ridged bronze walls and jagged glass panels, is unlike anything else in the neighborhood. Some students even speculate that it was designed to outshine 41 Cooper Square, the famous Cooper Union academic building.

The university also touted that the building is LEED gold certified, making it one of the greenest buildings in New York.

The building has two systems that help reduce its impact on the city’s electrical grid. It has an ice storage unit in the lower level that can be used to generate cold air in the summer when Con Edison grids are most taxed. It also has micro turbines on the 17th floor that produce up to 30 percent of the center’s electricity needs.

Designed by Skidmore, Owings & Merrill, the 16-story building houses a 600-bed student residence, a two level library, an 800-seat auditorium, classrooms, and plenty of open space. Leading architect Roger Duffy said that the building was designed to provide spaces for students to meet and interact with each other.

“The building we inaugurate today re-imagines the traditional campus type,” said Duffy. “It takes the tradition quad and disperses them vertically in the sky.”

The ‘vertical quads’ are connected by major staircases that can be seen from the glass windows from outside the building.

Former mayor Michael Bloomberg praised the building’s design when he visited in July last year, describing it as “spectacular.” He particularly appreciated the abundance of stairs in the building that encouraged students to exercise more as they travel between floors.

The New School does not have a central campus. Parsons, the New School’s prestigious design school, used to be located at 42nd street. The school was moved into the new building upon its completion. The construction of the university center is The New School’s first step towards consolidating the schools in the Greenwich Village.