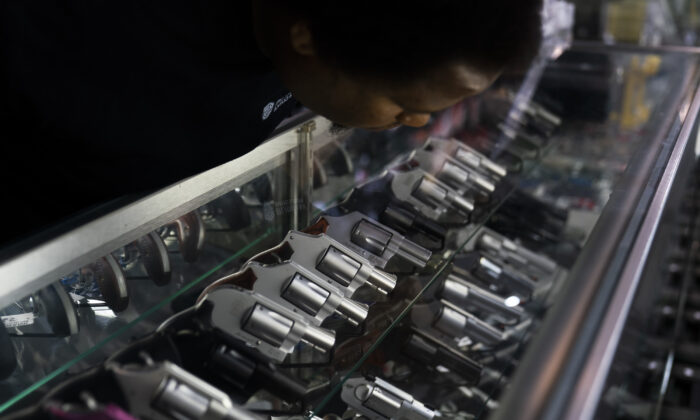 The FBI’s National Instant Criminal Background Check System (NICS) has implemented a new policy that seeks to collect the addresses of gun purchasers in a bid to comply with a new federal law.

Prior to the change, firearm dealers only had to provide a purchaser’s state of residence rather than their full address in cases of a denial or delay.

Last month’s change in policy is a result of President Joe Biden signing the appropriations package for fiscal 2022 in March. The package contained the Violence Against Women Act Reauthorization Act, which includes the NICS Denial Notification Act.

In an FBI email dated Sept. 22, obtained by Gun Owners of America, the agency details how the new policy will be implemented:

“The NICS Denial Notification Act of 2022 requires the FBI’s NICS Section to notify state, local, or tribal law enforcement of all FBI NICS denied transactions within 24 hours. The FBI must provide notification to law enforcement based upon the location of the FFL and if different, the purchaser’s address.”

The FFLs must provide a buyer’s complete address to the NICS as recorded on the Bureau of Alcohol, Tobacco, Firearms, and Explosives (ATF) Form 4473 when transactions are “denied or delayed,” the email reads.

“The address information will be required before the status can be provided or retrieved either by the NICS contracted call center or via the NICS E-Check,” the email states.

The FBI didn’t respond by press time to a request by The Epoch Times for comment.

Overreach by the FBI?

In a Sept. 26 statement, Michael Cargill, owner of the company, questioned the mandate requiring FFLs to record addresses of customers whose transactions are merely delayed, despite being ultimately approved for a firearm transaction.

Such a mandate wasn’t set forth in the law passed by Congress, he noted.

“Neither the ATF nor the FBI can act beyond the authority of Congress and violate the Constitution by furthering the ultimate goal of creating an illegal firearms owner database,” he said in the statement.

The FBI decision is the latest in a series of moves that gun owners say will curtail their rights. Last month, Visa announced it’s willing to join other credit card firms to tag firearm-related purchases. The National Rifle Association said Visa’s move is “eroding the rights of law-abiding Americans.”

According to a National Firearms Survey conducted last year by research firm Centiment, Americans own more than 415 million firearms. Given that the U.S. population is estimated to be about 333 million, that would mean there are 1.25 firearms for every U.S. citizen.