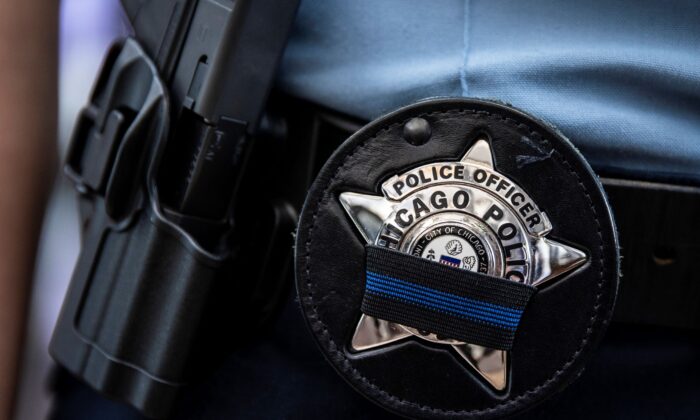 A Chicago police officer wears a blue and black band on her badge as she walks into the Leighton Criminal Courthouse to attend the bond hearings for two brothers charged after the fatal shooting of Chicago Police Officer Ella French in Chicago, on Aug. 10, 2021. (Ashlee Rezin/Chicago Sun-Times via AP)
Social Issues

One question asked participants their thoughts on a statement made by Rep. Cori Bush (D-Mo.) during a CBS interview last week. Bush said that “Defunding the police has to happen, we need to defund the police and put that money into social safety nets.” Sixty-three percent of respondents reported that they disagreed, with 51 percent reporting that they “strongly disagreed” with the statement. Another 31 percent said they agreed with Bush, with only 12 percent saying that they “strongly agreed” with the statement. The survey also showed that only 46 percent of Democrats agreed, indicating that “defund the police” rhetoric is divisive even within the Democratic party. Other political groups overwhelmingly rejected Bush’s statement, with only 23 percent of Republicans and 20 percent of independents expressing agreement.

Another question asked participants their thoughts on a statement made by the Sheriff Alan Cloninger of Gaston County, North Carolina. Cloninger, a lifelong Democrat, made national news after he announced in an interview this month that he was retiring from the police department and leaving the Democratic party. He explained his reasons for this, saying that “Some of the new Democrats in Washington attack and degrade all law enforcement officers who risk their lives every day to protect the people.” Fifty-seven percent of respondents reported agreeing with the statement, including 40 percent who “strongly agreed.” Thirty-one percent disagreed, including 21 percent who “strongly disagreed.” Another 11 percent were unsure. Of those, 44 percent of Democrats, 72 percent of Republicans, and 57 percent of independents agreed. Sixty-eight percent of minority respondents also expressed agreement with the quote.

Another question in the survey asked, “How do you rate the performance of the police in the area where you live?” The results showed that most Americans were overwhelmingly happy with the performance of their local police officers, as 71 percent rated their local police as “good” or “excellent”; only 25 percent responded that they did a “fair” or “poor” job. A large majority of every political and racial group surveyed reported “good” or better, including 57 percent of black voters.

Moreover, a majority (68 percent) of respondents also did not think that most police were racist, while only 18 percent did. Of these, majorities in every political group rejected the claim: 76 percent of Republicans, 60 percent of Democrats, and 69 percent of independents. The claim was also narrowly rejected by voters of every racial group surveyed: 73 percent of whites, 50 percent of blacks, and 63 percent of other minorities.

Anti-police rhetoric has divided the Democratic Party since the death of George Floyd. Progressives like Bush and Rep. Alexandria Ocasio-Cortez (D-N.Y.) have expressed support for the sentiment. But older and more moderate leaders like Rep. Jim Clyburn (D-S.C.) have expressed frustration with the movement. In an interview with Mehdi Hassan, Clyburn explained this frustration: “Defund the police is a non-starter even with black people. Defund the police has a chokehold around the Democratic Party … and nobody can call me anything but a progressive.” He then warned against “sloganeering,” saying that “in 1960, ‘burn, baby, burn’ destroyed our movement; ‘Defund the Police’ will do the same thing to progressive movements today. This kind of sloganeering does us no good.” Clyburn explained that others in the party have expressed similar sentiments, saying that “plenty of Democrats tell me ‘Defund the Police is a problem.’”

This new survey indicates that Clyburn and other moderates are correct that anti-police sentiment—especially defunding police departments—is overwhelmingly unpopular with Americans across most political and ethnic groups.