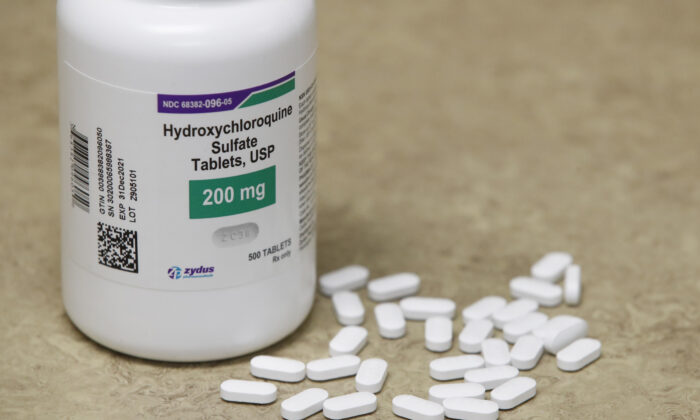 A bottle and pills of hydroxychloroquine sit on a counter at Rock Canyon Pharmacy in Provo, Utah, on May 20, 2020. (George Frey/AFP via Getty Images)
Expert View

Early Use of Zinc, Hydroxychloroquine Linked to Fewer Hospitalizations

A new study has reported that the early use of zinc together with a low dose hydroxychloroquine and azithromycin is associated with five times fewer hospitalizations in COVID-19 patients.

The research was released July 15 examined 141 COVID-19 patients who had severe acute respiratory syndrome coronavirus 2 (SARS-CoV-2) infections in the year 2020 who were treated with the triple therapy.

Results were compared to data analyzed from 377 COVID-19 outpatients with SARS-CoV-2 infection from the same community in New York State who did not receive the triple therapy treatment.

Patients, who were all white, had a median age of 58 and were treated with triple therapy for five days, which doctors said was well-tolerated by patients and resulted in a significantly lower hospitalization rate with no reported cardiac side effects compared with relevant public reference data of untreated patients.

Risk stratification-based treatment of COVID-19 outpatients as early as possible after symptom onset with the used triple therapy, including the combination of zinc with low dose hydroxychloroquine, was associated with significantly fewer hospitalizations, researchers said.

“The magnitude of the results can substantially elevate the relevance of early use, low dose hydroxychloroquine, especially in combination with zinc,” Scholz explained.

The three affordable medications work in synergy against COVID-19, with hydroxychloroquine allowing zinc to enter the cell, which then “kills” the virus. Azithromycin prevents secondary bacterial infection in the lungs and reduces the risk of pulmonary complications.

Derwand noted the importance of treating any patient with an infectious disease “as soon as possible.”

He said: “What differentiates this study is that patients were prescribed these medications early, in the outpatient setting. Dr. Zelenko treated his risk stratified patients immediately and didn’t wait for the disease to intensify.

“It’s unfortunate much of the news coverage surrounding hydroxychloroquine has been negative,” Zelenko added. “This study suggests that when taken early and together with zinc and azithromycin, this cost-effective drug can be part of the solution to the pandemic.”

The study was a retrospective study of existing data, which researchers said brought limitations to the results as the study design was not randomized and that treatments could not be controlled with blind testing. “Confounding factors and selection bias, among other issues, do exist,” the authors said.

They urged the medical community to work on designing studies in the primary care setting to allow for more rigorous study designs given the lack of available general clinical data of COVID-19 outpatients, which limited this study.