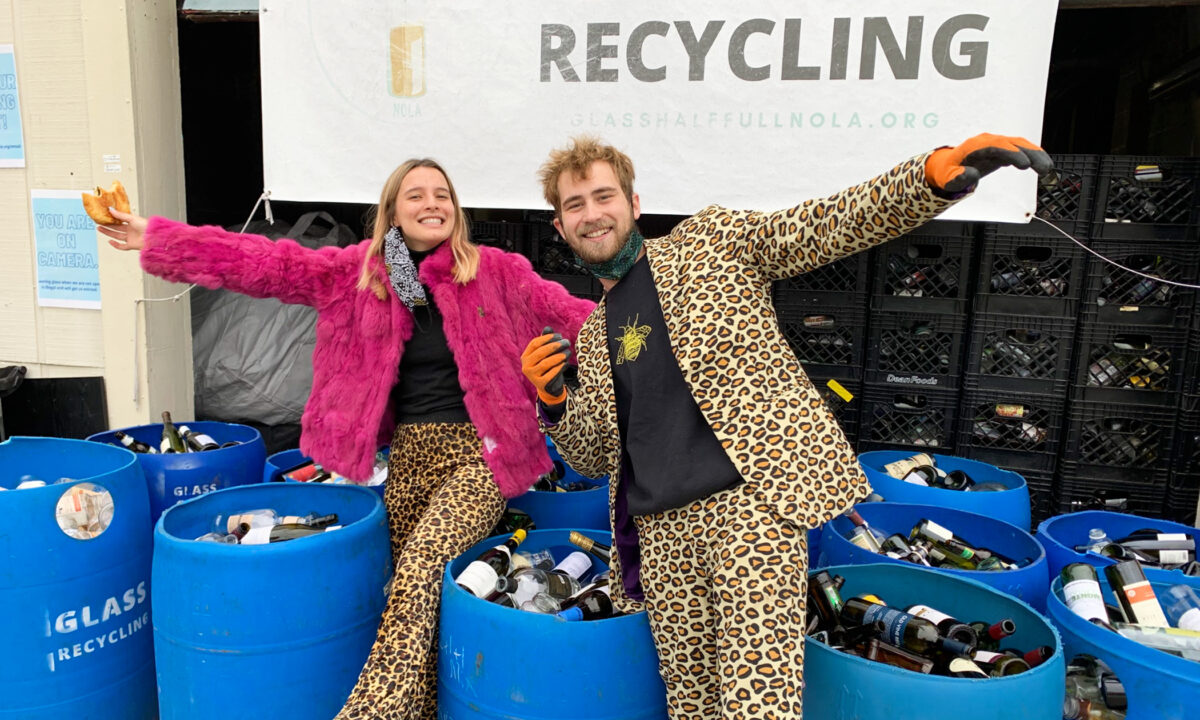 A startup company in New Orleans has been making headlines for its genius approach to recycling glass into sand.

Franziska Trautmann, 24, was a college senior at Tulane University when she was frustrated seeing glass going into landfill. Wanting to do something about the issue, she and Max Steitz began to recycle glass in the spring of 2020 from their inner backyard.

However, at that time, they weren’t aware that this simple yet brilliant idea would become so popular in the community.

After co-founding Glass Half Full in the spring of 2020, the young pioneer and her team have so far recycled almost 2 million pounds of glass. What started as a small backyard enterprise has now grown into a massive warehouse operation that has earned tons of love and support.

“The New Orleans community was really excited about the idea and supported us through a GoFundMe campaign that we started,” Trautmann told The Epoch Times. “We were able to raise some money in order to buy the first machine and start making some sand out of glass. And from there, little by little, we just grew.”

After just a few months, the team was able to move into a small warehouse and then later they moved into their current facility, which is approximately 40,000 square feet, and employed six people.

Having studied chemical engineering, the fledging entrepreneur carefully weighed up available options. With no glass manufacturing facilities locally, she and Max went the usable-resource route.

“We didn’t want to ship it far away because that would be a large carbon footprint and expensive” explained Trautmann, “[and] we knew we couldn’t turn it back into new glass.”

They then thought about converting the glass into sand.

“We thought about all the things that sand can be used locally for; the first one being for sandbags, which we use here in New Orleans for flooding,” Trautmann said. “Anytime a hurricane or a big rainstorm is coming, people use sandbags to protect their homes against the water.”

Apart from this, the pair also began thinking about another big problem their state was facing—the coastal erosion crisis—and how sand was needed for big projects. Thus, by recycling glass and converting it into sand, they thought they’d be able to tackle the crisis and restore some of the land.

Explaining the process in detail, Trautmann said people either bring along their glass for free, or it is collected through a pickup program.

The glass is then taken to their warehouse to check if there are no caps or quirks, after which it’s put into a pulverizing machine where it’s crushed into a mixture of sand and gravel.

After it comes out of the machine, it’s then sifted into different sizes so that it’s more uniform.

“Each of those sizes can be used for different things, so the smaller stuff is good for sandblasting and the coarse sand is good for coastal restoration,” she explained. “Gravel is good for, like, rain gardens and making new glass pieces and things like that.”

Glass Half Full has received many awards, including the “Keep Louisiana Beautiful” award. The startup has also been granted a National Science Foundation grant with Tulane University in order to research coastal restoration.

People in Europe and other parts of the world are often shocked that government-run recycling programs are pretty much non-existent in the U.S., said Trautmann.

“They usually say, ‘Oh, we’ve been doing this for 50 years—what’s the issue?'” she said. “But people in the U.S. and North America understand the issues we face and are very excited and impressed by what we’re doing.”

There have also been enormous challenges along the way.

“The first one is funding,” Trautmann lamented. “We’ve never gotten any government money or any large grants; we’ve gotten almost all of our money through small-dollar donations, through GoFundMe. And we’ve just been able to sustain ourselves through that.”

She mentioned that it’s a huge battle to afford a warehouse and machinery, and to be able to pay employees. She hopes, however, that they’ll be able to fundraise more money in the future in order to expand even more because they haven’t been able to keep up with the demand for glass recycling, with there always being more than what they can handle.

When they began their company almost two years ago, they knew nothing in this field, Trautmann said, so they had to learn a lot along the way. They educated themselves on the internet and by talking to experts in the field.

“A lot of people think that they have to know everything before starting or have the right degree, or have all the money or have everything figured out,” Trautmann said. “But really, I think, if you just put your first step forward and start, everything else will kind of fall into place.”

She also has some invaluable words of advice for others out there who want to create an impact in this world.

“A lot of us are getting tired of hearing people just talk about things,” Trautmann said. “I think most young people are realizing that we don’t really have time to just wait for the government or other people to solve all these big issues, we kind of have to do it ourselves if we want to see it done.

“It’s super important to actually take those steps, and take action. The glass-half-full philosophy has carried us throughout all of the hard times.”