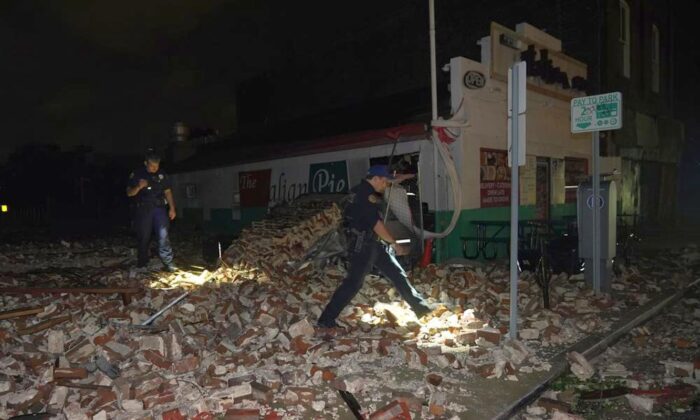 Police look through debris after a building collapsed from the effects of Hurricane Ida in New Orleans on Aug. 30, 2021. (Eric Gay/AP Photo)
US News

New Orleans Entirely Without Power, 911 Service Due to Ida: Officials

All of New Orleans is now without power due to Hurricane Ida, according to the city’s emergency preparedness campaign.

Entergy, the main utility for New Orleans, “confirmed that New Orleans has no power,” and the “only power in the city is coming from generators,” said the city’s NOLA Ready on Twitter.

In a Monday morning update, NOLA Ready said the city’s 911 dispatch service and power both remain out, numerous trees and power lines have been downed, and emergency personnel are responding to incidents on the ground. The 911 service went down briefly on Sunday ahead of the arrival of Ida, which was downgraded to a tropical storm early Monday morning and is now moving to the northeast over Mississippi.

The Orleans Parish Communication District, which serves New Orleans, said on Monday morning that individuals who are in an emergency need to go to their nearest fire station or find their nearest police officer for assistance.

The effects of #Ida has caused service outages at many 9-1-1 centers throughout LA. Our Tech Department has been working with our service vendors to resolve the issue ASAP. If you have an emergency in @CityOfNOLA, please go to the nearest fire station or flag down an officer. pic.twitter.com/uCCJJzUKH2

All eight transmission lines that send power to New Orleans are out of service, according to Entergy.

“Catastrophic damage to our transmission system, all of Orleans Parish is currently without power,” an Entergy spokesperson told WWL-TV.

Gov. John Bel Edwards, a Democrat, urged New Orleans residents to “remain where you are” as the hurricane has brought “many hazards” including flooded roads, downed lines, and debris.

“Now is not the time to leave your home. There is no power. Trees, limbs, and lines are down everywhere. It is not safe to leave your home right now. Please remain sheltered in place,” said the New Orleans Police Department in a tweet.

A hazard that was not mentioned by those officials includes two dozen barges that reportedly broke loose on the Mississippi River due to Ida, which is now classified by the National Hurricane Center as a tropical storm.

St. Bernard Parish President Guy McInnis told CNN on Tuesday morning that the barges may hit other infrastructure in his parish.

“The relentless wind that we’ve been getting over the extended period of time is something that I wasn’t expecting,” McInnis said. “The northerly turn that this storm took kept the edge of the eyeball very close to us; I haven’t seen relentless wind [like this] in my lifetime.”

The city’s Sewerage & Water Board pumps for the drainage and sewage system for New Orleans are also out of power, the city confirmed.

“We are having to run an extremely lean operation without Entergy power. Obviously this is not ideal,” S&WB spokesperson Courtney Barnes told WWL-TV. “We lost at least 12 MW and are continuing to assess.”