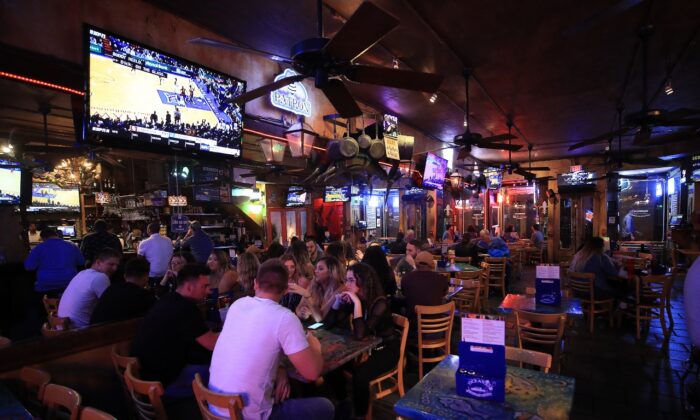 People eat at Oceana Grill on Bourbon Street as Louisiana Governor John Bel Edwards orders bars, gyms and casinos to close until April 13th due to the spread of COVID-19 on March 16, 2020 in New Orleans, Louisiana. Oceana Grill sued Lloyd’s of London to cover losses caused by the government-ordered closures due to the coronavirus. (Chris Graythen/Getty Images)
US News

Oceana Grill, a popular seafood restaurant in New Orleans, has achieved a first-of-its-kind victory in its long-running legal battle to receive payouts from insurer Lloyd’s of London for loss of revenues during its COVID-19 shutdown beginning on March 20, 2020.

On June 15, a Louisiana state court reversed an earlier decision and ruled in favor of the claim for damages brought by the company owning Oceana Grill, Cajun Conti LLC.

Cajun Conti initiated legal action on that same day that the shutdown went into effect in March 2020, seeking damages under its insurance policy with Lloyd’s of London. But the action was not initially successful. In the first trial of its kind, underwriters for the insurer in February 2021 received a favorable judgment from a state court, denying the plaintiff’s petition for declaratory relief.

The June 15 decision is highly significant for businesses that seek compensation for often massive and crippling losses of revenues suffered when they were forced to curtail their operations or cease altogether as COVID-19 swept the country in the early months of 2020.

But the June 15 ruling does not mean that all such businesses will now be able to pursue claims that insurers and courts had previously refused to entertain. Rather, it is likely to benefit the minority of businesses whose insurance policies do not contain exclusions for the contamination of buildings and food, said John Houghtaling, a name partner of the Metairie, Louisiana-based law firm Gauthier Murphy & Houghtaling, which represented Cajun Conti in the litigation.

“I’m not surprised at all by the ruling. The evidence presented at the trial was very compelling,” Houghtaling said.

So far, Cajun Conti’s legal action is the only case of its kind to go to trial, he noted. What sets this case apart from other potential litigation over COVID-related damages is that the counsel for the plaintiff was able to present evidence that the underwriters seeking to defend Lloyd’s of London against the claim were lying, he said.

Houghtaling cited evidence that more than a decade before the onset of COVID-19, representatives of the Insurance Services Office (ISO) met with insurance commissioners across the country, including some in Louisiana, and admitted that insurance policies for business interruption do provide coverage for the contamination of buildings, and the food inside buildings, by viruses.

“They specifically described how viruses can contaminate buildings, how they can contaminate food sources in buildings, and they stated to insurance commissioners that this incurs business interruption losses. They stated all this more than a decade before COVID-19 happened,” Houghtaling recalled.

While he estimated that some 80 percent of the policies held by businesses in the United States include an exemption for such contamination, in this case of Houghtaling’s client, there was no such exemption.

“This was a policy that did not have the exclusion, and we presented evidence that they admitted this years ago,” he said.

Understanding What Is Covered

While he conceded that a majority of businesses may not be able to pursue successful actions for business interruption claims based on the policies they held when COVID-19 struck, Houghtaling believes in the necessity for those companies that do have a claim to step forward.

Part of the issue is a lack of granular knowledge of what is in the insurance policies.

“Unfortunately, not many people know this evidence exists, and not many courts know it exists. We’ve been getting these adverse rulings across the country, because litigants don’t know that the evidence is out there, and cases were thrown out because plaintiffs weren’t able to do discovery,” he said.

But the June 15 ruling offers hope that businesses and the legal community are finally turning a page.

“My hope is that other courts around the country start giving plaintiffs their day in court, because if they do, discovery will come out proving that the position of the insurance carriers in this matter has been a complete and utter sham,” Houghtaling said.

“They know they’re not telling the truth. They know that they admitted that contamination is covered under policies unless it’s excluded,” he added.

A spokesperson for Lloyd’s of London said in an email to the Epoch Times, “I’m sorry but we can’t comment on litigation.”

Ginger Dodd, an attorney for the law firm Phelps Dunbar who has represented the Lloyd’s of London underwriters, did not reply to a request for comment.