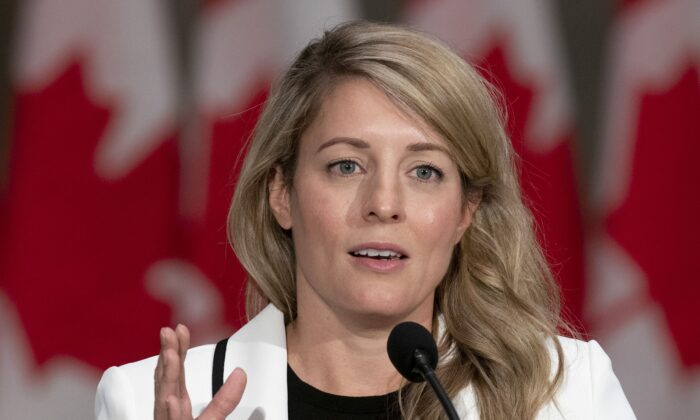 When you hear about our new foreign minister and her priorities, you don’t know whether to laugh, cry, or sigh. Or more precisely, in what order to do all three.

First, the sigh. Among the surprises in Justin Trudeau’s latest cabinet shuffle, gearing up for the vastly great things he had to call the most important election of our lifetimes to undertake since before that he was only prime minister for six years, Marc Garneau was sent into orbit somewhere and Mélanie Joly became “Minister of Foreign Affairs” as head of “Global Affairs Canada.”

That the ministry would have a focus-grouped name that didn’t match the minister is indicative of the frivolity. As is the choice of this person for the job. Whatever one thinks of Canada’s diplomacy down through the years, if one does, being nominally in charge once required something resembling credentials. Or at least the appearance of maturity as with Garneau himself, though his astronaut background wasn’t directly relevant to dealing with exonational Terran carbon-based lifeforms.

Or maybe it was, given how some foreign governments operate. But what in Ms. Joly’s background might possibly lead you to think she had the requisite knowledge or gravitas? And here we laugh, because when he appoints a minister, Trudeau gazes into their eyes, not their resumes.

One of the odd conceits of modern government, especially in Canada, is Walter Bagehot’s belief that all mountains look similar from the top, meaning there’s a particular science of administration done much the same way regardless of ostensible subject. I’m not sure Bagehot knew much about either, but, unfortunately, in one sense his aphorism is very appropriate today.

So now we cry. Policy throughout the Trudeau administration is made by the prime minister when he happens to glance that way, and by the permanent civil service otherwise. In this giant episode of “Yes Minister,” nothing the minister of foreign affairs thinks of independently, if she does, will matter in the least.

At one point Ms. Joly was minister of economic development and official languages. At another, tourism, official languages, and la Francophonie. But that she was also minister responsible for the federal economic development initiative for Northern Ontario for nearly two years does not indicate special expertise in economics. On the contrary, the creation of PrairieCan and PacifiCan indicates the irrelevance of ministers.

Like her being minister of Canadian heritage for almost three years before being demoted to tourism because of the unpopularity in Quebec of Trudeau’s refusal to impose taxes on Netflix. His refusal. Not hers.

She is a lawyer though. And Wikipedia says that “her first book,” titled “Changer les règles du jeu” (“Changing the Rules of the Game” – Oh, that’s original), “dealt with the balance of power between the different levels of government and the division between political powers and the population. It also discussed other issues such as climate change, public transportation, and the growth of social inequalities,” which sounds about as focused and cliché-free as you’d expect from this administration. Meanwhile, the book is inexplicably currently out of stock on Amazon.

Mind you after Trudeau did that creepy grip-and-stare thing, she promised to be “strategic.” If only someone had asked her about Kissinger’s or Metternich’s concept of geopolitics, or Frederick the Great’s “Diplomacy without arms is like music without instruments,” so we could all laugh and cry.

We can anyway, because she read a statement that includes declaring, “The vision that we will have at Global Affairs is one that takes into account that very strategic work that Canada is doing across the world, and it will be a mix of humility and audacity.” Which again could mean anything, but probably doesn’t. Especially because it leaves out things like “effectiveness” and “focus.”

The National Post observed that, asked about her priorities, “Joly cited pandemic recovery, climate change, and ‘social inclusion.’” Which ministry is this again? The Post added, “experts say a key issue Joly will have to be strategic about is the increasingly acrimonious relationship between China and the U.S.” Perhaps. But when she said she has “no illusions” about the Chinese Communist Party and “Our eyes are wide open,” one is inclined to doubt both the fact and its significance.

People don’t get into Trudeau’s inner circle by warning of communist aggression. Besides, the Post noted, she’s “the fifth foreign affairs minister in six years,” before quoting a former Canadian ambassador to China: “I think that Mr. Trudeau does not understand the importance of foreign policy.”

It’s not clear that Trudeau understands the importance of policy period. But it is clear that his views prevail, not those of his demographically impeccable ministers. If his eyes unexpectedly pop open on China, Huawei will be banned from our 5G network. If not, it won’t matter what our mere foreign minister of global affairs and social climate inclusion thinks.